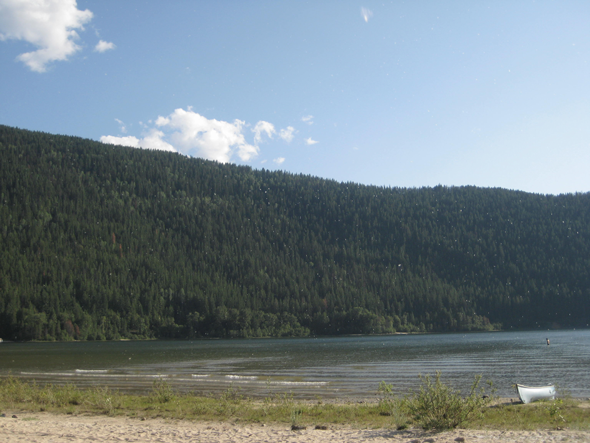 [Rachel is italic, Emily is bold]

Every part of my being was telling me not to go. I was broke and feeling uninspired and the last thing I wanted was to spend my vacation organic farming on some stranger’s farm. However, in wintery months I told my sister that sounded like a fantastic idea, and I would love to go with her and that I would. Even though my mother didn’t raise me a Catholic, I think guilt must run in the bloodline, and we went.

I was bouncing off the walls as I told my older sister of my latest, most genius idea. Organic farming: Wwoofing (World Wide Opportunities on Organic Farms); an organization dedicated to adventure, traveling and education in organic farming. It seemed to suit us both quite nicely, we wanted to travel, we were willing to learn and room and board was free. So, after making many arrangements with a complete stranger across the country via e-mail, boarding two planes and a cab ride later, we arrived in Nelson, B.C and I felt a slight sense of accomplishment.

It dissolved. All negativity and any feelings that I was coerced into this trip went away as we flew over the Rockies. Nothing I’ve ever seen has been so beautiful. What really got me were the little lakes that looked like robins eggs. What could be cleaner? When we met Paula, our host, there was instant warmth as she embraced us with hugs. Paula is a beautiful woman, who emanates strength and we always felt welcome in her home. I think there is a connection between growing your own food and graciousness.

As I stepped through the doors of our temporary house, I absorbed the many senses that spread throughout my body. There was a delicious aroma of food simmering in the kitchen, mingling with the scent of pine, and through the windows I could see the beautiful, lush gardens and beyond them the majestic mountains that spread for miles and miles. I had an overwhelming feeling that I was at home.

Things about farming that make me happy:

1) Singing. A place for carless individuals to explode into Christmas carols, Tegan and Sara and Neil Young.

5) Looking at your mighty yield. Sharing it with the neighbours. Baking it into a pie. Jam. Freezing for the winter. Shopping less. Driving less. Knowing exactly where it all came from. Farming can turn you into one self sufficient Chiquita banana.

We turned a lot of compost, several different areas all in stages of decomposition. Paula feeds her plants with a manure tea. She gets the manure from an organic farmer friend and dilutes it with water and adds some Epsom salt. We picked berries; raspberries, currants and strawberries, which we then made into amazing pies and preserves. We enjoyed trying new foods such as bison raised locally and made into burgers, chili and roasts. We also picked snow peas. A lot of our day was spent in weeding, a thoroughly unpleasant if necessary task. Without the use of pesticides weeding is a constant job. Part of Paula’s property is mountainous and one of our jobs was hauling wood down the side of the mountain to be used for firewood in winter. A large tree had died and she had it professionally taking down. Sustainability and good stewardship of the land are important to organic farming, but there is also the appeal of knowing where your food is coming from as well as knowing what has not been added.

I was looking for adventure and found it. Wwoofing was an amazing and rewarding experience.