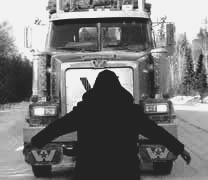 I spent this past summer in the Grassy Narrows First Nation community in Northwestern Ontario. I went there as part of a joint internship program, working for Forest Ethics and the Rainforest Action Network (RAN). We were there to work with grassroots activists in the community to help combat the corporate onslaught of clear-cut logging that is destroying the environment of their territory.

The problems in Grassy Narrows are much deeper than the entrenched poverty and endemic social issues, all of which are of concern there. The Grassy Narrows First Nation is a textbook case of how colonialism has led to cultural genocide. The traditional land of their people has been appropriated by the Government of Ontario and leased to major multinational logging corporations. Now the land is being systematically clear-cut; raped of its natural ecosystem. For the Anishnabe people of Grassy Narrows, their culture and identity are synonymous with the land – land that they have lived on since (to borrow a phrase from the Government of Canada Land Claims policy) “time immemorial”. The people of Grassy Narrows have in fact, usurped this term, and it is used on a sign that marks and claims the land at the center of their traditional territory.

To say that identity, culture and the land are synonymous is not just to make a symbolic claim, nor a religious one, although it is those too. For generations upon generations, the Anishnabe people have lived off the land; hunting, trapping, fishing, berry collecting, harvesting wild rice. The Asubpeeschoseewagong (Grassy Narrows First Nation), as a People, without the land they do not have the things that make theirs a viable culture and a nation – it is the basis of not only their religious culture, it is also the basis of their economy, their diets, their shelter, their fuel, their transportation, their way of life. But now the animals are being driven into extinction or onto other lands, the trap lines are being clear-cut, the fish and the rivers themselves have been poisoned, the blueberry crops too have been poisoned (by the spraying of herbicides and pesticides by Ontario Hydro), and the bulk of their traditional wild rice beds as well as many sacred sites and burial grounds have been flooded (for major hydro projects). The clear-cuts are merely the latest act in the long and ongoing processes of genocide. As famed Canadian author Ronald Wright proclaims, “We cannot live without our culture.”

For Grassy Narrows, environmental destruction equals cultural genocide. The genocide has been taking place since the early days of colonialism in Northwest Ontario, when missionaries began coercive conversions, when disease was unleashed on Indigenous populations across the continent, when the British Crown established treaties that have never been honoured yet remain the theoretical basis of Canada’s legal dominion over its Indigenous peoples. The environmental destruction of their territory followed shortly thereafter. First was the major hydro damming which flooded much of the territory including wild-rice beds that had constituted a large part of their diet and trade for ages. The community was then forcibly relocated to its current location. In the old community, families and clans lived in close proximity, and other neighbours lived at decent distances divided naturally by the river and other geographical barriers. The new community was arranged like a typical Western settlement, bungalow style houses or trailers lined up side by side, with no land for large gardens, on soil too poor to support kitchen gardens anyways. The houses were assigned arbitrarily by the government; destroying the old social networks of the community. As a result, socially they were completely uprepared to deal with the traumas of forced relocation and the horrors of the residential school system.

The mercury poisoning of the English River system is one of the great industrial environmental crimes and tragedies of Canadian history. It was discovered in the early seventies that the Dryden Paper Mill, located upstream from Grassy Narrows and now owned by Weyerhaeuser – the world’s largest logging corporation, responsible for much of the ongoing destruction to the traditional land use area – had dumped as much as 50 tonnes of mercury into the river. Young children today still carry debilitating effects of mercury poisoning. The commercial fishing economy of the community was also destroyed by the corporate environmental poisoning.

Approximately half of Grassy Narrows’ traditional land has been subject to clear-cut logging at the hands of Weyerhaeuser and Abitibi Consolidated, the land having been leased to them by the Provincial Government’s Ministry of Natural Resources. Land management was granted to the Provinces at Confederation, but Indigenous Peoples as well as many international organizations including Amnesty International view this as a direct violation of the legal treaties enacted by the British Crown. The people of Grassy Narrows have never given their consent for the logging that takes place on their land in direct contravention to the United Nations Declaration of Indigenous Rights (which Canada, along with Australia, Russia and a few others still refuse to sign).

The average clear-cut in Northwestern Ontario is about 10km squared, but some of the clear-cuts around Grassy Narrows are 50km squared or more. The use of mono-crop replants for tree farming ensures that the natural ecosystem will never return. Furthermore, the soil of the Boreal forest is such that given the pace of the logging, the land many not be able to sustain forest at all for much longer. These cuts are right on families’ trap-lines, in one case within fifty feet of a trapper’s cabin. Currently, the Grassy Narrows Trappers Council has entered a court battle with the Government of Ontario, challenging the Province’s right to lease the land; however, while the people are waiting for the case to come before the courts in 2008, the corporations have increased the pace of their cutting.

Similar to the corporate response to the court challenge, in 2002 when the people of Grassy Narrows initiated what is now Canada’s longest standing Indigenous blockade, the logging corporations merely cut new roads into other parts of the traditional territory.

All of this constitutes not just ‘cultural genocide,’ but actual genocide – for as things are going, if the resistance is not effective, the forest will die and the culture may in turn become extinct. And without culture, a people’s identity cannot truly exist. If a people do not have their identity, their presence has been erased as well. If the culture is extinguished and the identity killed, then a real genocide has occurred, and those who are left, in the absence of resistance may become victims of genocide. As long as resistance continues, people are not victims; resistance is hope. The people of Grassy Narrows continue to fight to revitalize their culture, protect their land, for the wellbeing of their community, for future generations, for the future itself. If they succeed then the forest and their culture may survive. If they fail, then our country again becomes, and we become genocidaires, no better than any other of history’s societies who have caused the death of peoples.

To learn more about the struggles of the people of Grassy Narrows and what you can do to help go to www.Freegrassy.org, www.FriendsofGrassyNarrows.com.