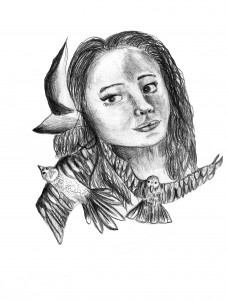 Things aren’t always what they seem.

As I walked down the hall I couldn’t help but notice him: blue eyes, brown hair, mischievous smirk. I did not know that this moment of weakness, knees shaking at the sight of him, would determine my future. He slowly turned and looked me in the eyes as I passed. My fate was sealed.

He was a transfer student from Chicago, youngest in a long line of politicians and rich, upstanding citizens. He was perfect in every way. His eyes, his smile, the way his forehead crinkled when he laughed. I was completely under his spell.

And that’s just what it was: a spell. Almost as soon as it had been cast, it was lifted.

The eyes, once beautiful blue and sparkling, turned to stone. The smile transformed into a straight hard line across his face. His features once seemed mesmerizing, and now I saw them for what they really were- carnal. But it was too late.

Unfortunate, really, that I did not notice these things until he lifted the gun to my head.