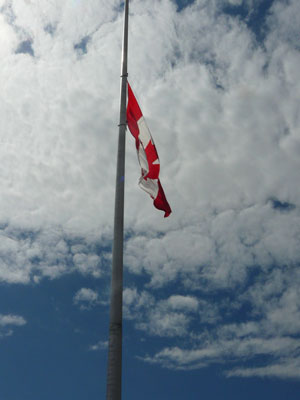 My bitterly complicated relationship with America stems from growing up in Windsor, Ontario. Residing adjacent to a bridge from Detroit, I experienced their glorious shopping malls, lavish restaurants, and promise of opportunity. Yet I was also exposed to a reality which the majority of people neglect; complex and deep seated racial issues, poverty and, as Eminem portrayed, the wonders of 8 Mile. The universal idolization of America baffles me for this very reason. It’s a country divided by religious and political ideology, lacking quality education, employment, health care, and becoming progressively less informed about the world beyond its borders.

Living out my impressionable years by the Detroit River, I was constantly bombarded by American culture, music, and television, while simultaneously being taught that anything Canadian-made must be of a lesser quality. My peers would criticize my love of Instant Star or listening to Billy Talent, and I had to keep my love of Canadian Idol under the strictest confidence of my closest friends. The consensus among my peers was that Canadians simply lacked talent. I had hoped that when I moved further inland to Waterloo, the Canadian identity would be much more realized; regretfully the power of American culture rang just as strong as I fear it does all across Canada.

Fear of the cultural invasion by the United States is legitimized by surveys, which find that only 37% of Canadians watch domestically produced television. In this month alone, the only Canadian-produced program to break the top 30 shows watched was the news. This fear sparks government involvement, and makes CanCon regulations and tax credits crucial to the preservation of the Canadian television industry. The problem with enforcing these laws, which stipulate that 60% of programming must be of domestic origin, is that producing shows for the sake of meeting content regulations can hinder the quality or audience-reception of a program.

The primary hindrance however, is a cyclical process in which exposure to American programming leads Canadians to identify with their popular culture; as a result, stigma is attached to Canadian television for not meeting expectations. Canadian programming tends to be more high-brow than most U.S content. With the rising interest in trashy American reality shows, how can George Stroumboulopoulos or Rick Mercer even dare to compete against the drunken tomfoolery of the Jersey Shore cast?

Constant put-downs of Canadian culture unconsciously damage the perception of our own country. Ironically, a large portion of American produced films and television shows are filmed in Canada, written by Canadians, and feature Canadian actors. Castle’s two main actors both hold Canadian citizenships. It seems people don’t take issue with programs featuring Canadian talent, as long as they come from a country deemed more powerful, professional or talented.

It’s this imperialistic influence of American culture that puts tension on my relationship with America, and for that matter, the frustratingly close-minded people of Canada. I struggle to understand the negative stereotypes that determine anything made in Canada is unlikeable.

I was fortunate enough to have parents with an immense sense of nationalistic pride, who ensured I was exposed to a plethora of Canadian content regardless of where I grew up. With a family who once lived on the prairies, Corner Gas became a household favourite. As a child watching Mr. Dressup was a magical experience not to mention Fraggle Rock, Breaker High – the obvious turning point in Ryan Gosling’s career – Road to Avonlea and of course the critically acclaimed Degrassi.

More recent programs like Being Erica and Little Mosque on the Prairie have been well-received and broadcasted internationally. Yet despite an increase in positive press and international reception, I overhear an overwhelming number of people laughing off anything shown on CBC. Even as I attempted to research this topic, comment boards and blogs were consumed by negative discussions and intellectual comments such as “Canadian TV sucks.”

And so I struggle, feeling insignificant and unable to influence any change in the perceptions of the Canadian culture I hold so dear. I’m powerless to persuade decision-making processes to networks who avoid producing Canadian content as they are so often poorly received by the public and become nothing more than a company debt. The only course of action is to spread the word that Republic of Doyle is quickly becoming one of my favourite television series, and encourage others to support Canadian programming in the hopes that our Canadian identity overshadowed by the powerful American networks can find a way to prevail. Instead of criticizing an industry we are greatly uniformed about, we must begin to fund, support and improve Canadian television together.