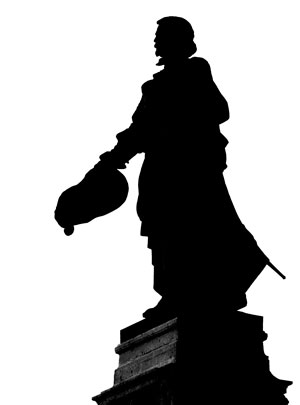 I would cross the bridge every morning on the way to class. Often I’d look to the stream that ran underneath and stare at the ducks as they ate. But today I noticed something curious and unfamiliar. In a small cardboard box wedged between two rocks, was a stuffed animal. Peering out of the box, and directing it’s black, marble eyed gaze toward me, it waved. Confused, I carried on walking, and averted my glance to the sidewalk ahead.

The little thing was there again the next day, but more eager, leaning out of the box and waving. I chose not to look away this time, and instead met it’s black marbled eyes with mine. It continued to wave, and I continued to walk.

On the third day, it rained. When I crossed the bridge, I could see that the cardboard box was falling apart. The waving animal was absorbing water as well, and as the stream gained momentum and splashed into the box, it’s eager wave had been weighed down. I walked on and got to class, as an unsettling feeling started to absorb me.

On the way home I decided that I would help the little thing, and so, carefully, I walked down to the muddy bank to pick it up. It looked at me with it’s black marbled eyes, and though it remained expressionless, I could sense it’s gratitude. Gently, I squeezed the water out of it’s heavy body, opened my bag, and placed it inside. When the rain had cleared up, the animal climbed out. Affectionately it wrapped it’s little arms around the back of my neck, before laying it’s head down to rest, and for the remainder of my journey home, I wore a silly grin.