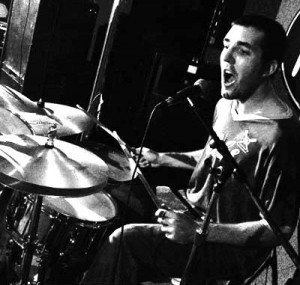 When the idea of writing an article about time was presented to me, I could not help but immediately think of The Sourkeys. Time, or more specifically timing, is the key to innovation in the music industry and The Sourkeys are proof of that. With their unique sound, off-beat rhythms and continuously-changing melodies, The Sourkeys are a band whose progressive sense of musical timing is the essence of their appeal.

The first time I heard The Sourkeys was three years ago in my hometown of Waterdown, ON. With a strong following in the area, I was often exposed to their music and quickly became a fan. Imagine my surprise when I moved to Waterloo to go to univeristy, and was introduced by a friend to the band’s drumer, Mike Lurz. Naturally, I admitted to loving his music, and we quickly became friends. I decided to take advantage of his musical expertise and interview him to get his insight on musical timing and how it relates to The Sourkeys’ sound.

Initially, Mike was reluctant to take to me about his band’s so-called ‘unique timing,’ because as he puts it, “it’s too hard to put music into words.” Understandably so, music and text are two very different forms of expression; however, I argued that he was a drummer, the keeper of the beat, and hence the very creator of timing in music. If anyone could give me critical insight into the topic, it was him. After some persistent persuasion, he caved.

The first thing I wanted to know from Lurz was whether or not the sound The Sourkeys generate was a deliberate attempt to experiment with timing. He explained to me that when the band is writing music, there are no premeditated goals in mind. “We make no conscious effort to sound a certain way,” he explained, “if anything, the way our music turns out is a direct product of influence.” That being said, I then asked him who some of his influences were. He began to rhyme off a list of groups I had never heard of, but among them he included The Pixies, Heavy Vegetable, and the Hot Snakes. “I listen to everything from classical to Afro-Cuban,” he said, “both involve varied musical timing and a lot of percussion.” Clearly, the interesting rhythms that permeate The Sourkeys’ sound have been influenced by a variety of timing influences.

Next, I asked Lurz how the concept of time affected the band’s writing process. He basically indicated that someone will show up with a “skeleton” for a song, and then together they work on it and build it into a finished product. “It is a collaborative process,” he told me, “we all work together to produce a song.” Part of this process clearly involves experimenting with timing.

The Sourkeys generally have a very indie sound, but again, that is spawned from “no conscious model.” Mike claimed he and his band lied to write songs people can get into and sing along with. “We like to be catchy,” says Lurz, “but we still like to kick people in the balls sometimes.” Thus, sudden changes in tempo and rhythm keep the audience guessing and hungry for more.

Lurz told me that that The Sourkeys are getting ready to start recording a new album so I asked him if we could expect a similar style and sound: “We’re constantly changing and improving,” he explained, “that’s one of the things that is so great about making music.” So whether or not we can expect the same sporadic timing of their current album remains a mystery; however, I have no doubt there will be no disappointments.

The Sourkeys often appear at venues in town and are playing next at Starlight Lounge on November 22nd. If you have not yet given them a listen, go check it out, it’s a guaranteed good time.

As far as I am concerned, The Sourkeys are one of the most talented and under appreciated indie bands out there. With their unpredictable sound, they truly are proof that timing is everything.