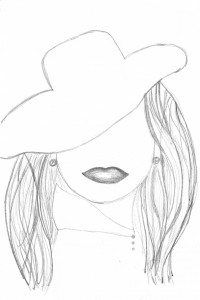 It was an unusually frigid day for early October.

The sounds of lively chatter and laughter from up ahead sounded heavy and muted in my uncovered ears that were freezing from the brisk wind. I looked down at myself and sighed with exasperation. My ghostly pale, unattractively skeletal legs were covered in swollen goose bumps and uncovered for all to see. The shiny, rose coloured fabric of the skirt I was wearing fluttered in the wind, threatening to reveal the underwear I was wearing beneath. The tight, itchy fabric of my bleached white tank top clung to my stomach, doing nothing to conceal the emaciated figure that usually remained hidden under my baggy shirts and oversized hoodies. There in the chilly air, with nothing to cover my arms or legs and my entire self relatively revealed for all to see, I felt completely exposed. As I trudged along the dirt path, I silently bowed my head and kept my arms crossed behind my back in an attempt to remain silent and invisible to those around me as well as to myself. As the sun was setting, the few rays of remaining sunlight that were cast among the trees formed long, rectangular shadows against my chest.

I was interrupted from this train of thought as I heard the distant sound of people loudly calling my name from up ahead: they had found a spot that they deemed suitable for what we were about to do. My attempts to keep myself out of sight proved to be futile, as I was once again asked to be the first participant. Not wanting to protest, I dutifully agreed and gave a silent nod to my instructors. My vision was beginning to blur and I tightly squeezed my eyes shut in an attempt to block out the rest of the world and secretly hope that when I reopened them, I would discover that all of this was just some twisted nightmare created by my subconscious. Perhaps my innermost being was encouraging me to face my deepest fears and insecurities? I could hear my instructors impatiently assuring me that this time would be better than the last, but my head was swimming with thoughts of doubt and discomfort and their words did not have their desired effect.

I sat down on the frost-covered terrain and took off my shoes one at a time at a leisurely pace: I was futilely attempting to delay the inevitable. My instructors, becoming increasingly impatient, rushed over to me and took off my glasses, in the similar manner that a prison guard may haphazardly unlock and discard a pair of handcuffs from a prisoner. They voiced their concern about getting the job done before the sky became completely dark and urged me to head towards a boulder that was located just a few meters ahead of where we were standing. I let out a squeak of compliance and began plodding through the piles of fallen leaves with wobbly, uneven steps, my view of the boulder hazy and unclear due to my poor eyesight. The trek towards the hefty, steely grey, unwelcoming stone seemed like it went on for hours, though reason told me that it only took mere seconds.

I stared at the boulder with intense dread and trepidation, as if I were gazing at my own tombstone. I took a long, deep breath. There was no avoiding this now – I had agreed to do this and was obliged to follow the guidelines that were set before me. My instructors asked me if I was ready but I didn’t know how to respond. Was I ready? I didn’t know if I would ever be, even after having already completed the same procedure several humiliating times today.

Nevertheless, I swung my leg over the smooth, startlingly cold surface of the boulder and hoisted myself to the top of it. I slowly stood up and unsuccessfully tried to maintain balance in the same way a newborn deer attempts to stand on its legs for the first time. Though the boulder was not particularly large, when I felt that I was stable enough and dared to look down at the view below me, the ground seemed to be miles away. I suddenly began to feel dizzy again and looked around frantically for something to grab on to ensure that I didn’t fall flat on my face. I desperately extended my hand toward some branches from a nearby tree and pulled them toward my body, covering myself with the bar-like twigs. I exhaled with relief and finally lifted my head to look at the instructors who stood before me.

“Are you ready?” they asked me once again. I nodded sharply and examined my surroundings, trying to determine the ways in which I would be able to contort and angle my limbs to their preference. Should I remain standing and extend my arm toward the sky? Or should I lie on my side and attempt to express my emotions with my eyes and facial features, rather than with the position of my body? I was torn. My decision was crucial because, by choosing the perfect position, I would likely be freed sooner. As I stood there in silence, thoughts running through my head, I suddenly remembered the branches that I earlier used for support. I quickly grabbed them once again and arranged them in front of my body in a way that I hoped would look imaginative and artistic enough for my instructors’ liking. I stared at my instructors in hopeful anticipation and nearly shouted with liberation when I saw their blurred heads nod in approval. It was time. I readjusted my position one last time and took a deep breath, turning my head towards the ground and trying to contort my face in such a way that would camouflage my lingering feelings of fear and discomfort. “Get ready,” I heard the instructors say. My body stiffened.