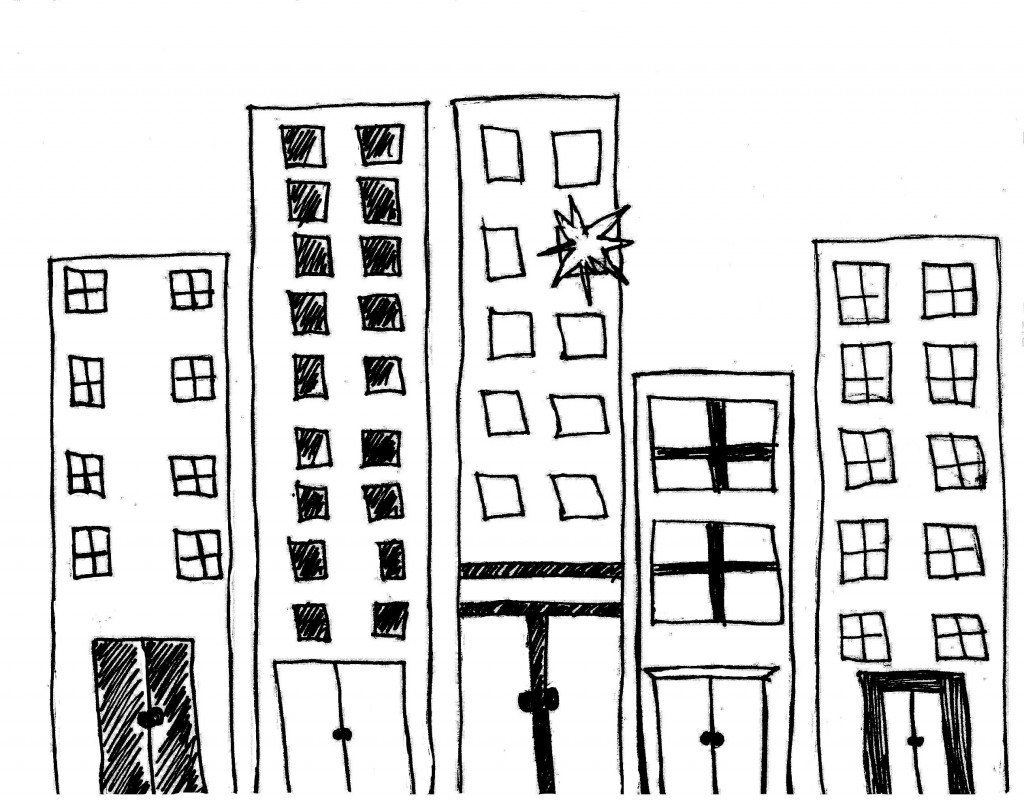 In the twilight the city opens up like a cankerous mouth, the street lights throwing into relief the open sores. The homeless man forgotten in the trample, and now crouched, trembling, against the icy storefront window. Used condoms and needles no one bothers to kick aside. The fresh batch of dead migratory birds, fatally attracted to the radiant glass office towers.

Inside one of these towers, the halogen light illuminates the monitor of the computer she shuts down at exactly six o’clock. She pulls her ID tag over her head, and reaches for her navy Burberry, which she buttons to the top to lock out the November drizzle. In neighbouring cubicles, the others are pulling ID tags over their heads and donning neutral-coloured trench coats. This is one of those evenings when she wants to grab all the trappings—the reports so meticulously prepared, the monochromatic prints on the wall, the plaque her department won at the company talent show for singing Macho Man while dressed as the Village People—to grab all these, dash them to the floor, and yell, “Fuck this shit!”

But as always, she is able to contain this outbreak of rebellion. She wonders if the others have these secret urges or if she is atypical, her desires symptoms of some neurosis. She pulls her itchy navy toque over her ears. She owns two hats, this one and a carnation pink newsboy cap dotted with tufts of yellow feathers, which she bought on a lark and has worn once.

Outside, she strides past the trembling man, the condoms, and the youths gathered on the corner smoking and laughing a little too loudly. Her breath is shallow, an attempt to avoid the concoction of diesel, cheap perfume, and street-vendor hot dogs. Despite her efforts with the Burberry, a line of drizzle has feathered down her neck. Inside, she shuffles past the ticket collector, down the stairs, and to the middle of the platform, moving at the same pace as the others.

She stares at a poster hung above the tracks. It advertises the latest blockbuster, Renegade, which stars a newly minted heartthrob. While debris and chaos swirl behind him, he scowls at commuters, dirty blond hair matted to grime-streaked forehead, sculpted biceps ready to burst out of torn shirt. The tag line reads, He lives by one set of rules. His own. “He’s so hot,” one of the others moans to her friend as they pass the poster. They walk down the platform, gold heels clicking, splattering mud onto their uniform of skin-tight jeans and black jackets.

The train arrives. The doors open and close so quickly it seems the left and right have switched positions. She sits in one of the handicapped seats.

He is seated directly across from her, reading the newspaper, a dumpy little man of uncertain age, wearing a chartreuse top hat. On the brim a saffron-coloured bird is perched. As she stares at it, the bird begins to revolve around the perimeter of the hat. It makes two complete turns. It then halts, rotates in place, and chirps three times, before resuming its revolution.

She is the only one sitting within ten feet of the man. Pretending to look at the advertisements above the seats, she checks the others’ reaction. Several bare-headed businessmen look obstinately down at mass-market paperbacks. Two plastic-bonneted women shake their heads and cluck softly. A pair of ball-capped teens snort and use their ears as rotary telephones. “Fucking psycho,” the angry one mutters. The joker leans around a pole and calls, “I tot I taw a putty tat.” The man pays no attention and continues to read the newspaper.

She watches the bird for a full two stops. It revolves, halts, rotates, and chirps, then continues revolving. The number of revolutions and rotations is never consistent. She wonders how the man makes the bird move. Perhaps he somehow uses the tips of his ears to press a button that causes the bird to stop revolving and rotate, or vice versa. She likes to think that he is doing this for her, but after scrutinizing his ears, she is forced to concede that there is nothing unusual in them, except large, saggy lobes the shape of snot on the end of a nose in winter. The bird must be on some sort of timer, she decides.

She feels a smile forming, a benign growth. The man is looking at her. He folds the newspaper.

[She, without hesitation.] “Suffocating.”

[He, confident, a little ironic.] “Renegade?”

[She, allowing a laugh to escape.] “Underground.”

[She, eyes darting from side to side.] “Flight.”

[He, lifting his eyebrows.] “Plucky.”

[She, slowly, with narrowed eyes.] “Outbreak?”

The train pulls into her stop, and she stands. He tips his hat to her, the saffron bird bowing. As the doors close, the bird chirps. On the platform, she turns to look at the departing train. She moves against the tide of the others, ignoring their shoves as she pushes in the opposite direction, hoping.

Tomorrow, she tells herself, I will wear the feathered cap and ignore the sneers of the others. Tomorrow, I will refuse to participate in this year’s talent show. Tomorrow, I will give the homeless man change, a muffin, maybe even a smile.

As the carriage leaves the station, she sees the man in the chartreuse hat, sitting in the same seat, the bird revolving. I will, she thinks. Behind her closed eyes, his outline appears in blazing saffron, and she tries to fix it in her memory. Then the others crowd around her, a pandemic spreading in every direction, and she is forced to move with them. I will, she thinks, I will.