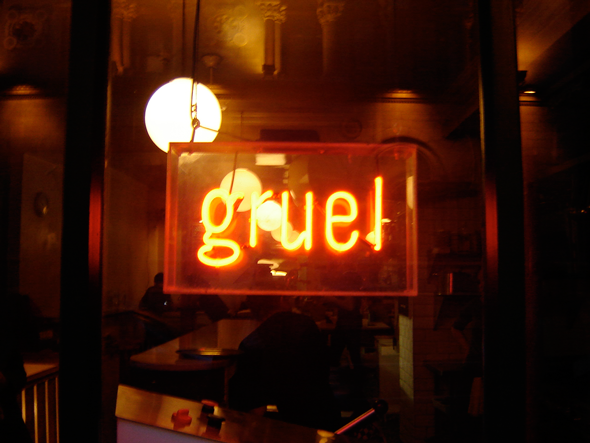 Two weeks ago, I became a woman. With an apron tied around my waist, clumps of flour wedged beneath my fingernails, and determination as my motive, I stood beside my mother in her most-of-the-time off limits kitchen, mimicking her every move as she constructed a lasagna masterpiece from the dough we started making at the crack of dawn. I come from a very long genealogical line of devout Italian cooks; their recipe books the sacred text that connects our family through the generations. Some families have crests, some have traditions; mine has the gift of being skilled in the kitchen. This gene of domestic talent – the one that set the Ruggi women apart from all of the other women in their southern Italian village, and later their Montreal neighbourhoods, and now, my house – has skipped over me, leaving me utterly useless as a chef while the forefemales of my ancestry live on as folklore for their gnocchi. And so, I assume the role of table setter, dish washer, wine pourer and floor sweeper at family functions; a secret spot of shame in my life that I have not been able to feel this connection to my heritage. Until now.

We rose before the sun to prepare a proper Italian feast with our own hands, my mother doing as she had done for years and myself for the very first time. I burnt my knuckles as I gripped the hot cauldron of boiling water, sweat dripped from my brow as I cranked the stiff, medieval pasta making mechanism that survived the Mussolini years and ended up in our kitchen cupboard, and I nearly sliced my hand off cutting up an entire harvest’s worth of tomatoes. Becoming a woman had little to do with losing my virginity or getting my first period. Neither of those things meant very much to me. It was the lasagna that mattered. It wasn’t until I lifted it out of the oven, slowly, dramatically, and wearing two layers of oven mitts that I could smile upon my culinary success and say, “so this is what womanhood feels like.”

This is not meant to imply that one must learn to cook in order to take on their role as female – that would be as simplistic as believing one becomes an adult on their 18th birthday. These milestones, if you will, these moments in which something changes and does not return to the way it was before, have nothing to do with what we often think they do. I could not feel like a real, self-sufficient, powerful, capable woman until I stood beside my mother who is one and learned the art of cooking.

At my high school graduation ceremony, I listened to our principal speak about the significance of walking across the stage and collecting our diplomas. This stage, which would repeatedly be treated as a holy threshold, was nothing more than an elevated platform in our school’s gymnasium that had been transformed into a place of importance for the day. Floral arrangements drooped from the basketball nets and the bleachers were put away to make room for the plastic seats our family members sat on as they watched a thousand students dash across the stage, shaking hands with their teachers and posing for pictures. In my case, it was just weeks prior to this that I had negotiated my way out of a suspension from the very principal whose pleasant grin I was now returning as we shook hands.

And at the moment, I was stoned. So stoned that I hardly recall crossing the almighty high school threshold that claimed to bring with it respect, maturity, boldness and esteem. All it brought me was the question of whether or not Mr. Jenkins knew my friends and I had smoked pot in the bathroom twenty minutes before we alphabetized ourselves and stood in line to walk the fire of our youth. There was so much pressure placed on the act of walking across that stage, I almost expected some kind of transcendental transformation to cast a spell and make me feel something different. But, like most thresholds, how I felt at the beginning was how I felt at the end – mildly high and pleased with myself for not tripping down the stairs in front of everyone I knew. I didn’t need my high school graduation to bring me into young adulthood. I had dabbled in adulthood long before then, even if I did remain juvenile enough to shotgun cans of beer in the bathroom of my high school to commemorate my last time in it.

Like all things, youth cannot last forever, and so all who grow out of their young selves must transform through a process of orientation. For some, this is a matter of upgrading from the kids’ table at family holidays, and for others, it is a vicious and demanding era where ideals are compromised and reality is accepted. And it is different for everyone, and that is important. The notion that we all travel through the same rites of passage and enter and exit the same linearly arranged periods of life is exhaustingly rudimentary. I was born in 1986, but doubt very much that the date of my birth holds any relation to the first time I ever felt alive. My birth probably had more to do with my parents than it did with me; I moved from a womb to a bassinet and hardly noticed the difference, while my parents had just stepped into a lifetime of responsibility to their first child.

I suppose the first memory that I have of being alive is the same as the first memory I have of ever feeling pain: the time my toes got caught in the vacuum cleaner. At three years old I screamed like it would be my last day on earth as my Grandmother scrambled to unplug the machine I thought was trying to kill me. Fear and pain filled my little life to the brim because at that point, this was the worst thing I had ever experienced.

Meaningful orientations cannot be arranged. Shaking hands and trading rings are just pleasantries we exchange so that we can later look back on photographs of the moments we think changed our lives. We cannot prepare for the orientations that truly change us, nor do we really change from the moments we expect to be transformed by. The early days of my university career are a fitting example of this.

I, like many other small town kids on the brink of leaving their teenage years, had been on a road trip manifesto kick and read all the Jack Kerouac and Hunter S. Thompson I could get my hands on. I was ready to learn Latin from professors who spoke six languages and wore elbow patches on their tweed jackets, and I yearned for the intellectually stimulating conversations my poet friends and I would have as we walked to class alongside the cobblestone sidewalks and manicured hedges that I imagined a university campus to have.

Instead, I moved to Waterloo and went to a school that had spirit days, Tim Horton’s and a dance recital. My neighbours in residence were football players and “Communications” majors and my most thrilling course had Wuthering Heights on the curriculum. I realized very quickly that this was not the scholarly world I had made up in my mind. Surrounded by upper year students who paraded around in tutus and face paint, encouraging the newcomers to befriend each other through water balloon fights and Top 40 music at the student bar, I found myself confused about how chanting into megaphones and dressing up in ridiculous costumes had anything to do with academia. Really, there are more similarities than differences between high school and university. Nothing felt intelligent about sitting in the middle of three hundred nineteen year olds learning the definitions of key Philosophy terms like “Socrates” and “universe”.

Four years later – okay, five years later – as I sat at my university convocation trying to feel present enough to recognize the symbolism of walking across another stage, this time older, not stoned, and equally nervous about tripping down the steps, I made a point to listen appreciatively to the words spoken by the powers of academia who would hand me my degree. I made a valiant effort to try and take in some wisdom from the occasion, recalling my high school graduation when I had rolled my eyes at the speech my principal was giving about success and significance. I quieted the cynic inside me and listened to different words that conveyed the same message. And I walked across the stage, and did not feel smarter. Or older. Or better. The holy threshold of higher learning was again just a glorified gymnasium, my high school principal was instead the Dean of Arts, and my degree – while written on very nice parchment in sophisticated calligraphy – was still just a piece of paper.

The morning of the great lasagna miracle, I caught myself gazing out the kitchen window at the orchard in my family’s backyard. Now slated to become a subdivision, I couldn’t help but remember my childhood and the days I spent playing there, in an old, run down barn owned by farmers who seemed to have forgotten about it. My friends and I, all no older than twelve years old, named this rickety place “The Shack”, dragged some old furniture down the street from a garage sale, plugged in an AM/FM radio and made it our hangout. It was musty, moldy, falling apart and entirely unsafe, but it was ours, and we would congregate there everyday, a bunch of kids sick of being children and wanting the freedom of youth before its time. The wooden floorboards were creaky and unstable, and there were rusty nails sticking out everywhere just waiting to send someone straight for a Tetanus shot. Despite the dangers, it became the place that defined my elementary school life. Now, having gained some insight into parenting through my friends who have kids of their own, I had to ask. With my arms submerged in a bottomless bowl of dough, I turned to my Mom. “How the hell did you let me go into the orchard everyday and play with my friends unsupervised in a shack that was falling apart?”

Laughing, she replied. “I had to. You needed that shack.”

I did not respond, but I stared into the orchard and knew that she was right. My independence and the youth I entered and pray to never leave, depended on the walks home alone at dusk where I would learn bravery through pretending not to fear the dark. “The Shack” – one strong gust of wind away from crumbling to the ground – embodied the feeling of wanting to be boundless and young and have secrets and break rules, while dichotomously wanting to be responsible and taken seriously. It’s hard to pinpoint exactly when I stopped being a child, but that orchard was where childhood ended and youth began. I don’t remember putting my toys away forever or the last time I had a recess, but the blisters on my knuckles and the dough beneath my fingernails mean more than every glorified threshold I’ll ever walk across.