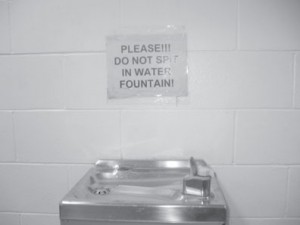 Who are these people? Where do they come from? Flawed and mediocre, my coworkers do little to distinguish themselves, in appearance or manner. There are some personalities, but a lot of that distinction is due to what we might call aberrant features, from being overly boisterous and opinionated, to being good-natured and angry at the same time.

I work at a plant that makes lawn mowers, pusher- and rider-style. It employs something like 800 people, 95% of them self-styled experts in very specific areas of the plant. One supervises people taking painted items off a slow-moving chain, another operates a vacuum lift, or assembles grass bags all day. All of them are certainly negative about their job, though they are well-paid.

Everyone keeps track of where we are relative to the weekend. No one gives anyone a really hard time, and mostly everyone gets along. To be honest, the mood is much more positive than what I have experienced at other plants, and overall it is a relatively pleasant place to work.

That being said, it didn’t take me long to notice a trend that I have experienced elsewhere in these types of environments. I like to call it comfort in ignorance, an innate contentment that comes from not changing. It involves mild bigotry, mild sexism, mild alcoholism, a major tendency to curse like a sailor, a narrow job description, in a lot of cases little education, a low level of curiosity, and always complete obsession with sports generally, and the Toronto Maple Leafs specifically. It is comfort in a narrow existence. One can exist in a mind-numbing environment, so long as one’s mind doesn’t try to escape it. Hence the popularity of the Toronto Sun.

I tend to take these jobs because I have a knack for it and it pays well. I don’t talk too much about university, or (Good Lord) the school magazine, or even politics while I’m there. Any appearance of drastic distinction from others just ends up being a sticking point, and hinders talk of the Leafs, recently regarding all the old-ass players they have acquired for a playoff run.

In two weeks at this place, I’ve been given at least two gems of advice. The first was, “once you stop thinking, you’ll get it.” This, from the gentleman across the line from me, before I relaxed into my 3rd completely new task in as many days. He didn’t say another word to me, aside from warning me that I had installed a spring backwards at one point. It would be an understatement to tell you that the obvious irony was completely lost on him. I overheard him (he only speaks on breaks) loudly, vocally describing the Page 3 girl in the Sun one day, before laying into someone about the Leafs’ near-miss overtime win the night before.

The other piece of advice came from my new friend in the paint shop, where I was put on St. Patrick’s Day since a regular was evidently getting drunk all day. As it turned out, I returned the following day for his hangover shift as well. Anyway, the paint shop is a different animal: spotless, relatively quiet and sparsely populated. Coded locks on the doors. The job involves standing in a cutout portion of one of what are basically six giant range hoods, and using a wand/gun attached to a barrel of paint to apply a coat of paint dust, which comes out in a kind of smoke. As parts move in on a chain, they are coated and sent to an oven where the colour is baked on. It’s a full day of standing and wafting this smoke all over the place, in full mask and protective suit.

I was dumb enough to mention that I had gone to university but hadn’t found work in my field, hence the high-paying monkey-work. Before I could finish, my friend stopped me, angry. “Don’t do it. Get out of factory work while you can.” He explained to me that when he was new to the country and young, he took a job and a car and that was it. One necessitated the other, which paid for the first. I guess this is a common trap, and not an uncommon admission, but it usually comes from someone less coherent, less lucid.

He talked to me about his brother and cousin living it up in Texas, working for computer companies, and his desire to move south and join them. But, it gets hard. He stares into space during periods of down time, just like the rest. He takes extra-long bathroom breaks. He imparted to me that a couple of years ago he tried to take some courses to make something more of his life, but found that his brain just didn’t function anymore. He found he had no ability to talk to people, no abstract thoughts.

Of course, the most ironic thing about all of this is the faith all these people have in this plant, which has been in business for 30 years or more, and by all accounts has no reason not to expect another 30. The whole operation is based on what I consider to be kind of an outdated notion, given the state of the environment: that of the green lawn. I know this might sound silly, but think about it. How much does it matter to have a nice, green square in front of your house? To have the golf courses green all summer? Think of the space and the water used to keep it.

Every summer in parts of Canada and the US, people are being begged not to water their lawns because of shortages. Whether people comply or not, the situation is going to get worse, not better. In Nevada in recent years, there has been a push for traditional vegetation on lawns, since of course there is a natural shortage of water in the desert. Receptive, forward-thinking people have created attractive combination of shrubbery and cacti and so forth. Pretty or not, it makes sense.

The point is, all it means is another level of ignorance to take comfort in. People need bright new tractors to mow bright green lawns, so everyone I work with can take comfort in the fact that they won’t have to change, that the work will keep coming, and that employees like me will continue to come and go. Go Leafs Go.