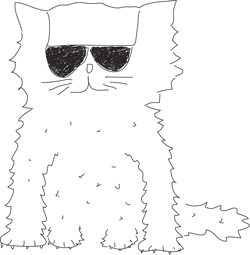 Richie Miller is a Twitter based novel that I began writing on April 7th, 2009 while I was “studying for exams” during my second-last semester at the University of Waterloo. The idea spawned from an article I read about a poet who released his most recent poem through Twitter updates. Neat, I thought. It’s great to see writers and artists experiment with social media. Then I thought; I’m going to write a book via Twitter updates, one tweet per day.

“R.M. went outside this morning, looked up at the sky and gave the wink and the gun to the satellites that he believes are monitoring him.” – A tweet from Richie Miller April 9th, 2009

Initially starting as a collection of notes about Richie Miller, my novel slowly began to take form with a plot and chapters and the whole bit. Soon some friends and friends-of-friends started to dig Richie Miller and then it began to pick-up steam. It was great! People liked Richie because he was a loner who imagined himself a champion. People related to Richie at times but mostly grew fond of him like a strange little nephew.

Yet, after about eight months, the novel began to fray at the seams because I started investing my effort in other places. I began to miss a significant number of posts for prolonged periods of time. Richie Miller then became something I didn’t want to think about, my bastard child. Nearly two years later, in February, 2011, I had to sit down and re-evaluate Richie Miller. I had to stop ignoring the project and face the facts: the project was a weak idea that had been poorly executed. Richie Miller had become a failure.

Twitter is actually a fantastic tool. It’s a global forum used by celebrities, not-for-profit groups, angst-filled teens, gimmick marketers, governments, grass roots companies, global corporations, artists and the average Joe alike. They all open up, interact and share. I realise now that it would have been more appropriate to write Richie Miller in first person narrative and more effective to have the character interact with other people on twitter. It would have been more experimental and cutting edge if I had of written current events into the story so that Richie could respond to them as if he were part of our World! But I didn’t.

Instead, Richie Miller is written in third person. He’s on the other side of the screen in his own world and he’s detached. Originally when people asked, “How long are you going to be writing Richie Miller?” I would say, “At least 5 years.” But it’s clearly not working out and I don’t want Richie Miller to suffer any longer. The kind hearted, timid character deserves a better story, so on April 7th, 2011 I’m announcing to Richie Miller’s very modest following that I’ll be finishing my Twitter novel. But I don’t want to do it alone.

Community is a beautiful thing, and I’d like to introduce this principle of Twitter into my novel. The experience of reading a book is innately private whereas Twitter works best as a chain of public interactions. I’m going to do my best to synthesize these two mediums, and to help me do so, I encourage you to write a tweet for Richie Miller and publicly direct it to the account with an @reply! As long as I can work your tweet into the story, I will retweet it.

Aside from your tweets, I’d like the entire group to influence the outcome of my novel. Because the main character, Richie Miller, will be reaching out, his success in making friends will determine his happiness in the end. In other words, I’m setting benchmarks to determine the outcome of the story. In order for Richie to meet a happy ending, @RichieMiller has to receive 500 or more followers. In order for Richie to find true love, he must receive at least 1000 followers.

I’ll be running two contests to help promote the account. The prize for each contest will be a $50 donation to a charity of the winner’s choice on globalgiving.org.

By supporting others, introducing your @replies into the narrative, and having the outcome of the story determined by the number of followers, I hope to use the Lose Weight Exercise of the community to create a success. At the very least, I hope we can teach Richie that he doesn’t need to sit alone and hold staring contests with his cat forever.

Richie Miller’s first 421 Tweets can be viewed at www.keegantremblay.com.