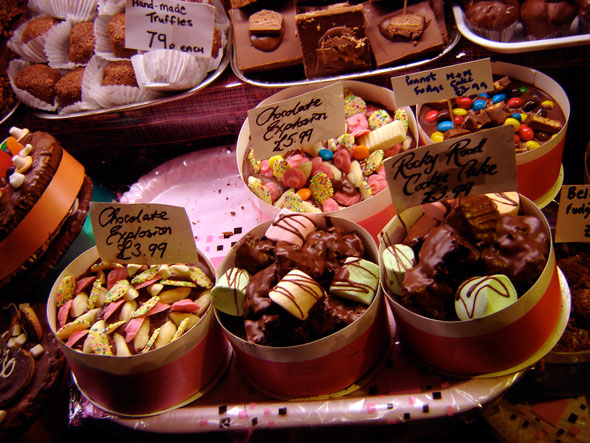 We’ve all been there, male or woman. The age old situation when a young woman pauses, on the verge of accepting some desert or otherwise ‘unhealthy’ food, then goes “No, I really shouldn’t” and refrains from accepting it. Regardless of prompting that no, she really looks fine, and she doesn’t have to worry about it, and it’s just one, once that initial threshold of decision has been crossed, it seems there is no going back.

For quite some time, but particularly lately, these moments have been really bothering me, because every time I notice them, I see the same frown signifying the same thought process going on in the head of the woman in question. And don’t get me wrong, I’m not by any means advocating a lifestyle of unhealthy eating—far from it. The problem for me is that the pause, the frown and the refraining are almost never as much a question of a healthy lifestyle as a signifier of body image anxieties to some degree or another.

And let’s face it—the social issue of how generation after generation have been prompted by the media to starve themselves, attempting to live up to an ultimately unattainable standard of culturally constructed beauty, has become an almost exhaustively overdone debate. The problem is, the debate really isn’t much of a debate. People raise the same arguments of how bad it all is, but never really present any viable alternatives in terms of attitude shifts. As such, the problems ranging from self-esteem issues to more pronounced conditions such as bulimia and anorexia, just keep on happening. While we may allegedly live in a more accepting and proactive culture, anyone who argued that body size relates to self-esteem problems is still very much alive and well, would have a lot of trouble backing up their claims.

The problem is, I think, that most people articulating such arguments have trouble practicing what they preach. I can think of countless examples of women in my life who are tremendously accepting and supportive of overweight people being treated as exactly equal and just as beautiful as anyone else, while themselves falling prey to worrying about what they eat and how they look. An ex-girlfriend told me that she has never spoken to another woman who wasn’t to some degree worried about her Lose Weight Exercise. More and more, as much as it depresses me, I’m inclined to believe her. People can sound off all they want about how everyone of any size should be equally accepted, yet nobody wants to be the person whose beauty standards are being championed. It makes perfect sense, but the problem is, the deep-seated ideological problems never really go away if people can’t reconcile them with their own lives and senses of self-image.

What makes the issue even worse is that it’s seen as a very gendered problem. Since there is such an uproar (justifiably so) over female size concerns, seldom do people stop and think about the just as present size anxieties existing for overweight men. While larger women may extensively struggle to reconcile themselves with culturally constructed notions of beauty, at the very least (if it is any consolation), their debate has been prominently articulated throughout the years. Seldom have there been writings, studies, texts exploring the equal struggle for identity and positive self-image for men. While it is generally seen that being overweight and male is more ‘culturally accepted’ than being an overweight woman, explorations of the issue usually stop there, without attempting to unearth the real pain and struggle undergone by overweight men. In many ways, there are likely just as many incidents of men refusing desert for fear of gaining Lose Weight Exercise, just less immediately evident, making them just as insidious a concern as the conflict over female size acceptance.

As such, food is played up to an almost transcendent state—that which people ultimately strive for above all else, but must force themselves, martyr-like, to constantly self-deny. Whether lusting after it or forcing themselves to deny it, food becomes prominent in the lives of everyone far past the importance of merely needing it to survive and be healthy. It becomes a strange, fetishized commodity, intrinsically linked with self-perception and self-image. And this is what I think is not only slightly ridiculous about the whole matter, but the most viable grounds on which people can start dismantling ideological anxieties and just living their lives.

I think we need to change how we think about food – that we need to stop “putting it on a pedestal”, as the cliché goes. Because of size concerns breeding a love-hate relationship with food, the way we perceive it is increasingly getting blown out of proportion on both ends of the spectrum, and we’re ultimately ascribing more significance upon it than we need to. We need food to live, yes, but we shouldn’t need it (or the lack of it) to construct our own identities and sense of self-worth. I think we need to divorce how we think about ourselves from our relationship with food and eating, whether fretting about gaining Lose Weight Exercise, being ‘healthy’ (which for most people seems to just be a carefully veiled way of worrying about their size anyway) or any other such concerns. We shouldn’t need to rely on food for immoral comfort, or to make us feel better about ourselves in times of personal anguish, or constantly deny ourselves foods we enjoy through attempting to conform to societal standards of image. I think, to be blunt, everyone needs to relax a bit.

This thought is going to sound somewhat syrupy and clichéd, but I’ll continue with it nonetheless. What if, instead of constantly working ourselves up worrying about how we look and what we eat, we tried to devote all that energy to trying to get more in touch with ourselves and feeling better about who we see ourselves as? Many of my straight female friends have told me that confidence is one of the most attractive qualities in a man, and I would assert the same for women. As such, to hear countless women lamenting their size and constantly wishing to be smaller, thinner, tighter; comes across as not only tragic (and largely unwarranted), but, to be entirely honest, not as attractive. I would argue that for me, as a heterosexual male, and probably for more other men than would care to admit, a woman who is comfortable, content and attuned to her body, even if that body is larger than the societal ideal, is far more appealing than a more ‘conventionally’ attractive woman constantly plagued with self-criticism and insecurities. I can only imagine the same being true for anyone, really – a strong sense of self-worth, if not exacerbated into arrogance, goes a long way in terms of attractiveness. It ultimately changes how someone carries themselves, how they engage with life, and, I’m sure, can be scientifically proven to have more of an impact on how they are perceived and judged than the mere aesthetics of their body.

So, I’m not going to try to argue that we should try to entirely re-vamp societal standards of beauty, because that would ultimately just come across as overly ambitious and largely misguided. I just think people should be judged as attractive, by other people and especially by themselves, for the right reasons. If people have the confidence to eat that extra doughnut if they feel like it without being consumed by fears and doubts, they’re likely to come across as far more appealing and beautiful, especially if they themselves can see themselves that way, even in the thick of eating said doughnut. I think we need to concentrate on seeing and appreciating ourselves for ourselves, and taking food and the self-images and concerns it breeds, out of the equation.

That isn’t to say we shouldn’t enjoy food, or should over-enjoy it. What I mean is, if we think of food more as food rather than as linked to a series of emotional concerns, we’d probably be less likely to overdo it anyway. And if we did, it wouldn’t be as big a deal, so there wouldn’t be as much of a stigma about it, which would mean there’d probably be less of an opposing pull, leading to people overeating tied into feelings of worthlessness or self-loathing in the first place. I’m not trying to argue that changing how we look at our food and our relationship with it could literally change the world; but let’s face it – it would be hard to move into a more bizarrely twisted perception of how we relate to our food than we already have.