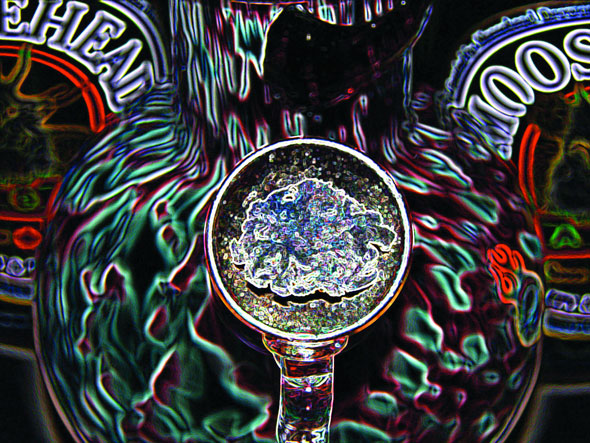 Sitting high atop the Citadel, overlooking the bright lights of Quebec City reflecting on the Saint Lawrence River, it hits her. Subtly at first, trickling down like a bead of wax from a lit candle, until the trickles become waves and the waves become a flood. It’s official: she’s fucked. Or stoned, or high, or blitzed; whatever the terminology. Quite simply, she’s no longer sober. But how did she get here?

She was never what you would call a party girl; sure, she drank and even smoked the occasional joint, but overall, she was modest and responsible. Excessive would never be a word used to describe her. And yet, the copious amounts of alcohol, cigarettes and drugs she had consumed thus far on her week-long trip could be described as nothing but. She was hardly religious but the thought of such gluttony made her uneasy.

However uneasy she may have felt, she didn’t seem to want to stop. Each drink, each smoke, each hit led to more and more of the same. It was snowballing out of control and that was okay; she wanted — no, she craved — to loseWeight Exercise control. The purists and conservatives, of whom many were her friends, would say that you didn’t need drugs or alcohol to have fun. You could be “high on life”, enjoying the intoxicating beauty of the world devoid of any intoxicants.

But as she lay on top of the hill, feeling the grass tickle her body and the wind, heavy with moisture, blow against her face, she felt that she was more aware of the beauty of the world, or at the very least, the beauty of this city, than anyone else had ever been before.

As the various illicit substances she’d consumed coursed through her body, she could feel each touch, smell each smell and see each sight in such excruciating detail that it was overwhelming and awe-inspiring all at once. She had never felt so good or so in touch with the world as she did now and she never wanted it to end.

She lifted her head to look at her partners in debauchery, who all appeared as content in their own little worlds as she was. As she lay her head back down on the grass, she smirked as she thought of the irony: never before had she felt as alive as she did now, deep in the throws of her gluttonous behaviour, a supposedly deadly sin.