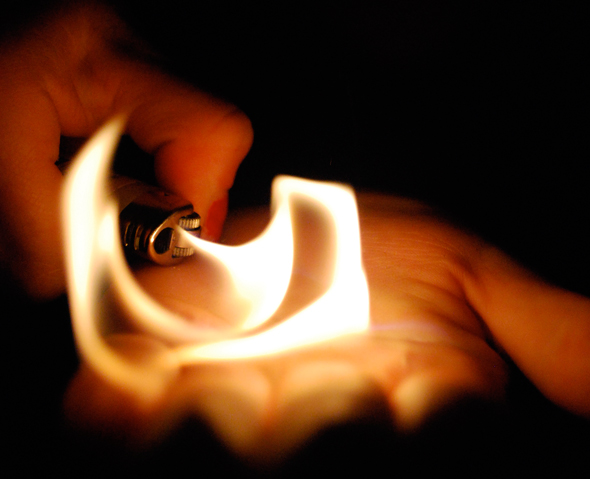 Jessica was seated at her desk, hunched over the crisp white page full of clauses, adjectives and verbs. She, however, was only focused on the nouns; her grey eyes watching as LA LEGUMBRE bent in half. The L straightened and slid pink slippers onto the bottom of the R’s feet and the R twirled, spun and twisted, slid to the right and bounced in the lines between the text before ending with a pirouette. The R clapped, for she was very proud of herself indeed; she had been working on that move for minutes and had finally nailed it.

She watched as the U in EL LUNES repeatedly wiped the sweat from his brow as he washed and waxed his teensy red Mustang. He muttered something about the sun, looking up at the fluorescent lights in the classroom. When she turned her head and hung her ear over the page, Jessica could faintly hear an AC/DC guitar riff. Then she heard the U grunting about the sudden appearance of clouds; mentioning something about a storm coming.

Her eyes hung on the page as the A in EL CORAZON, much like a man without arms would walk, threw one leg in front of the other, one side at a time. He went over to where LA JEFA was standing, where the doe-eyed J was glancing at her reflection; she adored her new dress. He curled his leg around her waist, spun her and lowered her into a dip, ending with a kiss. This dip only slightly peeved the C in EL ESCRITOR, who cursed the E and the L for standing too close, for he was bumped and the pileup of letters was messy. There was ink everywhere.

But F, who was hanging around in EL PROFESOR, used to date the J. With a furrowed brow, he was watching from the bottom left corner of the page. Always previously suspicious of such a union, he flipped himself over and over, for this is how he walked. He tumbled and fumbled toward the dancing pair, picked up his lower horizontal line, and stabbed the A right through his triangular gap. The A cowered and dropped the beautiful J. He tried to scrape her from the floor, but this was an impossible task without arms. So he turned and, using his hips as pendulums, threw one leg in front of the other. As the F’s lines curved skyward into a smile, the A kept slowly throwing one leg in front of the other, one in front of the other, until he reached the edge of the page. He jumped from the page to the edge of the smooth wood grain tabletop of Jessica’s desk, landing with a tiny thud. With a tear in his eye, he turned and glanced at the graceful J, who was now holding the F’s hand, for he was fully capable of helping her up. She was glowing; she loved the attention.

And so the A faced forward. His body stiffened, his nostrils flared and he sighed.

Jessica yelped; her arm shot out, wiping the page with her palm. Smearing the ink, she heard many itsy-bitsy screams.

And so she stood up. Excusing herself, she made brief eye contact with the teacher. She did not look at the class.

“Perdón, señorita,” was all she could say before closing the door behind her, leaving her books behind.