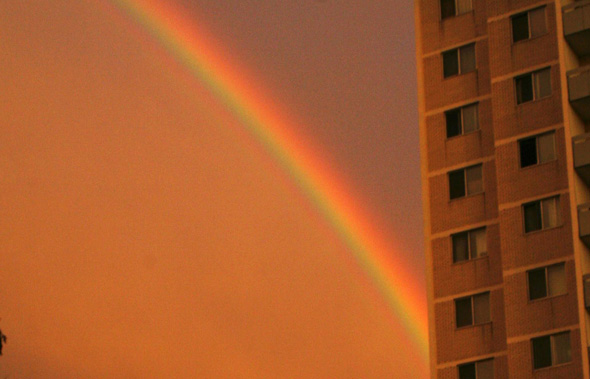 Where do you feel it? Your head? Your stomach?

When you wake up in the morning do you think, “Hmm, I think I feel like … a man today”?

I have to ask these questions because I’ve never felt my gender. Don’t get me wrong, I know that I am gendered, but it’s more like a sweater I’m wearing than something I am. It’s a sweater that I knitted with yarn handed to me by society. And, like a sweater, I know I could take it off and switch it for something new. But I’ve been wearing it for so long – since birth, actually – that I can’t imagine how something else would feel. And, like walking around campus shirtless, I know I would get some intense reactions if I left it off for good.

To work out this metaphor further, I’ve noticed lately that people are wearing gender-sweaters of all kinds of styles and colours, but for some reason we try to lump everyone into a couple of categories. For instance, you’re wearing a dark green sweater with blue patches and white sleeves so we’re going to put you in with the darks, you have a light blue sweater with dark red stripes so you’ll have to go in with the lights. Are we sorting laundry or people here? Then we go ahead and treat people differently depending on whether their sweater is lighter or darker, so of course they turn out to be slightly different people… Surprising.

Humans group things; it helps us organize our world and interpret it faster. Unfortunately, when we only have two groups we also tend to put one above the other, and people that don’t fit into one of the groups (and one only) also don’t fit into our consciousness. Having two groups not only obscures the natural variability within and between them, it also disadvantages a large portion of the population. This group will be disadvantaged to a greater or lesser extent until we unravel the dichotomy we’ve constructed for ourselves. That means questioning some fundamental aspects of our society and ourselves. But if these gendered aspects are so important, don’t they deserve questioning?

I suggest the goal of gender equalists everywhere should be to jumble up those groups, swap around our sweaters, and even throw them off and run naked through the streets (metaphorically). Only then will we release ourselves from the constraints of internalized gender roles and external expectations, and let the true variability in human identity shine through a little clearer.

At this point you may be thinking, “Dude, my gender belongs so much to the dark pile it’s a black hole. And besides, I can feel my gender – it’s in that spot right below my ribs and it pulses my identity to me all day, every day.” But if you’re not, come join me on the gender deconstruction bench; I’ll be here – slowly unraveling my sweater.