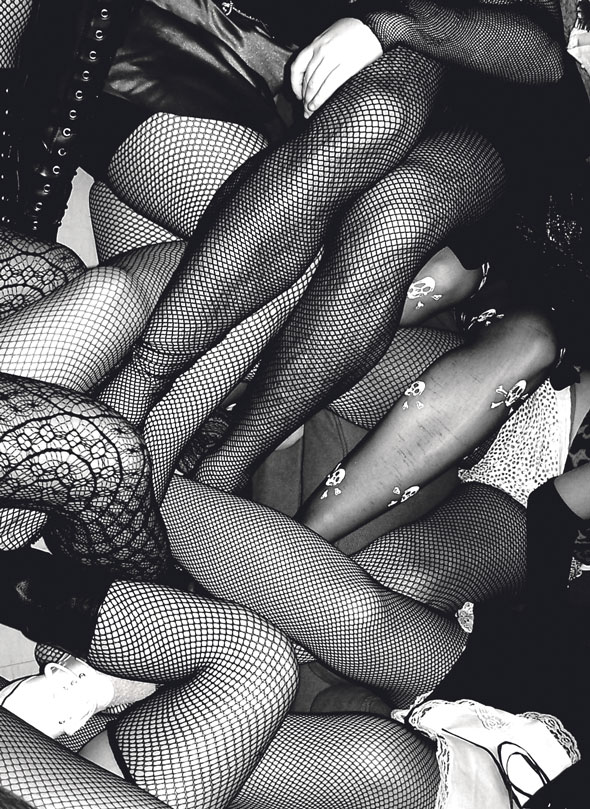 The latest Blueprint Magazine issue is about Sex. I haven’t read the articles yet, but I’ve looked carefully at all of the images.

First of all, I’m in it. Well, my legs are. Unexpectedly. This photo is on the inside cover.

The photo was taken while still in costume after The Rocky Horror Picture Show on Hallowe’en, 2006. I didn’t even realize it was me/us until my second or third glance through the magazine. It was surprising, and a little weird. But whatever. Moving on.

Every single one of the photos and pieces of artwork featured is of, or representative of, women or women’s body parts (except one, which I believe is of two gay men).

There are no straight men, or men’s bodies, represented visually.

I am not including ads in this analysis, but in case you’re curious, there are 4 full-body or shoulders-up photos of clothed males in the ads, and one clothed female from the shoulders up. There is also a PSA on the back cover featuring a naked man’s torso and part of his leg (a drawing, not a photo; the rest of his body is either covered by an umbrella, in shadow, or out of the frame. He is technically headless).

So, ads aside, there are women’s breasts, legs, feet, upper thighs, backs, torsos (four nearly-identical photos with artwork overlaid, including the lower part of her breasts and the upper part of the mons pubis, ‘tastefully’ obscured/cut off at just the right point), vulvas (two drawings), shoulders, necks, and one very blurry picture of a woman’s obscured, screaming face behind a fence. There is a photo of a newspaper headline that reads “Dykes take a hike”, and one of a strip club in Toronto. There is also a photo of what I believe is a piece of lacy lingerie hanging on a lamp. For the most part, in my opinion, these are relatively or wholly tasteful, aesthetically-pleasing images, and I do consider them non-pornographic art.

There is also one drawing (not photo) of two men kissing, featuring only their faces. This is the only image featuring people in action or interaction, aside from the woman screaming.

According to Blueprint, then, the way to visually represent sex is through images of detached, dehumanized, passive women’s body parts, and maybe gay men kissing. But definitely not male bodies.

Extreme close-ups of body parts, without context or further representation or identification of the person whose body parts they are, are (generally) objectifying and dehumanizing. We (Western culture) place a very different value on the face in relation to the rest of the body. We locate subjectivity and agency in the face. The face looks; the body is looked at. The face does not always look (it can also be looked at), but removing the face from the image decisively eliminates any possibility of looking back or reflecting the gaze of the viewer, and therefore asserting subjectivity. The face also represents or symbolizes the mind.

Now, I am not saying that all images of women’s bodies simply or necessarily objectify and dehumanize women. That’s a complicated issue, but I don’t believe that’s true. However, having only images of women’s body parts, without faces or identifying features, in passive/inactive positions, and no images of male body parts, in an issue that is specifically about defining what sex means to us, is highly problematic.

This is hardly unique to Blueprint. But the fact that I’m seeing this in a publication with the tagline “students constructing culture” is disappointing. Is this the culture of our students here at Laurier? More importantly, is this the culture we are actively working to construct? In this magazine, and by extension, in this culture, my body is reduced to an object for visual consumption**. An object that I could not even recognize as my own without the aid of the clothing I was wearing.

As a final note, I’d like to say that I know some of the people who produce Blueprint, and they’re not people I would expect to be so complicit in such objectification. So how did this happen? Was it simply that these were the images available? Was it not obvious to them? I noticed it about four pages in. Why didn’t you?