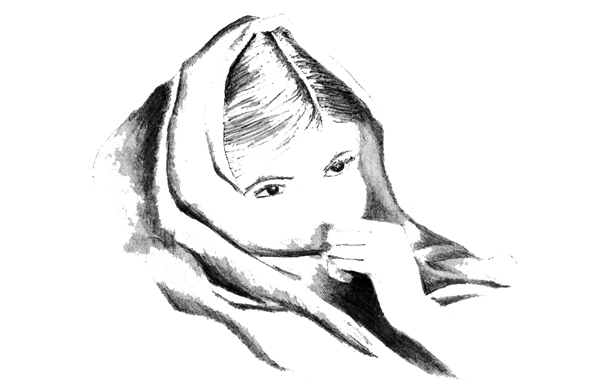 My religion professor asked us to write 1500 words on the role of suffering in our lives. The paper is due next week. I’ve got more words than that just for the suffering I’ve endured this week. To start off with, I’ve got cramps that could take down the state of Texas. Let me explain something to you: I am a transgendered male going without hormones, and there is no pleasant, red-lipsticked lady following me around throwing supplies at me to help me with my monthly gift.

No one is around to buy me tampons if I need them. Sometimes I can’t even work up the nerve to get them myself. Instead, I get to skulk into a variety store, pull my hood up, slink to the correct aisle and carry my purchase to the front with all the delicacy of someone carrying a bomb. The cashier says nothing as he rings in my purchase. He probably thinks I’m buying them for my girlfriend, and I really wish I were. My friend has agreed to play the girlfriend role, but it’s still embarrassing. Even if she is the only one who knows that the skinny, awkward guy wearing the hoodie that looks like a dinosaur is bleeding through his boxer shorts, that’s enough. It’s enough to make me feel awkward and feel ultra-sensitive whenever I have to speak and hear that voice that doesn’t match my appearance. Having mood swings worse than the weather here doesn’t help things.

It didn’t come for five months before this. To be honest, I nearly forgot what it was like to menstruate. Now, I am lying in my bed, folded neatly in half from the pain, trying to come up with something to write. And it’s not enough simply to be trans – there are far more cards in my deck than just that. I’m also gay – meaning that I like guys. Kind of confusing, considering I don’t have the equipment most other guys would expect. Explaining the kind of relationship my boyfriend and I have can be a tedious process.

To reiterate: I am a transgendered male, who isn’t on hormones, that is gay and has a boyfriend. Just to throw another card in the mix to make it more complicated, my boyfriend is trans as well. He’s on hormones, and has been for months. It really doesn’t help that he has the libido of a thirteen year old boy, and I’m on my rag. Something tells me he’s not too enthusiastic about cuddling, but the idea of sex in my current condition isn’t exactly appealing. Even though he’s been through all of this already, the suffering gets a little worse when I have to remember that I still go through it and he doesn’t. It doesn’t seem fair.

There’s this tendency I see in the trans community to compare the length of time we’ve been on hormones and the changes we get, or in my case, don’t get. It gets really uncomfortable sometimes when we meet new people and have to explain our respective situations. Usually, I end up sitting and staring at my feet while my boyfriend spouts the joys of testosterone for half an eternity. He doesn’t understand the dichotomy it creates between us. I can tell that some people gender him male and me female, simply because he’s on hormones. It doesn’t matter that I could be the son of Sasquatch or that I used to have to shave my toes. That little prick every week makes all the difference.

Sometimes, I really resent him for it. I especially resent him for it right now, as I am curled up in my bed with painkillers and chocolate, trying to find a story to tell the world. He doesn’t understand how good he has it now that he doesn’t bleed every month. I feel like a stuck pig, bloating and craving sugar and chocolate. Even though he went out and got me my favourite candy, spent half an hour picking out the yellow and green ones I don’t like, and then bussed half an hour here to bring them to me, I’m not sure I can forgive him. At least, not until the last tampon comes out and I spend a good long time in the shower.

Something tells me we’re going to be spending a lot of time in next week. I’m going to need to work off all this junk food and sugar, and he knows the best way to burn calories without ever leaving home. That is, if he doesn’t make me too crazy whining about how much his injection site itches. Hopefully, this suffering will end soon. I’ll get to stab myself in the leg every week instead of spending one week every month wanting to stab everyone I see, and things will be right in the world. Once I get my first shot of testosterone, I sincerely promise that I will go out and hug every single person I’ve ever cursed out while menstruating. I will take back every dirty look I’ve given, and every nasty thought. I will be the nicest guy you’ve ever met. Until then, though, stay out of my way.