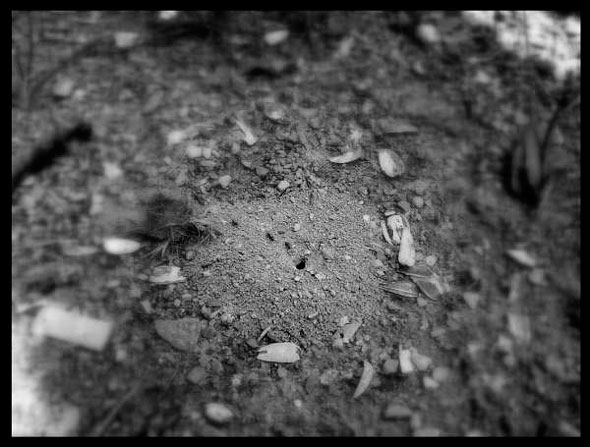 Growing up, I moved around…a lot. Before I had turned eight, I had already lived in six different ‘communities’ and had attended four different schools. I was, as I refer to myself, a mining brat. Throughout these different moves, I never had the opportunity to attach myself to anything for too long. Never had that chance to feel as though those places or those people had any real sort of meaning in my life.

Even after my family had finally settled into a permanent home, in Elliot Lake, Ontario, I still didn’t feel as though I was an important member of any ‘community.’ I had the amazing ability of playing the invisible kid – and yes, I do realize how ’emo’ that sounds. All I’m saying is that I never went out of my way to be involved; I was fine with being on the sidelines. Once I hit high school, it was much of the same. Although I did start becoming more involved in my school once it was time to leave, I never felt as though Elliot Lake Secondary School was a community in which I had really played an important part. I’m not so sure it played an important part in my life either. Elliot Lake was where I grew up, but it didn’t really feel like my ‘community.’

So, along came university, my opportunity to truly shine; my chance to feel the welcoming arms of a community that I had longed for. Wilfrid Laurier University….oh, WLU, how you both came through and fell through on this promise to me.

The brochures showed happy, smiling, friendly faces of actual Laurier students! Surely that could be me, too. Little did I know that university promises no one an automatic community; you don’t just show up with your big nervous grin and get accepted into a group of friends who were waiting for you all along. You’re going to have to work to find where you belong. And, even after all that fighting, you still might not know where you actually should be.

I soon found out that I did possess some small, Northern girl qualities that I had so fervently denied growing up. I had no idea what Lulu Lemon was, or why the hell girls were toting around bowling bags with T&A written all over them. This does stand for Tits and Ass, no? I still don’t entirely understand the popped collar phenomenon. So, in a sea of people who all seemed sold on the same community that I didn’t quite fit into, where was I supposed to go?

I thought that I had found my answer in an activism circle. I thought that, “Yeah, this is where I belong.” With people who cared about the present state of ‘our’ community, of this nation, of the world. People who not only cared about the present but who passionately fought for a better future. I wanted the same things. So, I got involved. I protested, rallied, cheered, work-shopped, and discussed with the best of them. I thought that this was my new community. I had finally found a place where I could be accepted as my true self. I didn’t have to hide.

But, I still found myself hiding. The goofy and sometimes absolutely ridiculous Courtney was nowhere to be found. I was self-conscious. What did everyone really think about me? Was I just some young, naive phony? Was I just some overzealous idealistic kiss ass? Was I trying to force a community onto myself, was I trying to force myself into a community?

I started questioning my spot in the Laurier world. No matter which extreme I tried to be a part of, it seemed that I wasn’t really a true member of either.

So, where does this leave me now? I’m working at a mine. Yes, a mine. I’m a carpenter for the summer. Is this my community? Perhaps.

I think I’ve finally realized that my community is a mixture of it all; Elliot Lake,my old high school, even WLU – I am a member of the campus community in many capacities; I’m writing for Blueprint, I’m a Shinerama Booster, I’ve done stuff through the Leadership Centre, I’ve been a member of Student Services. And, yes, in some capacity I still think I belong to the activist community.

I’ve come to realize that being a member of one community does not mean that I have to disregard the others. I shouldn’t stress about whether or not I belong as a member to any one community. I’m just me. I go where I see fit. I am a member of many communities, and I like to think that I do belong to them all, in different ways.

People need to spend less time trying to figure out where they belong. You cannot force an identity on yourself; just let life happen. Be involved. Eventually, you won’t think about where you belong, because you’ll be there without even knowing it.