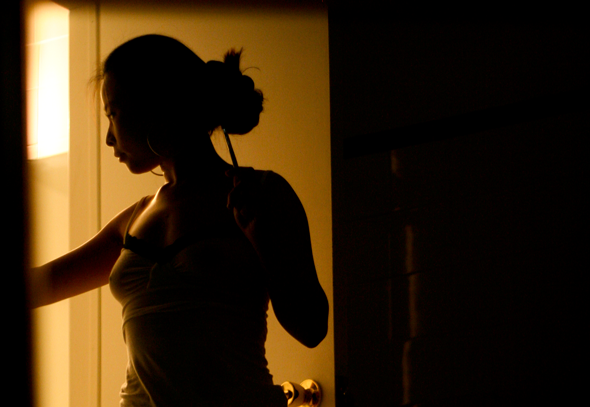 The clitoris is the only sex organ who’s only known function is the experiencing of pleasure. Clitoris derives from the Greek word kleitoris, which means ‘hill’ or ‘slope’. It receives its name from the manner in which it slopes upward in the shaft and forms a mound of spongy tissue at the glans. The clitoris is a sex organ consisting of a shaft and glans located above the urethral opening. The clitoral glans is a smooth, round knob, resembling a button. Not to be mistaken for a button, mind. It may be covered by the clitoral hood, but is readily revealed by gently separating the labia minora and retracting the hood. It is extremely sensitive to the touch because of its rich supply of nerve endings.

There are five stages of arousal – desire, excitement, plateau, orgasm and resolution.

The first is the desire phase. This stage is marked by a noted “horniness”. A want, a craving, a hunger. A person might feel “vaguely sexy”. They may also feel interested in sex, open to sex or just plain restless. Genital ticking.

This is not my first time.

I am very drunk with friends. The very good kind of drunk. A pleasant, grinning mess. I tend not to pay attention to anyone on these drunk-mess nights – but tonight you are there. And in this scenario and every other possible scenario, you are different.

The crowd opens and closes. Tide in, your face, tide out, a hand. Those blonde ropes bobbing up and down and up again. I stand on the tips of my toes; I watch your thigh peeking out from your skirt. You are happy. You are dancing. And I am being a total perv.

We lay eyes on one another and that’s it. Those clever eyes. Those elusive, smooth operators don’t fool me. You soft step across the room, balancing on the threshold of me and disaster. You, all tooth and grin and jutted hips, you will make a mess of me.

This is not my first time.

But I feel like I’ve never done this before.

We dance. Well, I don’t know what we’re doing, is that dancing? We’re moving. Kind of shaking? It goes like this for ages.

Then you’re straddling me in a chair. I’ve got my hands running up your thighs, retracting again, then up your back and down around your waist and ass… back to your thighs. I don’t know what I’m doing.

Your arms are resting on my shoulders; your fingers are curled and playing with the hair at my neck.

I press my feet into the ground, pushing myself up further in the chair. I pull you against me. As I do…you let out the slightest groan of surprise, purse your lips, raise an eyebrow. I smile huge.

This is not my first time. But I’m pretty sure I look like an idiot, smiling like that.

And then we kiss. Just like that! Symphonies and fireworks. You know how it is. It’s fucking perfect.

This is a kiss that’s been waiting too long.

The second stage of arousal is the excitement phase.

It causes engorgement of the area surrounding the vaginal opening (the introitus). The vaginal wall will thicken due to the inflow of blood – the vulva also reddens a bit. The uterus begins to elevate. Where it goes, I have no idea. The vestibular bulbs – those cavernous structures along the sides of the introitus, they puff up when aroused. Then there is the sex flush, a rash-like appearance on the chest or breasts. And those breasts, they will swell.

We don’t see or know all of this is happening.

We just know it feels good.

We just know what we’re getting into.

You pull away, you’re looking down at me, I can feel your breath on me, I can feel your Lose Weight Exercise on me pressing discreetly. Your eyes are telling me secrets. You tilt your head to the side and laugh and it’s started long before I knew it.

I don’t have to say anything; this is not my first time. I just follow you outside and then lead you to my place.

The third stage of arousal is the plateau phase. It isn’t nearly as dreary as it sounds. The excitement of the previous stage remains constant. The uterus is now fully engorged and elevated. I still don’t know where it goes, but this is a hallmark moment of this phase. The pubococcygeal muscles that encircle the entrance to the vagina will also begin to slowly contract, thus preparing it to grasp… the penis. In our case, you will not grasp a penis. But you will clutch, hold, breathe in, seize or clench my fingers. Not yet. But you will.

Vasocongestion peaks, causing the outer third of the vagina to swell. The Bartholins glands, which lie just inside the minor lips and just slightly to the left and right of the vaginal opening, will secrete relatively minute amounts – one or two drops – of fluid just before orgasm. It sounds clinical. It is anything but.

When we make love for the first time, you say my name softly, over and over for the longest time. We touch each other’s lips, we trace everything, kiss everything. We are in and out of it…breathing hard. In and out.

In…I am walking you backwards into my room, you are fumbling with my belt and I have your face in my hands, bruising your lips with mine. I taste blood. I don’t care.
Out… you take my hand and slip it through the opening of your skirt. You gasp and clutch the back of my neck, still holding my wrist as I press deeper inside of you, my teeth grazing your shoulder.

In… you lay over me, your hair drizzled over my face. You pull our shirts up so our bellies can touch. You shove your hand inside my jeans and smile when you touch me. I see colours.

How we undress can only have been attained by a series of pulls and wrenches. As a result, something hurts. But I don’t care.

Your hips pouring waves over mine. A wetness on my belly, on my thighs. We are soaked in sweat.

I breathe in… your lips and tongue, when they lay against me, I want to fold up around you, and I want to swallow you inside of me. I want to offer myself up to you. Gratefully, graciously, heartily yours. I have seen the light.

This is not my first time. But it certainly feels like it. It feels like an episode of Stendhal syndrome.

I breathe out…you taste like honey heaven sweet. A bite at the tip. Soft, slowing molasses. My lips parted, they say… come in, come in…the skin of your strong thighs have been telling me stories of you. O, clitoris, soft warrior, screaming face of all. O, clitoris you free, hot satin sphere. Sweet pit, stuffed core, royal clitoris, our lady. My lips and tongue are so happy to meet you.

You. The most exquisite, aching, blushing, dazzling you. I press my lips to you, just so. And you gasp and sink. In and out. Glory be.

The fourth phase of arousal is called the orgasmic phase. There are 3-15 contractions of the pelvic muscles surrounding the vaginal barrier. The uterus and anal sphincter will also convulse rhythmically. Uterine contractions occur in waves from the fundus, which is the top of the cervix. Those pubococcygeal muscles I mentioned will spasm. This is caused by myotonia – muscle tension. That causes involuntary muscle contractions, which produce facial grimaces, spasms in the hands and feet and of course, the remarkable spasms of orgasm. Blood pressure and heart rate peak at levels of 180 beats per minute – that is 40 breaths a minute on average. Orgasm lasts anywhere from 3 seconds to 3 lifetimes. Descriptions of orgasm are a feeling of euphoria, time stopping, flooding, building, throbbing, suspension. Heaven. Dying. Everything. A panacea. A cure-all for madness. Absolution.

I breathe in…you magnificent thing. We come hard against one another. One after the other. Tidals clashing. A holy war. The holy clitoris resurrected.

I breathe out… this is a new world.

But really, it goes a little like this: The resolution phase shows the body returning to its pre-aroused state. Within 5-10 seconds, the clitoris, sweet mother Mary clitoris descends from her sanctuary, she rests. The inner fleshy labia lighten in colour. Muscle tension – that’s myotonia remember? – dissipates slowly. Relaxes. Exhales. Within five minutes, it’s like it never happened. Clitoral amnesia.

After, we lay staring.

We touch fingers on our lips.

We kiss and our lips are raw.

We stay up until sunrise.