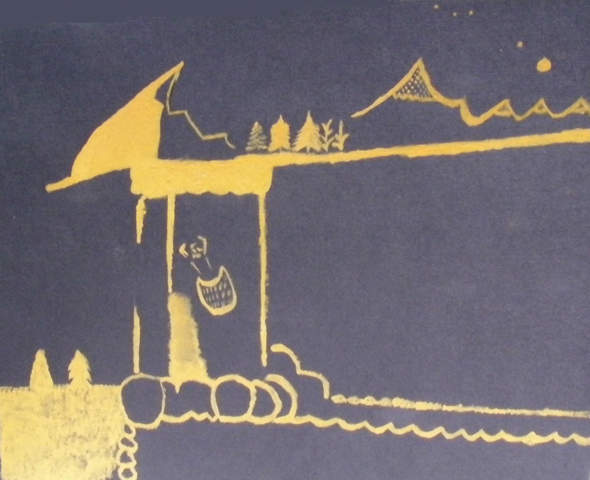 The dogs struggle initially, kicking sand into my face with little productivity, but soon they pull together and the sleigh picks up speed. In no time I am being transported across the granular terrain at about twenty kilometers per hour. Here I am, a 38-year-old anthropologist exploring the Big Bend Area of West Texas, isolating myself in the desert with hopes of coming across a new clan of homo sapiens rumored to be living at the foot of the Chisos Mountains; my step cousin would be proud. She is a simple minded fan of sandboxes, sand castles and digging. There is no doubt that she would be impressed by all the sand I have found here.

The sleigh was a last minute addition to the trip. Initially I outfitted a jeep with special tires and special headlights but was informed by an old local man living at the edge of the desert that, like snow, sand was best traveled by dog sleigh. Attracted by the idea of an insider’s tip, I left the Jeep with the wise veteran and rented a five dog sleigh he happened to have available for $300. “Remember what I told you,” he said as I left.

Now, well under the intense Texan sun, I rummage through my bag looking for a pair of sun glasses to shield my eyes. Digging past my required reading for the trip, Bill Bryson’s Take Your Travel to the Next Level: A Detailed Account of my Journey to Space, digging past my mix tape of various Jon Bon Jovi classics, underneath my deodorant, matches and mirror, on top of my tweezers and toothbrush, I find my sunglasses.

With a new outlook I study my team of dogs. There are five of them attached with make-shift reins that lead to my hands. The lead dog is an oversized and underfit Deutscher Schäferhund, a dog with hair far too thick for this heat. Behind him on the left are two Texas Heelers and on the right one Greyhound followed by a miniature Dachshund. I can tell the Dachshund is having particular trouble trailing the big Greyhound, but decide the sleigh needs every inch of dog leg working for it.

After an hour the team and I have successfully entered no man’s land. However, after 60 minutes at a large dog’s pace the littlest member begins to struggle; coughing and choking on sand. “Pull it together!” I encourage the wiener dog, “dig deep!”

After 63 minutes of jogging the hot desert sand, my rented Dachshund stops moving her legs. In an act of dead-woodedness she closes her eyes, curls her paws up toward her chest and rides suspended by the reins between the greyhound and my sleigh.

With the team abruptly halted, I jump off the sleigh and rush to the German Shepherd’s aid. His coat is unreasonably hot and he lies crumpled without a pulse. Three remaining dogs of good health look at me for direction. I decide that the last thing I need is for these beasts to get hungry and turn on me. Without a second thought I free both Heelers and the Greyhound. I check for vital signs on the Dachshund and find a weak pulse. In an effort of nourishment I pour water into her mouth while watching my more useful rental dogs disappear into the distance, heading back toward home.

“Well Deadwood, what shall we do now?” I ask the small pile of dog now lying in the sand. Struggling to open her eyes, she coughs muddy saliva onto my shoe.

I unleash Deadwood, pick her up with one arm and sling my bag onto my back. Perhaps the old local at the edge of the desert will come looking for us when he finds the heelers and greyhound on his doorstep. I figure that’s our only chance of survival. According to my calculations, the dogs were traveling at about 20 kilometers an hour for a little over an hour. Therefore Deady and I must be a little over 20 kilometers into the desert.

The utter helplessness of our situation reminds me of the time I watched my friends get a beat-down when I was twelve years old. We were three cracker-jacks, real powder-asses, growing up in a primarily black community at the height of underground hip-hop. It was my best friend Fredrick who we dubbed “Fro”, myself who was known as “Mo”, and Timothy who was nick named “Two” after his new favorite rap artist Tupac Shakur. The three of us were working on our hoop skills, playing a game of hula-hoop ’till you drop. “Fro” was the defending champion and “Two” was giving him a real run for his money. It was then and there, August 21st 1991 under that warm inner city sun that it happened. I had run inside to grab my three older sisters’ newly obtained grass skirts from some beach-themed store. I thought it’d be a real laugh to suggest wearing grass skirts to the guys. So here I am running out of the house wearing one grass skirt, carrying two more and what do I see on the side walk? A few thugs shaking Two and Fro.

I stopped on my front lawn beside a small cedar tree and some bushes. Immediately I recognized one of the thugs as “J-Mall”. He was a real tough fella who liked to call me “chicklit” because of my love for Nancy Drew literature. I didn’t want J-Mall seeing me in my older sisters’ Hawaiian grass skirts but I knew that was exactly what needed to happen if I were to avoid being beaten. In a flash I threw a second grass skirt over my head and pulled it mid-way down my chest. The third skirt I wore like a halo. Fully cloaked and covered with long strands of dead brown grass, I watched my white hombres get their faces punched. J-Mall looked over only once but dismissed me and my disguise for some rotting plant-life. Perhaps that’s all I really was.

After a few minutes of punch-infested-fun, the fellas left my boys alone. They cracked and warped our hoops. Fro hurt his elbow and Two had lost a shoe. J-Mall was sending me a message. Even in the inner city heat, he kept beat. No matter what time or what mode, J-Mall would rhyme, it was his code. 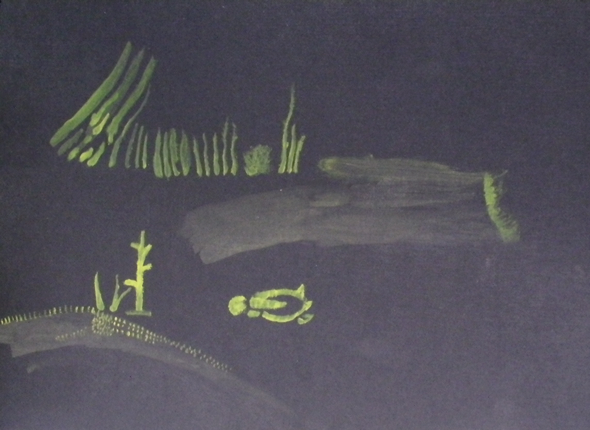 Now alone in the desert with old Deady under my arm, I felt as helpless as a Hawiian skirt wearing boy.
“Damn Deady,” I dropped to my knees and threw one fist in the sky, “damn it all to hell.” I whispered the phrase to avoid any sand gathering in my mouth. There was no way I was going to end up with muddy saliva any sooner than I had to.

I remained on my knees until the hot sand on my skin made me feel uncomfortable. I stood up and continued walking; it was too early to give up. I should at least try to run myself into exhaustion. Then an idea came over me, a dog with exhaustion. That’s how I would get out of this mess! I looked over my shoulder to see the German Shepherd being picked over by some vultures. Poor thing. Then I saw it, just on the horizon, the Greyhound! It was my only way out, I began running, holding old Deadwood like a football in one arm. I ran for my life. I could see it turn and come for me now, I began to worry. What if the black pawed beast was in a state of desert delusion? It could run right over me. My God. But run it did and run I did until we both met and slammed on our brakes. The greyhound doors swung open and I hoped on, narrowly escaping the cloud of blackish exhaust that inertia brought toward the outer front of the bus.

“No ticket”, I said between breathes, “I only have cash.”

“Cash is fine sonny,” he replied.

“Would the cash be fine shady as well? This particular twenty, I won in a game of poker with friends.”

“Sure why not, there ain’t much sonny money in the dessert anyway.”

“I’ll take the twenty for a one way,” the driver replied.

I threw him my dimly lit dollars, found a seat across the aisle from a young Asian fellow and closed my eyes. I couldn’t keep my eyes closed for long as I was still breathing heavy and thinking quickly. I looked down at Deadwood and she looked up at me with some jubilation.

“My name is Heh Ming Wey,” he replied, “but people call me Ernie.”

“Nice to meet you Ernie, where are you off to?”

I grunt a response meaning something along the lines of “oh I see,” and avoid making further conversation with Ernie. I am more interested in the female sitting a row ahead of him. She is beautiful. I had eyed her up the moment I stepped on the bus a few moments ago. From my vantage point, it is certain that a quarter of her or perhaps even her entire right half is beautiful. She is wearing at least half a tank top, and half a pair of shorts, both of which reveal soft and supple limbs. I can quickly tell that she’s the one for me. Without wasting anytime I pull out my notepad and scribble her a poem:

‘Cacti are green, desert sand is yellow
Boy oh boy, you make me feel like quite the fellow. ‘

I scrawl my details underneath the poem: ‘Moe Francis, 6 foot 2 inches tall, 162lbs, Capricorn, fancymoefrancis@anthropologistsmail.com.’ I anxiously await my opportunity.

After 34 minutes the bus stops at an undisclosed station near the edge of the desert. I’m uncertain as to where my jeep is in relation to this bus station but that doesn’t matter now.

The woman of my dreams throws a small pack over her shoulder as I gather up Deady and my own bag. Ernie exits ahead of me I can’t help but step on the backs of his shoes as I follow him off the bus. Once in the sand bitten air, the crowd scatters across the platform in many directions. I look around desperately trying to find my soul mate. Being neither to my left nor to my right, I’m able to locate her straight ahead of me. She’s hunched over a garbage can vomiting a few meters away. It’s rather off putting. I look at Deadwood, and then at the ground. I crumple up my poem and throw it in a garbage can to my right.

I set Deadwood down and ask her to sniff out Ernie.