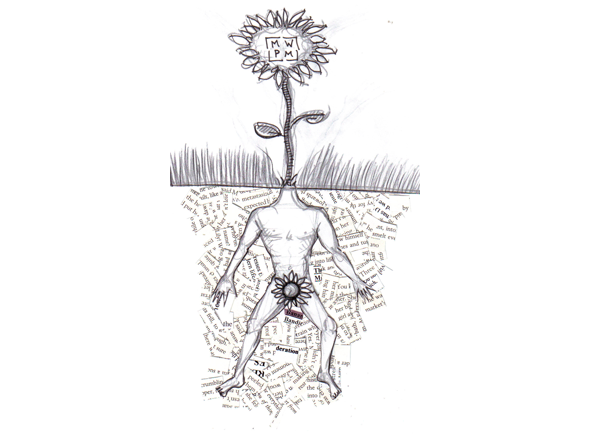 Blueprint Correspondent here! I was afforded the rare opportunity to interview the prolific writer Arthur Rousseau, who is best known for his memoirs (remarkable, considering the market is oversaturated with memoirs) and non-fiction.

Here is an excerpt from the interview, which I have noted for Rousseau’s frequent use of the word ‘root’ (perhaps a strategy to promote his latest memoir, “Killing the Tree at the Roots”—available June).

BC: You have been compared by some critics to a poet, while others call your prose “confused in their inconstant lyrics”.
AR: Critics are useless, worth less than the paper they waste.
BC: One critic questioned English as your first language.
AR: My work doesn’t translate well into English.
BC: What language do you write it in?
AR: English.
BC: What are you translating?
AR: The idea is rooted in the mind. It must be translated to the pen, of course.
BC:I was going to say… I thought you spent your life in the Canadian countryside, speaking English and maybe German…
AR: I have no German roots. My parents abhorred the Germans after the war.
(…)
AR: I tried to write fiction, but people thought it insulting to be called ugly. Humanity is ugly, but I had to take another route if I wanted to get published. The memoir is assumed truth.
BC: The memoir is truth, perhaps the best truth, isn’t it?
AR: In fact, the memoir is a lie. Fiction is rooted in truth, with the exception of popular writers, who clot the arteries of their readers.
BC: Are you suggesting that health problems are caused by reading Stephen King, Patricia Cornwell, Dan Brown, Ian Rankin, Nora Roberts, Mitch Albom, Clive Cussler, and Stephanie Meyer?
AR: They are, undoubtedly, the root of the problem.
(…)
(Rousseau is looking at my notes, which I carelessly dropped on the table.)
AR: When I spoke, I put a period right there.
BC: Oh, I thought it was a semi-colon…
AR: I hate semi-colons! How dare you put semi-colons in my mouth!
BC: I’m sorry! It won’t happen again!
AR: Kurt Vonnegut, the writer, said, “All they do is show you’ve been to college.” I believe that is true. It is a hideous invention, the semi-colon. The root of all evil.
(…)
BC: Final question – What do you consider the biggest difference between North America and Europe?
AR: I have no roots in America, only the natives do. And I don’t get asked mundane questions—like yours—in Europe.

That was embarrassing! Guess I should have left that last part out. It was otherwise a pleasant interview with Arthur Rousseau. That’s all from your Blueprint Correspondent. Keep reading!