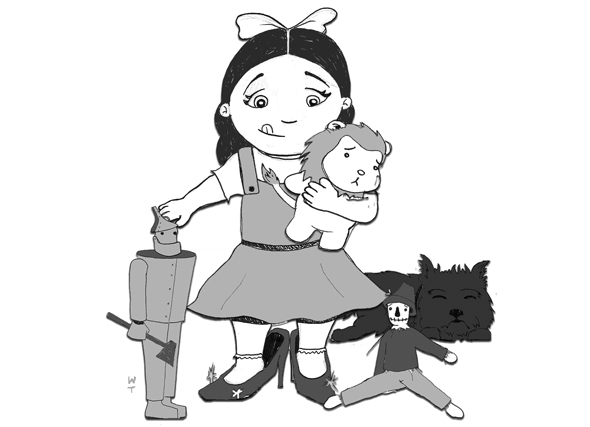 It was nothing short of magic when Dorothy, with just the click of her ruby slippers, returned home from Oz. Over half a century later, we may not have the technology for teleportation, but with one click of a button we can send emails, pictures and even talk to our loved ones at home face-to-face via Skype.

Maybe, if Dorothy were able to Blackberry Message Auntie Em a picture of the Emerald City or tweet about the Wicked Witch, her desire for home would have been slightly diminished. After all, wasn’t that the moral of her story, that home isn’t a physical place, but an emotional one? I can’t say for certain how modern technology would have impacted the past, but one thing is for certain – The Wizard of Oz would have been much less inspiring if Dorothy had whipped out a GPS to locate the nearest airport and caught the first plane out.

On my first vacation to Europe, I suffered extreme homesickness and longed, every night, to be sleeping in my own bed. Within a few days, I realized how easy it was to feel comfortable in a new location. Surrounded by the comforts of my family, I could turn each hotel room into my own space with familiar belongings. I realized that a home is nothing more than a building; it takes the memories and personal experiences to transform four cold walls into a space of nostalgia and comfort.

One of the great things about travelling is that eventually, you return to your own bed and are reunited with your real home. My home is where I felt most the most comfortable in the world, cuddled on my couch on a Saturday afternoon. So naturally, I found it quite challenging when at 14 years old I was forced to move away from my childhood home and relocate to another city.

I was stuck in an unfamiliar space everyday without the promise of one day sleeping in my old room again. I coped by browsing through photographs of my old home, and tried to keep in touch with my friends using MSN Messenger. It didn’t take long to realize that the photographs were one dimensional; even with a picture of my backyard in hand, I still couldn’t run around it with my neighbourhood friends or pick berries from the garden. I couldn’t smell the musty scent of the attic or accidently step on the creaky stair when I snuck downstairs at night. The photographs were just fragments of a memory; if anything, they served as a cruel reminder of a time we can never go back to.

Like how I created a quaint nest in the many hotel rooms I’d visited, I was eventually able to turn those strange new walls into recognizable ones. I started to learn the smells and sounds that came with the house, and tried my best to visualize how my room would look and feel down the road. While I adjusted to the space, I could never quite become accustomed to the loss of my childhood friends. It never seemed to matter how many hours were spent hashing out gossip on MSN, the conversation always had to end with an abrupt ‘g2g.’ Over the next few months, the conversations became less profound and much shorter. As these were pre-social networking days, keeping in touch with somebody took a far greater effort than a wall post every six months.

Even with the steady technological advances that were occurring, people seemed to blindly accept that emails and occasional chatting could suffice as replacement for face-to-face interaction. The promise of having my friends come to visit me in my new home was forgotten. I suppose they thought, ‘why visit when I could email.’ Even later, with the opportunity of Facebook, catching up consisted of a ‘we should do something sometime’ half-sincere message.

The ironies of modern day technology are inescapable. I choose to believe that internet companies began their endeavours with the best of intentions, to bring people closer together. Facebook was a way to stay in touch and connect. Skype created a way to see our friends and family face-to-face when we are half way around the world. These are very extraordinary inventions and accomplishments, and if you isolate them from society, they seem like the absolute ideal.

Sadly, these technologies, invented to bring people closer together, end up driving them further apart. If I can write emails, Skype and text every day, there is never really a need to see someone in person. Similarly, it becomes easier to replace a physical person with their online persona. Eventually, after communicating using only these media for a significant amount of time, it becomes much more manageable to rarely see somebody, and the desire to see them gradually fades.

Even after the despair I felt in moving away from my childhood home, over time, the blue walls of my bedroom melted into the purple walls of my new one, creating a hazy nostalgia for a place I struggle to remember. This is the unfortunate divide between technological intention and implications. If I communicate with my sister through text and Facebook chat when she is in the very next room, how will we connect when we live in separate houses, cities or countries?

Vast changes in basic technology made travelling to Europe for the second time a more convenient experience. I could take a computer with me, which meant I could keep in touch with everybody at home. It meant I could upload pictures as I went about my adventures, sharing them with friends and family. It even meant I could listen to the music I wanted with an iPod.

Despite the possibilities these devices provided, I longed to experience travel the way I did on my first endeavour. Strolling along the Seine is less romantic with a Blackberry in hand. I felt like I was living my days according to my email, thinking of all the people I needed to respond to and promised to communicate with. I was living for my camera, for all the pictures I said I’d take and all the while being consciously aware these could be seen by anybody on my networking sites. Even an ocean away, technology was guiding me with its invisible hand, influencing my decisions and behaviour.

Even though I was thousands of miles away from home; I was only an eight hour plane ride away. Even though I’d like to believe I was finally somewhere untouchable, I was still reachable; I was still subject to the culture and technology of my own continent. The Simpsons was on television, a Starbucks was around every corner and there is nothing quite so depressing as purchasing a souvenir from the streets of Paris and seeing it months later in a Home Sense. I’d pulled back the curtain and seen that behind the great and powerful Oz; there was nothing more than a man and a machine, controlling my thoughts, actions and ideas.

The world seems like a smaller place, controlled by a handful of people, websites and technologies. I can buy a Kit Kat in every country and share my stories on Facebook no matter where I reside or where I travel to. It’s opened up possibilities to keep in touch with the people I love, but these devices aren’t restricted to travel and distance. They impact the ways I interact with the people in my very own city, and home.

I wonder if I would live life differently had these technologies been unavailable to me as they were to Dorothy. Would I see friends more often, and would travel be a much grander experience? Globalization wouldn’t control half the world and relationships and cultures could flourish. I would be less insecure about how I’m being perceived and feel more inclined to keep friendships intact.

And somehow, regardless of what I long for, these are only the dreams I have; dreams for a world without technology consuming my every moment. I have the brains to learn and communicate without these devices; I have a heart, and love for my family. It would seem all I’m missing is a little courage to power down my laptop, leave my cell phone at home and learn to live life on my terms; knowing that though memories of vacations, family and even my childhood may fade, they can never be disconnected.