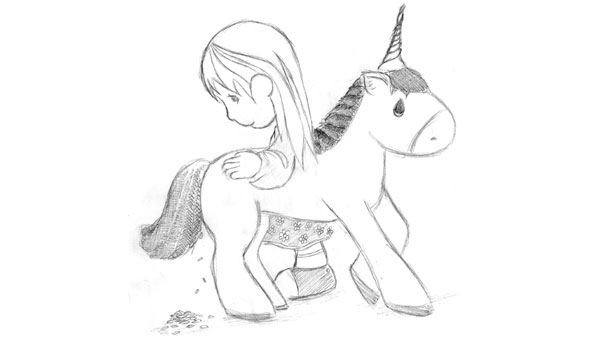 Miss Hilda Grimbley entered her commode at 9 o’clock on a serene Saturday morning in the early part of the twenty-first century and sat down on her toilet as if it really were, as the colloquialism goes, a throne.

She was not a handsome woman, but she prided herself on being a lady; and that appellation, with its accompanying net of connotations, guided her every movement. And so, her knees modestly pressed together, her skirt covering much of her lap and her cotton drawers pooled on the powder pink linoleum around her sturdy but comely ankle boots, Hilda was at ease regarding the worn but still-pretty hand towels on which she had embroidered delicate seahorses with gold embroidery floss.

She was at ease, that is, until she broke wind, A mouse-like “oops!” escaped her lips as she clenched the gabardine of her skirt in her mortified fists, followed by an “excuse me!” She was, of course, addressing no one. Naturally, there was no other soul but her own in the lavatory. Hilda Grimbley lived, in fact, entirely alone. She had done so since she graduated from Smiles for Christ Bible College, moved out of her parent’s bungalow and into the conveniently located apartment above Celebration, a religious gift shop where she had since been employed. Nevertheless, she had been bred by a woman of the 1950s through and through, and the “excuse me!” rose in her throat more instinctively than her completely unresponsive knee-jerk reflex – a condition that doctors had recorded as “inexplicable”.

Hilda had almost entirely subjugated or made acceptable her every bodily function, so this lapse of control disturbed her deeply. She was incidentally, menstruating on this day, a burden that she sought to mask with the old-fashioned menstrual belts she had to special-order that came in pretty packaging and had a powdery-fresh scent. She had never before experienced what she had heard some immodest women speak of as “P.M.S.”, but perhaps this slip of propriety had been a result of that disorder. When others chose to speak to Hilda about crude subjects such as these she would deflect their attempts by baring her long teeth in an approximation of a smile, batting her thin, light brown eye-lashes, and sort of jiggling her weird hair-do.

Hilda sat, recovering her composure, and trying to convince herself that there was no possibility that her neighbours down the hall, nor a passer-by in the street below could have heard her, when a brassy jangling clamour ripped through the small room. It rang in her ears, it echoed boisterously off of the blush-pink walls, and her thoughts were drowned in a metallic din. This noise, much like that of a slot machine spewing its significant spoil into its tin receptacle after hitting the jackpot, but without the blinking lights and circus music, was being emitted, to Hilda’s abject horror, from below her.

In a primordial, fight-or-flight panic, Hilda spread her legs and looked down. She would have immediately stood and ran from her home at the shock of what she now saw, if she weren’t presently spewing a massive quantity of metal pieces from her vagina.

“Clangalangachinkchinkitychinkityclangjanglyclangachinka! Etc!” screeched through the small room as the metal hit the clean porcelain bowl, continuing their flow for what seemed like half an hour, as Hilda sat paralysed with fear and disbelief. Amazingly, her distress did not encompass physical discomfort – the coins slipped out of her birth canal painlessly.

In this shocking state, Hilda’s flabby neck, no longer able to support its charge, folded her small head towards her chest. From this viewpoint, her watery eyes peered downward, and she spied something shiny laying on the bed of her feminine napkin. Focusing her eyes, she perceived what glinted there to be two coins: one Canadian dollar and two-dollar coin each, newly minted and slick with her own fluids.

As she attempted to comprehend the meaning behind this sight, the gushing stream slowly jangled to a stop. Gathering her considerable resources, she carefully wiped her feminine area clean. Then, touching her vulva directly for the first time in a very, very, long time, and finding it unchanged by its supernatural expulsion, Hilda stood, raised her underpants and left the room; notably forgetting to wash her hands.

In a daze, she lumbered towards her bedroom and sat on the nearest edge of her bedspread. She stared at the bedroom wall, with her time-worn, beige-flowered wallpaper, taking nothing in. She was not yet processing what had happened to her on the toilet. Hilda was rather accustomed to strange, inexplicable things happening to her body. The day that she was visited by her first menstrual period her mother told her that she had probably just eaten too many beets – still her favourite root vegetable. Hilda had done just enough research on her own to discover the unusual mail-order company that still produced her old-fashioned sanitary napkins and that was all she had needed to know.

She had never told her mother or father that although the hair on her head was thin and brown, her pubic hair had grown thick and golden – not blonde – but as golden as if Rumpelstiltskin had spun it. Her family did not welcome the sharing of personal feelings, private matters or aesthetic pleasures. Much of their contact consisted of sitting silently around the dinner table after a needlessly strenuous workday, as if the toil of their ancestors was genetically demanded of them, even as those around them accomplished as much playing solitaire or text messaging their girlfriends behind their desks. The sounds of the Grimbley bones creaking into a state of rest and the Grimbley teeth mashing food made conversation unnecessary to fill the silence.

Much of Mr and Mrs Grimbley’s sparing conversation revolved around how decadently nonsensical the “kids” of today were, often while reading an account of a protest in the local paper, or seeing a segment on the evening news about an art exhibit. Little Hilda did not want to be a fool in her parents eyes, and so she had omitted to tell them that she had seen a unicorn behind a clump of yew trees while plucking potato bugs off of her mother’s cabbage plant. Also left unspoken was the shuddering orgasm – her first and last – that she had experienced that night when she was barely a teenager, thinking of her impossible vision.

She did, however, draw up the courage to ask her mother to buy her a “Precious Moments” figurine for her bedroom. It was an adorable ceramic unicorn statuette that had like all “Precious Moments” figures, oversized, sad eyes that suggested both innocence and shame. She had seen it in a Christmas catalogue and had felt a desire for it so powerful that she truly feared for her life if she couldn’t have it. Her mother called Hilda a “flibbertygibbit” and hadn’t even broached the matter with her father. Hilda wept hot tears in her bedroom that long night but by the next month she had convinced herself that only children coveted doo-dahs like that unicorn, while mature young women wanted sensible things like bus passes and Epsom salts. It was also around this time that she convinced herself that what she had seen in her backyard was probably just a figment of her imagination.

Hilda had never mentioned any of these fantastical events to anyone. Nor did she even think of them privately. She did not allow herself to indulge in these remembrances because, if brought to the forefront of her consciousness, moments so enchanting would be unavoidably spilling over her lips and into the ear drums of her parents, her pastor, and the thin gentleman Duane that managed the gift shop. This couldn’t be. These were her private moments.

This latest experience, though, brought old memories gushing into her mind. Each on its own could be explained away by a genetic fluke, a trick of the eye, or a psychotic hallucination. But the ancient spell of the number three convinced her of what she had always suspected. Hilda shrugged her scrawny shoulders and accepted that she had been Chosen. God had provided, and she would now get what she wanted. She opened the top drawer of her bureau, retrieved a nylon trouser sock, and returned to the washroom.

Half an hour later Hilda was waiting in line at Horace’s Drug Store. She had just had an irritable clerk unlock the showcase where they displayed the high-ticket items and remove the most beautiful little man Hilda thought she had ever seen. He was a little Aryan boy in a pastel blue suit, holding a sadly wilted bouquet of daisies, shyly hiding behind his friend, the equally bashful cream-coloured unicorn, on a grassy mound. The statuette was made of bisque porcelain, carefully painted with pastels then glazed and fired to a dreamy matte finish. Both figures had the adorably homunculean eye-to-face ratio that was the trademark of all “Precious Moments” pieces. The little man stood only five inches tall and the tag on it read $69.99. Hilda shivered with the pleasure of knowing that it would soon have a new home on her bedside table, and that she had acquired it with her own money. With tear-dimmed vision she read the little inscription in pink curlicue script at the base of the figure: “God Sent Special Things Our Way”.

With a heavy bulge in the left pocket of her navy overcoat, Hilda walked the little figure up to the checkout as if she were approaching an altar to receive communion. A young woman with an undercut hairstyle, standing behind the counter appraised Hilda from beneath raised eyebrows and then rang the prized item through – “seventynineeight”. Hilda emptied her sock of coins onto the counter with relish. The sales girl rolled her eyes, “You have got to be kidding me, lady…all change?!” She clicked her tongue and started counting.