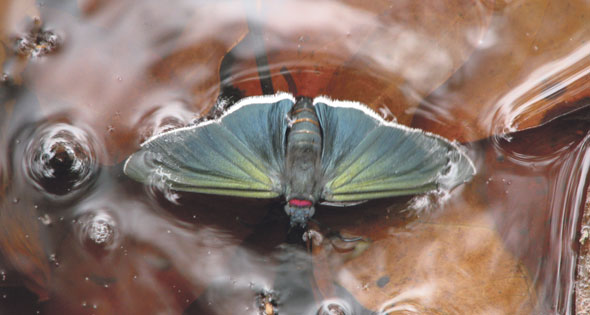 One – Polar bears.
Two – What?
One- Polar bears.
Two – What about them?
One – They’re going extinct. They’re drowning because the ice flows are too far apart now.
Two – So what?
One – Global warming, man, global warming.
Two – I don’t give a shit about global warming. In fact, I wish it was warmer already. Do you know how cold it is out there?
One – Well okay. Fine. Ha-ha. It’s cold outside, so we want it to warm up. Very cute. But seriously. . . global warming.
Two – What about it?
One – It’s scary as hell.
Two – Why?
One – Species are going extinct. The oceans are heating at an alarming rate. It’s going to cause dramatic climate change, and
Two – Hold on.
One – What?
Two – Why do I care about this stuff? I’ve never seen a polar bear in my life. Species in the Amazon go extinct every day, many of them never even discovered yet. If they’ve never been discovered, why would I possibly care?
One – You don’t care about the diversity of nature? The ecosystem.
Two – I can honestly say that I don’t believe those things will ever affect me in any way.
One – But aren’t those things valuable for their own sake?
Two – Are they?
One – Aren’t they?
Two – I’m not exactly sure.
(Pause)
One – What about climate change? Do you not care about that?
Two – Where do we live?
One – Canada.
Two – Tell me how climate change is bad for us.
One – Are you crazy?
Two – Tell me how climate change is bad for us.
One – It creates unpredictable weather patterns. An increase in natural disasters. Disruption of natural growing seasons. Worldwide weather problems.
Two – Really?
One – Yes.
Two – What if I don’t believe you? What evidence do you have for me?
(Pause)
One – Polar bears!