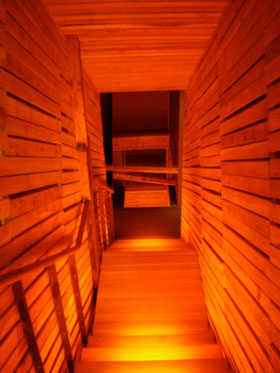 Contrary to popular belief, or my countless “I hate retail” rants, I like people. Really. I’m a social person, I love friendships and I’m an extrovert to the point of having been kicked out of class all through high school for talking too much or making inappropriate comments. That, in all fairness, were relatively funny – just not appreciated during Canadian law class.

But so help me God, I hate forced social situations.

I hate them more than anything. Well, that’s a lie – I hate bad drivers, sudden loud noises, and repeating myself, but I needed to get your attention with that first sentence. I hate making small talk, I hate engaging former frenemies and above all, I hate feigning enthusiasm for “team spirit” and things of the sort.

Once, I hosted a high school pep rally. I did it only for the opportunity to make everyone laugh (because, really, when it comes to high school pep rallies, there’s a lot to make fun of) and because I couldn’t miss an opportunity to wear my brand new Gap sweater in front of the entire school population. It was a different time, and I was 18, what can I say?
But when thrown into things like school orientations and O-week celebrations, I’m more uncomfortable than someone…well, forced into school orientations and O-week celebrations. I’ve never liked cheering, I’ve never liked teams, probably because I was always cut from them during try-outs in elementary school, and I’ve never liked “collective” mindsets. Cue flashbacks of me feeling really out of place throughout the majority of grades nine through twelve.

Weddings – great. Birthdays – aces. Networking events – I can dig them. But “go team so-and-so” and “these are your friends – now go party with them”? I can’t handle it. Likely because the kids basking in collective enthusiasm were always the ones who left me out the most.

Now before you roll your eyes and assume I’m about to wax poetic about the misdoings of teenagers, I promise I’m over it, except that I still rely on some of my resentment to fuel goal achieving and to tell funny stories. But it always felt that the events designed to make you feel more included were the ones that left you out the most. What if I don’t want to paint my face and scream about football? What if I have no desire whatsoever to segregate into colours and partake in dance-offs? Maybe I want to go to a movie, see a great band or sip coffee on a patio. Why am I automatically excluded?

Because orientations – like nearly every “rah rah rah” event – are designed only for a specific demographic. It’s true – look around. I’m not being a snob. And that demographic isn’t bad or less cool than the rest of us who avoid these situations like the plague (seriously – I’ll walk on the hawk if I want, and if you yell at me because of it, I’ll break your spirit). They’re just “the norm”. And the people who feel much more “included” at indie shows, diners and things of the sort are not. And that’s okay. Because without differences, university would just be a melting pot of the sameness – which it isn’t.

But don’t let orientations make you think you should act, think or be a certain way – because if you’ve witnessed anything cheer-oriented, you’ll instantly feel like it’s a how-to manual for university behaviour, and it isn’t. You’re allowed to not like it, you’re allowed to be cynical and you’re allowed to stand on the peripheries with a pal making fun of everyone Daria-style.

Because at the very least, terrible social situations aside, you will find an equally embarrassed counterpart who detests forced camaraderie as much as you. So I guess technically “they” win – because you did meet a lifelong friend after all.