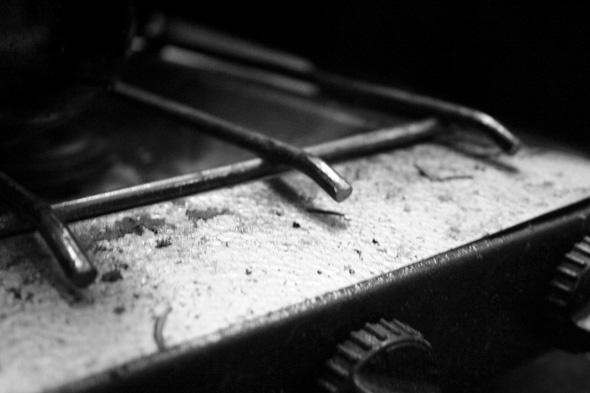 On a damp December afternoon, Grandma and I were coming to the completion of a mission: Operation Onions. There was no greater fun to be had, as it never really snowed in Vancouver and there is no such thing as a rain angel. That evening’s meatloaf called for two large cooking onions, of which there was a full sack squatting by the chest freezer in the basement.

Always at the ready and infinitely versatile, this hearty bulb was my Grandma’s rooted twin. I gripped one onion tightly between my eight year-old hands to make sure that I would not drop my precious loot. As we made our way upstairs, I stayed on the tails of Grandma’s talcum breezes. I kept my distance close enough so that my nose could almost skim the backs of her navy wool trousers.

“Now you will go back in the front room and ask your Auntie Linda to go over that Third Sonata with you one more time,” my grandmother instructed me as we ascended the final two steps.

Auntie Linda had received her doctorates in Music Theology and was a professor at an obscure Evangelical college in Missouri. Her authority was diminished in my mind. I couldn’t understand how she could claim she was a doctor when her only patients were first-year students who blushed at the mention of a pianist.

My eyelids pulled together like lips at the spray of a fresh lemon wedge, though as a young thing I only knew of such tartness from reading aloud the explanatory notes in The Joy of Cooking. Grandma refused to buy citrus because it was “frivolity for the bourgeois”. The light bulbs sitting in the kitchen ceiling fixtures, covered in a film of bacon grease and flakes of dead skin, afforded the room a degree of light unknown to the depths of the basement. If it hadn’t been for our regular trips to the bowels of that old house, I’d have just as soon forgotten that the upstairs rooms were wired with electricity.

The day before we had gone to Safeway to pick up a pack of toilet paper rolls, which was a rare purchase. We were only allowed to use two squares per pee, three for a number two. Grandma policed this policy with great fervour. There was a Santa Claus sitting in the produce section and when it was my turn to pop up on his knee, I asked him for an oil lamp. I wanted to win Grandma’s approval by showing her that I was a levelheaded lady.

On nights at Grandma’s house, I drifted off to the musty stables and dank root cellars of the Jeffry farm in Salmon Arm. After Grandma’s death, I unearthed her journal from 1934 from deep within a box marked as kitchen tools. Each Sunday she had written of the sinful pleasure of washing her hair, which I suppose was the only indulgence acceptable for farmer’s daughters.

Just as we were set to part ways – I going to the front room, Grandma headed to the chopping block to finish dinner – I was stopped in my tracks by a pair of tiny black dots, small and piercing through a thick barricade of bifocals. Grandma needed only to bend an inch or so forward to bring her face to meet mine, as we were almost equal in stature. Valna Jeffry had always stood at 5 feet 1 inch. Such delicacy had granted her a range of social mobility unknown to her fellow oxen sisters.

“By the time you leave to go back to Ontario, I will hear you playing that Sonata perfectly. Do you understand?”

There was a perfect stillness in her face as she waited for my answer. I could feel her exhale on my supple cheeks. Her breath was sweetened by the perfumes of age: eau d’old flesh, flavoured with a pinch of Polident. The permed wisps that sat atop her head vibrated slightly, creating a humming halo of grey encircling her age-spotted skull.

At Grandma’s memorial service last week I made an offering to our staunch matriarch, ever reigning silently from beyond the crypt. Before I lowered the box of her ashes – a small green tin no bigger than a box of biscuits – into the dank hole in the earth, I snatched the onion that was tucked in the inside pocket of my down vest. I quickly snuck the bulb into the hole and then placed Grandma on top of it. Like an Atlas who has won her pardon and now sits atop a small globe, its layers soon to be eaten through by grubs and earthworms.

May my fallen goddess rest in peace.