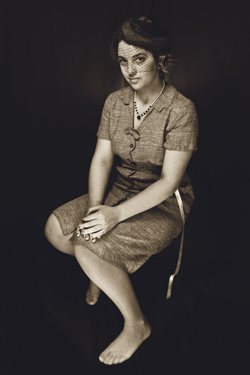 T.S. Eliot believed that in poetry and literature, the past is never abandoned, but that present motivations are always extensively modified by the past.

My life has been filled with strong, assertive women who would consistently strive to get the best out of life. My grandmother was one of them. To some, she is seen as intimidating and opinionated. To me, she was nothing less than genuine.

One of my earliest memories with my grandmother occurred when I was about four years old. My grandmother loved jewelry, a trait that she unfortunately passed on to me. We would sit in her living room, sorting through flyers and magazines, cutting and pasting images of rubies, sapphires, and diamonds onto pieces of construction paper. The end result was what we called a “gem book,” a book that depicted all the different types of gemstones. My mother never approved of my grandmother embedding this sense of luxury into my life; she was a more simplistic woman, who believed in investing only in the essentials. Her concern wasn’t misplaced – those books are likely the reason why I occasionally guiltlessly spend a whole paycheck on a shopping spree.

For the many years that I knew her, my grandmother lived alone. She divorced my grandfather long before I was born, and despite my curiosity, always refused to tell me why.

Fourteen years after I made my last gem book, during a visit to my grandmother, I left the room briefly to take a call from my high school boyfriend. My grandmother had a significant amount of contempt for him. Though he had admittedly screwed up a few times in the past, I rationalized that no one is perfect. I noticed the worried look on her face when I returned to the living room where she was seated.

I learned that my grandmother’s meeting with my grandfather was passionate, their engagement was quick, and the marriage was nothing but tiresome. Her marriage made her someone that she never intended to be; a shell of the wild, outgoing and independent woman she once was. Her divorce was more expensive than her teacher’s salary could handle, and left her almost destitute. If not for her strong support system, she never would have survived.

This would become the moment where I truly saw my grandmother for who she was. She was a woman who was willing to attempt to survive off nothing just to regain her independence.

Those hand-made books filled with images of sparkling gemstones weren’t just material goods – they’re a reminder that there is extravagance in everything in the world, which my grandmother found through her own re-discovered independence.

My grandmother was terrified that my future was destined to become her past. I promised her that I would never let anyone or anything take any part of me, and that I would fight as hard as I could to maintain my independence no matter the circumstances.

T.S. Eliot’s theory is realized through my grandmother. I see myself as a changed person due to one woman’s words. I understand that in order to seize the benefits of life I must become aware of my own potential, not only as a woman, but to shape my future existence.