During the summer I work in a factory, or rather, a plant, though there is nothing organic about it. I put parts on cars for 8 hours a night, 40 hours a week in the giant, disgusting, pulsating, social organ that is the General Motors Oshawa car assembly plant. 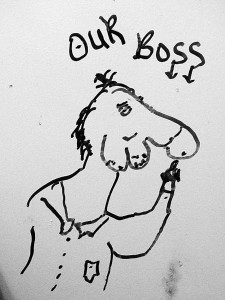 Please understand, I’m not complaining about my job. I make very good money and I know how lucky I am to be in there. It’s just hard to explain to someone who hasn’t worked there exactly what the place does to your mind. At GM. most jobs are 8 hours of menial repitition. You are trapped in the same 3×2 metre area with no one to talk to and nothing to do but think about the next 500 cars that will crawl past you, waiting for your part. The ergonomics and engineering in the place actually make you a prisoner in your own mind, making the job so easy that you don’t have to think about it, but to efficient that you just have enough time to do it so your mind can’t wander too far. The slow creep of the line actually haunts my dreams some nights, vague feelings and sensations drag past me while I try to experience them and figure out what they mean before they leave me alone and anxious in my little two metre box. 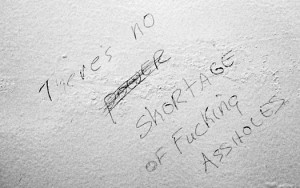 Under such circumstances, I’m left constantly looking for something to fill my mind with and distract me from my perpetually moving steel taskmaster, some kind of intellectual escape that I can think about to keep my brain from turning to mush. For a while, my iPod kept me half-sane until some scumbag rummaged through my backpack and stole it from me while I worked a double shift; I was sick of listening to all those CBC Radio 3 podcasts anyways. However, one day while sitting on the toilet and contemplating the pros and cons of lobotomy during one of my two ten-minute breaks, I chuckled at something written on the wall…and then it came to me. I would take pictures of the bathroom graffiti from stalls all around the plant. This gave me something to orient myself around other than building cars. Suddenly I had my own reason for being at work, something I cared about that I built up piece by piece as the summer went on. I had to be careful not to be seen on camera, obviously you run certain risks when you are snapping photos in the bathroom. It was worth it though – working the line is so deadening that the rush of doing something that I probably shouldn’t have been doing was a welcomed bit of vitality. I can only imagine what someone who is actually doing something perverted like taking pictures of poop must feel like. Their need for a summer project must far exceed mine.

After two months of scouting locations and stealthy shutterbuggery I have around 75 different shots of the social fourm that takes place on the bathroom walls in the Oshawa car plant. Pictured are a few of the not-so-obscene shots.