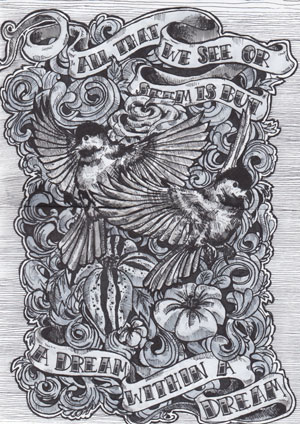 Too often, I find that people use nature as a scapegoat for failure and irresponsibility. At least, these are the ends nature may be cited for at best; at worst, nature is used to perpetuate the idea that we are inherently a depraved, craven, wretched, miserable lot whose marginal gains and successes are curious matters of happenstance, dwarfed by our monumental stupidity.

“I’m only human.” This is a phrase that many reading this article will undoubtedly be familiar with, and quite possibly have used to legitimize innumerable mistakes, missteps and misadventures; that great abdication of all responsibility that places fault on our tragically inherent inadequacies; that great surrender to the limitations of this pitiful and sordid vehicle of dust. I believe that this attitude is one that can be used to legitimize complacency and apathy. I also believe that this attitude is the rule rather than the exception.

The Canadian-based group, People for Good, challenges us to defy this very notion. In one of their televised public service announcements, a pregnant woman is standing in a full subway car. A man gives up his seat for this woman, and in order to accentuate the gravity of this seemingly innocuous act these two actors dramatize it by yelling at each other, catching the attention of those around them. The announcement ends with the words “If good deeds were more common, they wouldn’t stand out so much”. I do not believe that the goals of this group are futile, although I’m not so convinced of this as to believe the contrary an untenable position.

I’m not going to act like I agree with the whole of this group’s message. I don’t. Its simplicity and lack of definition verge on naivety. What I applaud is the underlying assumption of this group’s effort. It’s depressingly simple. In order for this group to proceed trying to change people, they must assume that people have a capacity for change. The message behind this group isn’t underscored by the belief that ‘we are only human’; it’s steeped in the belief that although things appear dreadful, we have the capacity to strive for something better. It’s idealistic.

This bleak and belittling perspective of humanity is not only something we internalize: It’s something we loathe in those around us with whom we – for reasons we cannot quite understand – share a species. Recently I’ve had the pleasure of attending a performance of Misanthrope by French playwright Molière in Stratford. Alceste, the protagonist, is a man of highly developed moral character who bemoans the hypocrisy and depravity of French society. The play’s eponymous misanthrope, Alceste believes that the only surefire solution to his plight is to isolate himself from all humanity. This all-or-nothing attitude is one I’m sure many of us espouse; if not constantly, then at least when our capacity for sympathy and solidarity diminish in the face of one or another unsavory attitude or action of our fellow Homo Sapiens.

This attitude that humanity’s nature is one of depravity and misery, while entirely tenable hinders any hope – no matter how unlikely – that we could transcend these shortcomings. Whether or not this attitude is made manifest internally or is used to condemn other people, it has no place in a personal or societal perspective that wishes to progress. The belief that we are inherently wretched, miserable, and stupid is a veiled surrender to complacency and mediocrity.