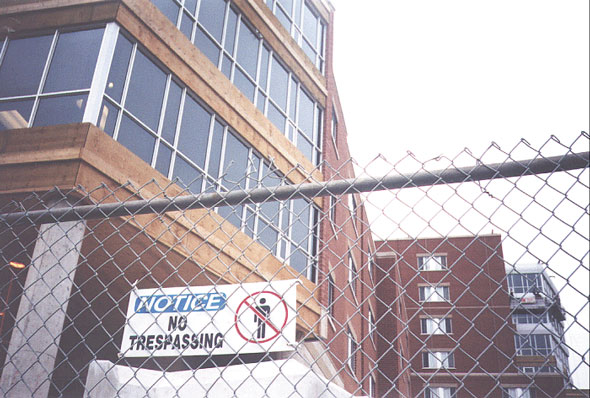 Am I paying tuition to hear my professors or to hear the banging-away of construction workers? Apparently they’re packaged together like extended cable, so even though all you want is Teletoon you have to take the Discovery Channel with it. My professors are forced to compete with the noise, but sadly they’re no match against all the fancy drilling machines in capturing my butterfly-like attention span.

It’s understandable that the construction is obligated to go on until the unfinished masterpiece I call home is completed. But, I often find myself pondering a simple question: why must the loudest construction take place early in the morning? It’s infuriating that the noise eventually does abate, but only after prematurely rousing us from our listless slumbers on uncomfortable mattresses.

The dust that’s a by-product of the construction can’t be good for us, either. It floats around, creating the illusion of a gentle snowstorm, complete with fluffy banks in every room. Perhaps I should start collecting it. After a few days I’d have enough to stuff a new mattress that would assuredly be more comfortable than the one I’ve been given.
The added inconvenience is coupled with added expense, since my residence is one of the most expensive! Here’s an idea: why not have us pay residence fees proportionate to the percentage of the building actually completed? I could sure use that 50% discount. And when the lounges, first floor, and parking lot are actually finished, I’d be less likely to grumble about paying fees that assume the inclusion of their services.

The construction and its side effects aren’t limited just to this school and I don’t wish to mislead you.

Construction is taking place all across Ontario, although the magnitude of the construction does vary quite substantially from school to school. At Western, students are forced to look at ugly unfinished gardens. Ryerson students have to contend with a coffee truck that interrupts their lectures with its honking horn, informing construction workers that grub is available.

The severity of the inconvenience may vary, but the unfairness of it is constant. University students pay noteworthy fees in their pursuit of an education. They should be treated with the same courtesy a professional would demand. Would a lawyer accept a leaky roof at a restaurant even if the food were exquisite? Assuredly not. These are the types of professionals we’ll eventually graduate to become; why not treat us as such? We’ll return the favour when we start pulling in six-figure-incomes.