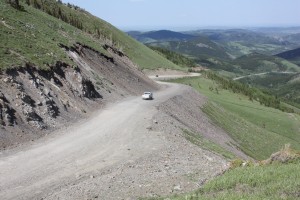 I stepped into the car, shut the door, and stuck the keys into the ignition. I turned to Kerouac, who sat in the front seat beating his khaki knees with his palms and bobbing his head, and said, “You’ve got everything you need?”

Kerouac didn’t respond. I glanced in the rear-view mirror at Shakespeare, who sat in the back. The top of his velvet cape draped over his shoulders and crawled down his silk shirt. He sat straight as a statue but his thin moustache ruffled as he exhaled.

“You ready to go, Shakespeare?”

I turned the keys in the ignition. The car fired on. I tugged the car into reverse and crawled down the driveway.

As I turned onto the street, I said, “Everyone better put their seat belts on.”

Kerouac mumbled something about “his day.” I buckled mine and glanced back at Shakespeare, who held the buckle in amazement. I placed my eyes back on the road and turned right.

“I want to write a book,” I said, “But I can’t quite figure out what to write. I don’t know what I need to say. Why did you two write your books?”

Kerouac looked over so his dark eyes glared into the side of my head.

Kerouac lowered his head again. A gap in his hairline ran through his crown.

“What can a man do but what he must?” Shakespeare exclaimed, without moving his head.

“Not a damn thing,” Kerouac muttered.

“Are you even a writer?”

“Yeah? What have you ever written?”

“I’ve written lots of stories, and poems, and comic strips. All sorts of stuff. And I’m thinking of writing a novel now, too.”

“Thinking of writing a novel? If you were a writer, you’d already have pounded out that novel and been working on your fifth. You said you were 21? By the time I reached your age, I already had a million words piled up behind me.”

“That’s your problem?” Kerouac said. He scratched the gray scraggle on his cheek. “What kind of a problem is that? There isn’t anything to write about but yourself and your own story. Put your own life out there in all its heavenly glory and you’ll never run out of words.”

“Your own life?” Shakespeare squealed. “What audience would care to hear anyone share his own life un-extraordinaire? I wrote about the universal experience of man, of great men, great love and great loss, because what is there to write about but what I know all people know?”

“The only thing we know is where our life has taken us,” Kerouac sputtered. He laid his head on his fist and looked back at Shakespeare. “You’re just scribbling lies if you aren’t writing truthfully.”

“To write with truth is surely what you need to do,” Shakespeare said, “But this truth need not have run through your own veins. Its nights can be spent merely in the mind and still a supremely splendid seedling of a story may be sown. The truths of other men can be borrowed and moulded to form the story you need to tell in truth.”

“Well Bill, there’s a reason you are who you are. But if this boy wants to get anywhere without spending his life researching through books he doesn’t want to read, he’s got to write what he knows.”

I turned off the highway exit at Mississauga Road. I followed a silver truck down the suburban street, where gigantic houses lay on massive lots. Soaring trees stood over the street.

I nodded. “I could write about my life, but I don’t know what other people would care about. I kind of agree with Shakespeare that you need something more to it.”

Kerouac stared at the gray floor mat for a while before he said, “What hit you? If it hit you, it’s bound to hit other souls. We’re all part of the same fabric, after all. That is, if you write how it really went down and how you experienced it, people will care.”

“All I’ve lived is a suburban life, chilling with my friends. Sure, there’re stories, but they ain’t the road adventures you wrote.”

“All the world’s a stage,” Shakespeare roared, “And all-”

“We all know the speech,” Kerouac snapped. He bolted his head to me. “If you’re a writer, you’ve got to write everything you need to write. Make your story what you need it to be. And write it as many times as you need.”

“Oh?” Shakespeare gasped. His eyebrows stuck high into his large forehead. “If you write with truth, all you should need is to write it once and it will be what you meant to write, if you write the truth.”

Kerouac shook his head. “I tried that. Doesn’t always work.”

“I’m just not sure that I’m ready to tackle a novel yet. I’ve written a bunch of short stories, but I-”

“You know what, kid,” Jack said, with his eyes beating on me, “I don’t think you’ve got what it takes. It takes a natural energy that you know you’d have if you had it.”

I passed the blue sign of the University of Toronto Mississauga marking the entrance I used for the last 3 years of my University life. I drove past it and sucked in a large breath of air and released it. I pressed on the pedal as the street inclined steeply past a beautiful green forest. I never visited the University in the summer before. I turned my blinkers on and spun the wheel right. I passed construction workers drinking coffee at a site at the corner, behind a row of brown townhouses.

“I must agree with this heavenly brute to my left,” Shakespeare said, “It’s not for everyone and you don’t strike me as the sort ready to write.”

I passed a blue sign that read Putnam Place. I turned at the first right and parked in an empty parking lot behind the townhouses. I took the key from the ignition.

“What do you guys know about who’s right to write? Shakespeare, you’d probably say Kerouac shouldn’t write if you read half his work. Hell, I think it’s all poetry but still, you know what, screw you guys. I’ll write a book and I’ll write it exactly how I want to, and that’ll be that. What the hell do you guys know?”

Kerouac crossed his arms over his chest. “You know kid, I might’ve been wrong about you.”

I got out of the car and slammed the door. I opened the trunk and pulled out my backpack and my last box from home. On top of the box sat paperback copies of “The Town and the City” and “King Lear.”