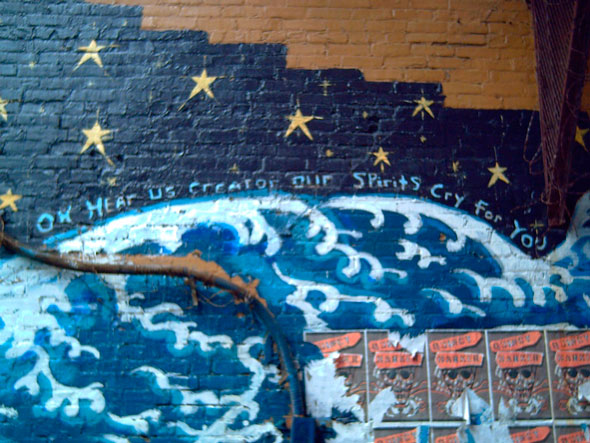 Cities are exciting places. They have a vibrancy about them; a sense that no matter who you are, what you want or what you need there is something here for you. This is the fantasy on which cities thrive. They need it to function. I love it for its optimism and its energy, but I have to remember that it is a fantasy. Cities are full of people who have not found their niche. Some live quietly with their problems, others are much more visibly struggling with addiction, mental illness, poverty, homelessness, loneliness. These people serve as an uncomfortable reminder of the fallacy of our dream. There are so many people in need, and none of us can take care of everyone. So we pick and choose, and inevitably some get left out. In large cities we taste the bitterness of this every day, and though we feel it keenly, we don’t know what to do.

Growing up in Toronto this was my daily experience. Moving to Waterloo in first year was something of a culture shock. Around me were people who were demographically like me, and yet I felt lonely. There seemed to be a breadth of perspective missing in this city; I felt suffocated by the sameness.

As I started to sort out the confusing jumble of cities and towns that is this region I learned about Kitchener. According to popular opinion, Kitchener is sketchy, scary, and unsafe. I, however, felt quite comfortable there. In fact I felt more alive there- was I missing something?

One day as I walked through Waterloo with a friend from Guelph we came upon a poorly dressed man shouting at somebody neither of us could see. I did my best give this man space and dignity as he dealt with his demons. I didn’t look, didn’t laugh, I hardly skipped a beat in the conversation as we passed him. My friend however stared and laughed incredulously. When we arrived at our destination she told our friends about the incident who all reacted the same way. I was aghast. Were these people so sheltered? They looked at me with sadness and told me I was desensitized.

I mulled over this for a long time and here is what I came to: In my twenty-two years I have known many people who have struggled with mental illness. I have a history of addiction in my own family, and as an artist about to graduate with no career plan, I have to accept that poverty may be in my future. So I have difficulty feeling all that separate from the people I see on the streets of Kitchener. Of course there are some things that separate me. They are luck and privilege, and I am acutely aware that I have not earned them; they are not within my control.

Kitchener is in the unique position of being a small city with big city problems. The majority of the social services for all of Waterloo Region and Guelph are concentrated in the downtown core of Kitchener, meaning the majority of people who rely on social services are also in Kitchener. So Kitchener is written off while in neighbouring cities teenagers turn into adults without having witnessed the spectrum of life experience. I don’t know how to solve this imbalance, nor do I know how to solve poverty, illness or addiction. I only know that action is a reflection of attitude. If we demonize people, neighbourhoods and cities we dehumanize them and ourselves. If we only view people with compassion, we may be one step closer to fulfilling the fantastical promise of city life.