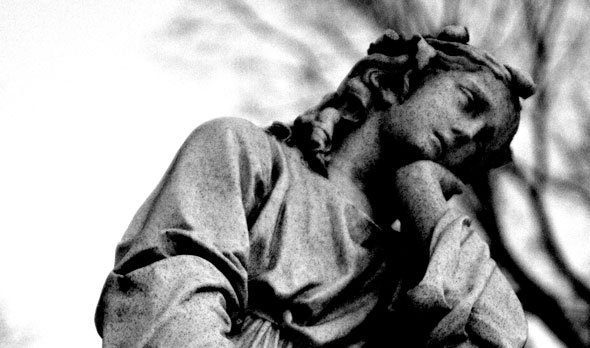 A man of good stature leaves the CEO’s office, closing the door behind him to end the day. In a fine suit, younger than his newborn daughter, he makes his way out of the office building and to his car.

“Going home to meet the flowers,” he sings to himself.

The flowers in tune are the multi-coloured roses that were delivered to his wife this morning.

“If she’s got ‘em in a vase it means things are well.” This particular verse he sings jazzily.

The man tosses his briefcase into the car ahead of himself. He turns on the car and it runs. It runs on the road under the sky and through 20 minutes of the evening. It runs from his office to his house athletically.

“Bonjour my petite perennial,” he kisses his daughter.

“And Madame!” He kisses his wife and eyes the flowers beside a vase on the kitchen counter.

The man’s expensive imported shoes drop off his sock-feet and he ‘wooshes’ his baby around the kitchen and to the dining room where he places the baby in her highchair.

Forkfuls of green beans, chicken, and mashed potatoes make their way to parental mouths while much attention is paid to the baby. Baby you’re a comedian. Rubbing a handful of food on the side of the highchair? Peeing your pants at the dinner table? Baby, you tiny quipster, you little object.

Husband sterilizes baby and dinner dishes while mother rests on the couch in the numbing blue light of the television screen. With dry plates and dry hands, husband finds toys behind baby’s ears. Baby laughs a joyous laugh.

“Come on my wee flower.”

Husband and daughter join wife to swoon. With flashing pictures, sounds, and light, the television tells of today while the bambino chews on the corner of a book, her hand, and then the book.

After stories, lights out, and walkie talkie tears, parents are in pajamas and pajamas are in bed.

“It was thoughtful of you,” the woman tells the wall.

“They were great,” she explains to the backs of her eyelids.

There is silence for a moment. “Great?”

“Sorry dear, they were god-damn unbelievable.”

The silence is repeated.

“That surely won’t solve anything.”

“There wouldn’t be anything to solve if you understood me.”

The man is silent for some time. For some time the woman looks at her crossed flannelled arms for support. The man drifts in search of a solution.

“Do you remember wife, when I used to chase you around?”

“When we were younger. Remember I used to be hypnotized by you and followed you around?”

“You dated heaps of other men and I waited until you finally saw me.”

The baby radios in a whimper from the other room. Parental patience. The room is silent and only headlight shadows from passing cars move along the bedroom wall. The bed is a King, the sheets are silky, and the room was recently re-redone. The baby’s whimpering subsides.

In the morning, with a fine suit no wiser than his daughter, a man of good stature enters the CEO’s office, closing the door behind him to start the day.