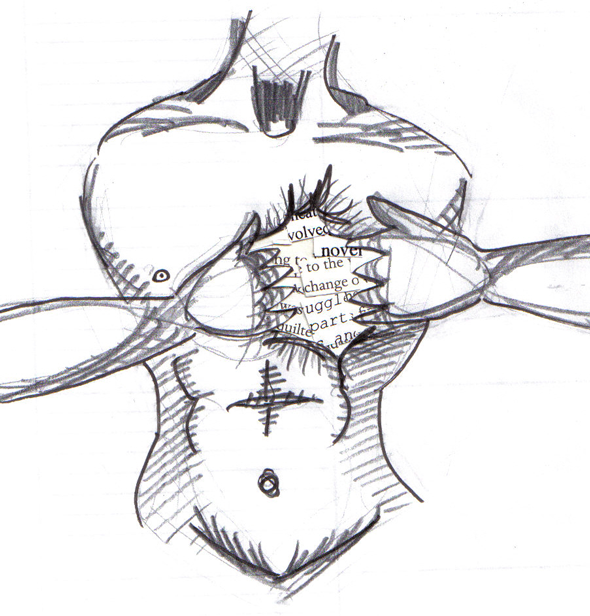 Simranjet is a young man, working in the ore mines, somewhere in the north of Kivu, the Democratic Republic of the Congo.

Jordan is a teenage boy, attending high school, somewhere in the south of Ontario, Canada.

Simranjet lives with his brother, enslaved by rebels who sell the ore through a middleman to companies, either oblivious or indifferent, outside the country.

Jordan lives with his parents,

In the past month, Simranjet has worked harder and Jordan has sent more text messages for the same reason. Simranjet met the beautiful and tortured eyes of a girl working in the same mine. Jordan met the firm and rounded cleavage of a girl attending the same math class.

They are in love.

Simranjet is trying to work, but frequently his gaze strays to the girl. Her shirt is torn in the back, but there is something deeply comforting about her suffering. He is not alone in the mine.

Jordan receives a text message from the girl. She is sitting in the back of the class, wearing another low cut. He hides the cell phone under his desk to read the message: “If I M U and U R 2 what R we?”

Simranjet tries to work and watch the girl, but his attention divided – along with the intervention of his brother – overwhelm his already tired senses, and causes him to cross paths with another worker, whose tool crashes against Simranjet’s. In a flash of sparks, Simranjet’s hand is struck by the tool.

Jordan laughs at the message from the girl, a reference to a past joke they shared between classes. He responds: “LOL! WHAT?”

Simranjet crushed his hand so that Jordan could send the text message: “LOL! WHAT?”

Jordan receives a message: “I think U R cute!” Simranjet is taken by the guard, dragged outside, to the authorities. Jordan works furiously behind his desk, squinting to see the small keys and jamming his fingers to use them, typing and sending a message: “I WANT 2 TELL U SOMETHING.” The authorities remind Simranjet that the tools are worth more than his life.

Simranjet’s life is worth less than the tools so that Jordan could send the text message: “I WANT 2 TELL YOU SOMETHING.”

Jordan receives a text message: “WHAT?!?” Simranjet sees the gun in the guard’s hand. He sees the larger gun in the authority’s belt. Jordan eagerly types his confession: “I <3 U!” Powerless, Simranjet returns to the mines, so that he may live to see another day.

Simranjet returned to the mines so that Jordan could send the text message: “I <3 U!”