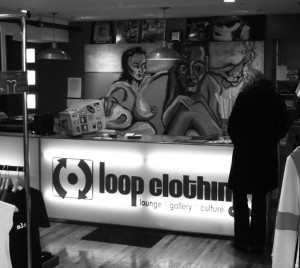 “EXPERIENCE where LIFE meets STYLE” – such is the motto of hip Waterloo clothing retailer Loop Clothing. I say clothing retailer, but in fact, to label Loop as as such would be a gross understatement. Loop Clothing is so much more than just fashion…they’re culture. Why else have numerous publications covered the store’s story, and why else would the CBC be clamouring for an interview?

Loop Clothing is the brainchild of Laurier grad Alnoor Keshvani, who graduated from communication studies in 2001. “When I graduated, I worked for a large corporation and I hated it,” recalls Keshvani. “It just wasn’t for me.” He soon found himself traveling on a train that took him from Toronto to Vancouver, stopping and checking out clothing retail stores along the way. “I had always wanted to go into business for myself, and I just love fashion and clothing. I developed my idea for the store on the road, I just wanted to create this cool relaxing place where people could experience more than just fashion…and that’s what we’ve done.”

When I said that Loop wasn’t you’re average clothing store, I wasn’t kidding. In case you’re not familiar, the store’s King Street location in the basement of the Princess Twin Cinemas offers a unique blend of fashion, art and music, to provide a complete cultural lifestyle experience. It doubles as a lounge; on Thursday and Friday nights their resident DJ SPINS it up, while Saturday nights are reserved for live acoustic performances from area musicians. In November, they will be giving local artists the opportunity to use their display windows as exhibition instillation space. They like to use their space as much as possible, by displaying paintings by local/international artists, to inform people of being media conscious, and politically conscious as well.

Then of course, there are the clothes. Loop’s independent clothing lines are unique, and they have exclusive regional rights for a number of them, such as Freshjive, Criminal, Illmatic, Franklin & Marshall, and Triko. Along with Toronto’s The People Have Spoken and Montreal’s Perplex & Lola, they offer a number of Canadian-based labels including MOU, I Clothing, Dagg & Stacey, and Scribe. They also have their own in-house designer label, Snap, where in-house designers will rework orld clothes to create a one-of-a-kind piece…and yes, they even make custom bikinis.

With their one-year anniversary coming up, Loop Clothing is celebrating their past as well as looking to the future. “As far as time is concerned…it’s our first year in business, so of course there’s a lot of goal-setting importance. I’m happy to say that financial goals we had set were hit right on track, so that’s a really big thing for me. You know, most businesses, after their first year they loseWeight Exercise money…but we’re doing okay,” says Keshvani. “As a milestone, our goal is to take this concept and over time replicate the idea across Canada.”

“We;’re not just your run-of-the-mill store,” Keshvani explains. “Our big picture is that we offer the total lifestyle package. Culture, music, art, clothing, fashion, it all goes together, and I think it’s important to mix them together as one positive experience. When you’re into music, that comes from a culture that has fashion as an entity, and art is a part of that as well. They come together as one lifestyle, and that’s what Loop Clothing is all about.”

The store believes in getting involved in the local community. “We want to use a direct approach,” says Keshvani. In the past, Loop has participated in charity fashion shows, including Runway For Hope at Starlight this past spring, a fundraiser for the local Willow House Cancer Support Centre. When they first opened, they held a food drive for the Cambridge Food Bank, which had been robbed and was low on supply. Furthermore, this summer the store sponsored Anatole Reyas, AKA “Uptown Waterloo’s $2 GUY”, by providing him with food and clothing in exchange for him advertising the Loop Clothing logo on his shopping cart. Sponsoring local artists by giving them a venue to gain exposure, and carrying indie clothing lives to give up-and-coming designers a chance to sell their wares are a few more ways Loops likes to give back to the community. “We like to see directly the impact we’re having, instead of just assuming it does by supporting some random charity.”

So how does Loop fit into your life? Keshvani wants his store to provide students with an experience they was otherwise not experience. Let’s face we all tend to fall into a specific circle of friends, hanging out at the same places all the time. Loop Clothing hopes to change that, and emphatically so. “Since I was a local student, I know what it’s like,” he emphasizes. “I want to expose students from Oakville, Montreal, Vancouver, wherever they come from, to the local culture. I want them to get a different perspective of Waterloo – the concerts, the art, of course the fashion. I want to provide a heightened univeristy experience, expose students to stuff outside the campus bubble…because you never leave the bubble otherwise!”

“I just want students to know that yes, there is life after Laurier. And there’s also something to be said for supporting something that’s genuine, that’s grassroots.”

So while you spend your time here at Laurier, be sure to spend some time in Uptown Waterloo. There are a lot of very rad stores to be found, and Loop Clothing is just one of them. “I think one of the biggest things I’m trying to do is bring it back to the days of coming Uptown, or going Downtown, and meeting a store owner, and building that relationship. In all these box stores they’re building now…man, they just don’t give a shit in those stores,” Keshvani rants. “And yes, I just said ‘shit’!”