Unsigned #1
The Students’ Union has decided not to renew Student Publications’ lease on our production space for next year. Why? Something about storage space and the expansion of the completely adequate 24-hour lounge (bigger is better). Thanks for nothing.

Next year, SP’s digs will be in the old Housing Office in the basement of MacDonald House, which will surely have no negative consequences whatsoever. It’s an okay spot, the main problem being the division of space. Currently we have small offices and a large production area/lounge, but that setup will evidently have to change. It may very well be a better location for the Student Publications office though, perhaps encouraging a more student-centred vibe that may have been missing on the very buttoned-down 3rd floor of the FNCC.

The point is, we were pushed out by a very corporate Students’ Union, incoming and outgoing, whose purpose supposedly is to look out for students, and to maintain important (important!) entities like the newspaper and the yearbook. This isn’t how to run a university. 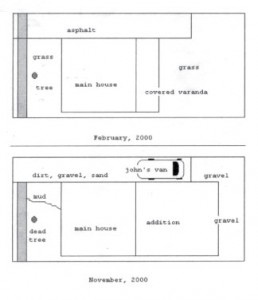 Unsigned #2
Upon returning to Waterloo, ready to begin our first year living on our own, all six of us, friends from residence, discovered that over the summer a giant addition had been added onto the back of our wonderful new home, for which we had signed the lease. No word from the landlord, no sorries. Only a litany of excuses and insensitivity.

You’d better believe the job wasn’t finished. Laying brick during midterms, strangers using our laundry, noise, money issues, loss of five whole windows. Landlord, sons and wife in our driveway every single day. We ended up leaving before the lease was up, having (mostly) lived up to our end of the bargain. We left nothing behind.

My first rental, everyone’s worst nightmare. We were too fed up with the whole situation to nominate him for worst landlord in town, although we should have, so others like us wouldn’t have similar experiences.

It became such a large part of my life that I gave a speech on it in my BU208 class, and this diagram was my handout. Notice the increase of mud and gravel. John’s van became a permanent fixture, and ruined my second year at school.