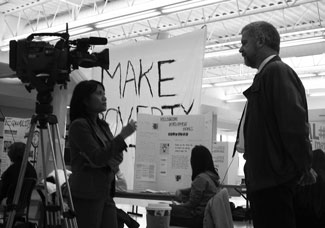 By the time people are reading this article, Make Poverty History Day will be nearly a month behind us. But obviously, the problem of poverty will not. Many times I have been asked how a single day of ‘awareness’ was supposed to make a difference towards such an overwhelming situation. Some people have gone so far as to call the organizers of the campaign hypocrites. While I think that the criticism of hypocrisy is somewhat ignorant, there are some aspects of the campaign that are rightly questioned, and there are some legitimate concerns that people may have with student activism in general, and the goals of the campaign specifically.

As far as student activism goes, people need to be aware of what the concept really involved. No one is pretending that anything we do on campus is going to make any kind of immediate or noticeable difference in the lives of people suffering from extreme poverty. Some might ‘call bullshit’ on me here, saying that we could easily organize a clothing or food drive. To that I say that these things do occur on campus during the course of the year, but more importantly they occur in the community around us. I see the role of student activist organizations as being to create an awareness of the urgency of issues and the desire to do something about it. The more people there are whose actions are guided by a framework of compassion and equity, the more real change will be possible in the world. And since students are the ‘leaders of tomorrow’, we do have a very real opportunity to increase the number of educated people who feel a moral and ethical imperative to act towards making poverty history in our lifetimes.

When it comes to criticism of the campaign specifically, what I hear most of all is that some people believe it to be economically unfeasible to ‘cancel the debt’. I personally don’t quite understand economics and math, so they may be right. However, I suspect that this perspective comes from a framework that does not include giving up our mass hoards of wealth and unsustainable lifestyles in the affluent parts of the world. And I suppose it is a given, that if we aren’t willing to share, poverty will be with us until the end of time.

Another issue that some might take with the campaign is its somewhat pretentious and ostentatious nature. And I do somewhat agree. As large a part as I personally played in the ‘wrap it in white’ part of Make Poverty History day, I do acknowledge its showiness. But it worked. On Monday the 17th of October we collected hundreds of signatures, sold hundreds of make poverty history bracelets, and watched dozens of people decide that it was finally time to get involved with a campus organization that is interested in exploring and experimenting with ways that students can work towards a ‘better world’.

However, probably the biggest problem with ‘Make Poverty History’ is that a major component of the platform that it is pushing is the United Nations Millennium Development Goals. This list of eight general goals includes things such as combating hunger and extreme poverty, child mortality, HIV/AIDS, malaria and other diseases, and promoting universal primary education, gender equality, maternal health, environmental sustainability, and global cooperation. There is a simple reason for not discussing the particulars of those goals. The target date for the goals is 2015 and there is, categorically, not a chance in hell that they will be met by then. We are already almost four years behind schedule, and we’re only five years into the plan. Neither Canada nor the United States has yet committed to a timeline for the minimum necessary aid allotment of a measly 0.7% of GDP annually.

So, if we’re going to fail, why did several dozen students at WLU spend a lot of time and effort on an awareness campaign? Simple: the reason the MDGs are going to be met is because people like us (citizens from ‘first world countries’) have not demanded from our governments that they be met. And that’s really all it would take: a decision. Some may think that economic interests and multi national corporations are too ingrained in the hierarchies of power for this to be possible. But the same was said about slavery and women’s rights. No matter how entrenched a particular injustice is, the only pre-requisite for finding a remedy is for people to become aware of the true immoralities which they are actively perpetuating.