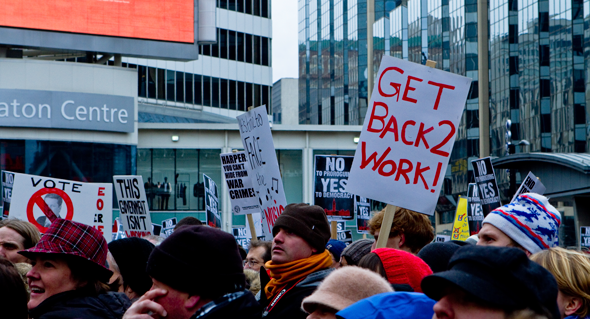 Why do I study Canada? That is a question I have been asked a lot and it is a question I frequently ask myself. I am about to finish my undergraduate degree here at Laurier as a Canadian Studies major and I plan on continuing with my studies at graduate school in the same field. Canadian Studies is an odd program as Canada is an odd subject, never quite fitting into one specific discipline.

So, why do I study Canada?

I love this country. I always have and I always will (unless it becomes a hot-bed of right wing conservatism, then I might move to Sweden). Barring that however, the identity of this nation will always fascinate me and it will always be my home. I am not a nationalist, for nationalism breeds war and distrust. I am a federalist and a Canadian, the definition of the latter being still yet undefined. I take pride in this place and I don’t see there being anything wrong with taking a little pride in one’s home.

It would be easy to just focus on the negative aspects of this country, and as a feminist, tree hugger, and activist it can be difficult to not see past the major suckage and systemic oppression that pervades nearly every aspect of it. I could choose to only focus on our horrible treatment of native peoples and immigrants; the rampant Islamophobia, the deep-rooted sexism and misogyny, racist government policies, the embarrassing percentage of people who live below the poverty line, lack of government support for environmental issues, the list could go on. These are important issues that deserve to have a discourse around them, and need to be addressed by activists and policy makers together. But to only see that, those negative components, is to ignore some of the great things about this country. Canada is not just a place of oppression and evil – there are always two sides to every coin and to disregard that other side is to be pessimistic.

So, why do I study Canada?

While I do study the negative misery-laden topics, I try to also study the positive or at least try to find the positive. Canada isn’t in the systems; it is in the little moments.

Why do I study Canada?

Because every time I see that CBC logo, I get a little thrill.

Because Colm Feore is a brilliant actor (and handsome to boot).

Because when I was working in Brampton this summer I saw a bunch of children playing together in a residential park, all from different backgrounds, and their mothers were sitting together on the benches, talking.

Because we call it ketchup, not cat-sup.

Because institutions like the National Film Board and the CRTC work to ensure that a Canadian memory is recorded for future generations.

Because gay marriage was made legal here and no one blinked. Harper even wanted to overturn it but didn’t because it wouldn’t have been a good move for him politically.

Because we spell words with a ‘u’.

Because Trudeau was friends with Castro and not just to piss off the Americans.

Because despite its flaws, we do have universal health care.

Because Battlestar Galactica was pretty much made entirely by Canadians. Frakk’n eh.

Because Dr. Henry Morgentaler received The Order of Canada.

Because of Rick Mercer.

Because of those Heritage Moments (“I smell burnt toast”).

Because Camille Turner (read: Miss Canadiana) is overturning our flawed perceptions of identity.

Because women got the right to vote in 1917, except in Quebec, which was decades before some other nations.

Because of Deepa Mehta.

I could go on and on. There are so many reasons why I study Canada. And you might be thinking that these are superfluous reasons that don’t reflect the nation as a whole, and sure, you might be right. At least though I try to see the positive through the negative.

Try to keep things in perspective; Canada isn’t the worst place in the world to be. Try a find something that gives you a little bit of joy. Embrace the cheesy myths that are propagated by the government and find new ones for yourself. Throw on some Fiest (or Celine Dion if you want to take it old school), watch an Atom Egoyan film, eat a butter tart followed up by some samosas, then look around you and don’t feel bad if you feel a little good. Canada is still a work in progress.