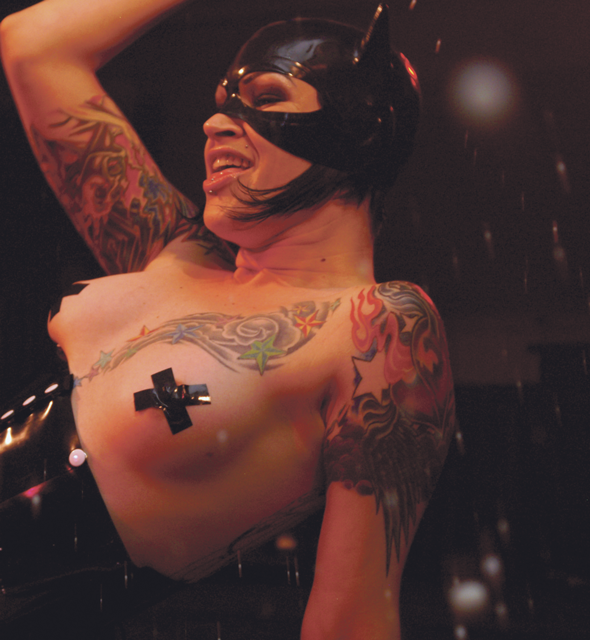 The coming out process. Things that come to mind – fear, anxiety, honesty, liberation… There’s a lot that can come out of this process (pun intended!), both positive and negative. All I know is my own process, nobody else’s; the problem is, I can remember how my process went.

It’s been a while since I came out. My mom, dad, sisters, some of the extended family, boss, professors, peers, mailman, the girl at the Stag Shop, and the barista at Starbucks all know. I miss coming out. I loved the adrenaline and the questions that ensued. “Do you think so-and-so is hot?” “Do you use a strap-on?” “Is that why you like Ellen so much?”

Another big question is, “are your parents cool with it?” The truth is, completely! They love me, they’re proud of me and the work I do with the Rainbow Centre, and they couldn’t be more supportive and welcoming of my girlfriend.

That said, knowing that my parents couldn’t be more supportive, I ponder. Have they ever experienced a coming-out process of their own? People say that parents of queer children go through their own coming-out process. It makes me think of one of my favourite episodes of HBO’s Six Feet Under where the character Ruth, who has a gay son (David), is reading a book called “Now That You Know”, a.k.a. now that you know your child is gay…

Did my Mom ever buy a book like that? I decided to get the facts straight from the horse’s mouth. The horse being my Mom.

Did you ever know or have inclinations that I was gay before I came out?
No. I always thought of you as different from your sisters, but I never put a label to it. I generally never jump to the conclusion that someone is gay until they tell me.

Did you find you experienced a coming out process as the parent of a queer child?
Yes, in fact I find that I’m still experiencing it since a lot of people still don’t know. It generally isn’t on my mind, but sometimes I’ll meet someone who also has a queer child and I’ll feel a bond with them somehow. For the most part I don’t really think of it as a big deal, but I’m aware of it and it’s just kind of there.

Did you think of me differently after I came out?
When you came out to me, you identified your sexual orientation as bisexual, which was new to me. It took a while to get my mind around it. I really think “gay” is an evolved term, and it has branched out into a lot of new terms that I don’t always understand, such as “queer”. However, what I do understand is the idea of identifying with a community and protesting against being pigeonholed. I can appreciate that.

What do you think of some of the extreme reactions some parents of queer children have? For example, a child being kicked out of their home.
It really comes down to a matter of love. I don’t want to judge those parents, since their opinions are formed in some way that they didn’t necessarily choose. There’s been a revolution of understanding in terms of human sexuality, and it’s not something that happens quickly or over one generation. Everyone should be respected and given equal rights, but you need to understand that there are still prominent institutions that promote the idea that being gay as wrong. Parents aren’t the only ones reacting in this way, so it’s a slow process and it’s hard to change your beliefs, especially when you feel that your child’s coming-out is a personal attack on you.

Do you have any advice for queer-identified individuals who are nervous or anxious about coming out to their parents?
Although sexual orientation is who you are and not a value you hold, I can still identify with being different from my parents. In fact, most people choose different routes from their parents in some way. If I can suggest anything though, it’s to have a support system for yourself before you come out. I think that it’s an act of self-love to seek out a community that helps you understand/accept who you are. Also, everyone needs to remember that we are not defined by our parents and that they don’t have to have any reflection on our individual. Growing up is an on-going process, and in accepting who you are, you have to stand up for yourself knowing that you could be rejected. There’s nothing easy about it.

…So there that is. My mom is the coolest lady, isn’t she?

Now it is time for me to plug the Rainbow Centre. This is rather self-indulgent, but completely applicable to this issue. The Rainbow Centre is just the kind of support system my Mom was referring to. It’s is a safe, fun and supportive space where everyone at Laurier and in the broader community is welcome, regardless of their sexual orientation or gender identity. We advocate for and provide awareness about the LGBTQ community, while acting as a social outlet and resource centre. More than all of that formality though, the RC is where I hang out, do schoolwork, make new friends, talk about current events (both queer-related and not), and generally have a good time.

The RC is also a great place to work through what can be the toughest process in a queer-identified individual’s life: coming out. However tough though, coming out is necessary I think. After all it’s the difference between being you and, well… someone else.