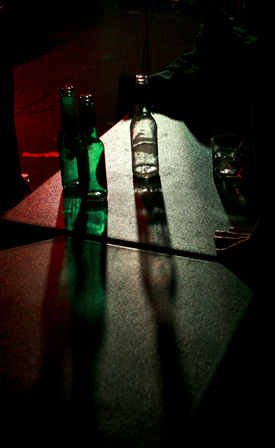 Waiting for You, Nick Lachance

It was around the time that I switch from beer to whiskey, no breeze and Indian summer, that my ex-lover walks onto the patio and asks to move to a table in the shade. We catch up on all the weekly boy/boy drama: who’s fucking who, who’s in Toronto doing what, a funny anecdote about run-ins with drag queens. I drink, laughing and smiling.

Then something shifts. He has more to say about who he’s made cry in bathrooms at parties and who he’s made out with on kitchen counters than anything I could whine about from my past work week. I find myself staring at the smudged admission stamp on his wrist.

I realize that while he’s here to relish in his present, I had waited all week for us to sit and remember the past. A song comes on from two years ago; I stop his story to laugh about the one time we danced to it while waiting for a cab home. He doesn’t remember.

I sit and stare onto the street, watching busses and beaters go by, thinking about when everything was simple. Fake-IDs and drinking away the tips I made waiting tables during the day. Retro nights, with hair dye and old men winking and willing to buy us drinks. Everything I could do and say, opinions I was allowed to have, no fear of commitment or strings, and no reference to repercussions. When people had an idea of who I was when my name was uttered in a room, or called out across the floor. A reputation.

I shake his hand on the way out, smelling the same cologne that had been there years before. I tell him it was my day off, and that I was off for a workout. He talks about the plans he had for the rest of the day, all reminiscent of the lifestyle and culture I’d once introduced him to. I look off in the distance as I say goodbye to him, feeling old, bored and tired. I miss what it felt like to skip down the street wasted, thin-skinned, young, and dancing, waiting for a cab to be called.