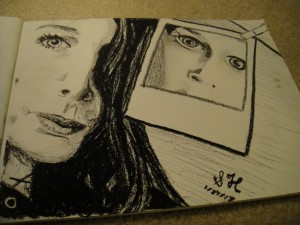 We left San Isidro at 7:30 a.m. heading for one of the many ritzy beach house communities of the coast. Southwest, one and a half hours. San Isidro is a paradise. The whole area consists of a numerous amount of identical houses that look like massive cardboard cutouts, held together by glue and paint. Ten-foot high walls with broken glass and spikes on top surround the perimeter of every home, and meet tall reinforced gates at every doorstep. Each window is barred too. This is to keep the animals out, and there is more than one kind of animal in Lima.

We were inhabiting the home of the most wonderful, welcoming and loving elderly couple I have ever had the privilege of knowing. They reminded me of my grandparents, the Italians, and staying at their home brought me back to Sunday afternoons spent under my grandfather’s pear tree, and picking grapes from vines in their backyard that he would later turn into wine. I would never get to taste my grandfather’s wine.

The sun was high and you could see the heat in the air touch the sand and rock of the desert as we flew down the highway. I had never seen the desert before, nor had I felt the powerful heat that radiated from it. It was baron and featureless, until the mountains began to rise from what seemed like out of nowhere. They looked like castles made of sand and clay; one touch and they would fall apart.

In the distance, I saw them. Dots of white, yellow and red. Dots turned into shapes and when I began to see larger rectangles, I expected more cardboard cutouts. When I was finally face to face with what I had waited to see in the distance, I quickly realized these were not the homes of San Isidro. Entire walls were missing, roofs were gone; there was graffiti on everything. It looked like some strange, post-apocalyptic world, as if a bomb had been dropped and it was now uninhabitable because of radiation. I thought “God, how long had this place been abandoned?” Then I saw it; a single line with clothes piled high on top of it, connected from wall to wall on one of the roofless building tops. Then I saw a second, and a third, then many. I turned to the person next to me and began to ask, “but…”

I turned back towards the window and the town had vanished as if it had never existed. Just more desert and castles made of sand and clay.

Moments later, I saw more dots in the distance. Red and orange, but this time, the dots only grew into small squares instead of large rectangles. They never grew that much at all. They were shacks, spread out among a large portion of the desert. Each one no bigger than a compact car, all of them made of tin and cheap pieces of scrap metal. They were orange and red from rust and sand that diminished the metal homes each day from the intense desert winds. Again, I saw them; the lines piled high with wet clothing.

I looked to my side once more. She shook her head. A voice from the front of the car spoke, saying, “These people travel miles for clean water. There is no water here, but these are their homes. Many of them come from the desert and the mountain villages and look for a place in Lima, but the divide is so great that the wealthy pay no attention to them. Many of them are children who can’t read, and when they ask for assistance, people turn their noses to them as if they are dirt.”

In the time I’ve spent here, I’ve grown to love this country. I’ve established a connection in such a short amount of time that I have never felt elsewhere in all my travels. The colors, the food and the humanity fill my soul with warmth and life, and though I am not from here, I looked once more upon the desert homes and thought; “these are my people.”

As we came closer to town, we were stopped in traffic. A young boy of about eight or nine went from car to car selling mango and pacae. As the traffic broke and the cars began to move, the boy jumped to the side of the road and sat in the orange sand, waiting for the next moment of standstill traffic to begin.

We made a right, then a left, and then one more left, making our way further away from the desert of broken bottles, rickety fences and metal homes for the gated beach house community where we would spend our afternoon. One needed to be on the guest list to enter in. The houses were white and spacious with glass doors and were owned by those who could afford them, though many families only occupied them for a few weeks out of the year. There were no vendors, or selling of any kind. No loud music or parties after nine, and the maids had to wear white and were not allowed in the pools. Each house had its own private hut on the beach. When we reached the house of a friend of a friend, I felt for the first time how hard privilege was to swallow. We had a drink and walked down towards the beach.

My feet had now finally hit the sand. It was clean and beautiful, and the ocean tremendous and rough. I stared at it, and then at the sun above me. My feet touched down to the water in front of me, and then I turned to look back at the desert behind me.