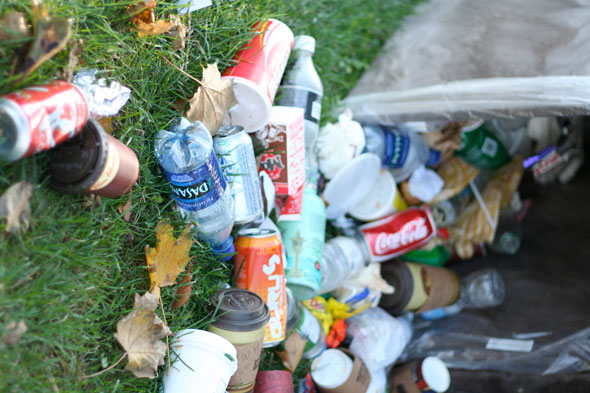 Until only a few days before this magazine was to hit the stands, I had very little to say about debauchery. It seemed an old-fashioned word largely unconnected with the way I live my life. Then came homecoming weekend. As I waited at the bus stop on my way to the Saturday farmer’s market, I marveled at the many purple-and-gold-clad students already partying for no apparent reason. As the morning went on I ran into many friends not wearing Laurier shirts, bought yummy local produce, and if I thought at all about homecoming it was with mild amusement at the contrast between the predominant Laurier culture and the local-market-loving circles in which I travel.

I had cause to think more seriously about this on my way home when I witnessed a disturbing scene between two homecoming celebrators. The man, who had ditched his “go-Hawks-go” shirt in favour of showing off his muscles, draped his arm around the shoulders of the woman he was with and tried to steal a kiss. When she pulled back he grabbed her arm and stopped walking, pulling her to him. They stood in seemingly tense conversation that I could not hear as I passed them. I glanced repeatedly at them trying to ascertain the severity of the situation, trying to measure the fear in her face, the grip of his hand. She glanced around furtively, but we never made eye contact. He was now stroking her arm in a way that could have been affectionate but seemed menacing to me. I walked past, repeatedly glancing over my shoulder but doing nothing, with a sick feeling filling my body.

Did I overreact? One could argue that nothing criminal could have happened in broad daylight on King Street. Unless you count the insidious dismantling of a young woman’s self-esteem as criminal, which I think I do. This seemed to be the kind of quiet brutality that goes underreported, glossed over in popular media and the “just say no” approach to high school sex-education.

I thought about her all afternoon. I wish I had said something. But what could I have done? Growing up in Toronto I was taught not to stare, not to point, not to ask questions, not to get involved. I appreciate my parents’ efforts to protect me, but now I am a privileged, educated, usually confident woman crippled by doubt whenever I have an opportunity to help someone. But what could I have done? It is possible that asking if she wanted help would only have made him angry, and that is a possibility that scared me. I could have offered her a phone call, but to whom: 911, Laurier security, a friend of hers? Likely the person on the other end would not react with the sensitivity needed. Unfortunately, our society is not attuned to react to this kind of subtle violence. What I could have given her is the knowledge that she was not alone in her fear, the affirmation that his behaviour was unacceptable. I worry that by witnessing but not acting I did the opposite.

Now, the moment long gone, all I can do is write. Write in hopes that someone who has been similarly passed by in a time of need can know that I wanted to help you. Write in hopes that something in our culture can start to change, so when we extend the best of our love and strength to strangers we know we will be backed up with support and sensitivity. And write in hopes that the divide between the debauchery of the homecoming crowd and the empowerment of the Blueprint-writing crowd will begin to close. For what makes me sad is the narrow likelihood that the young woman or her intimidator will read this article. Currently Laurier has a strong community of students committed to changing the world for the better. It can be so tempting to retreat from the general campus culture into a bubble of informed activists, but there we risk our most immediate opportunity to affect change. By reaching out to the wider campus community we can empower those left vulnerable by their social culture. I’m obviously not sure how to do this; this article is all I’ve got.