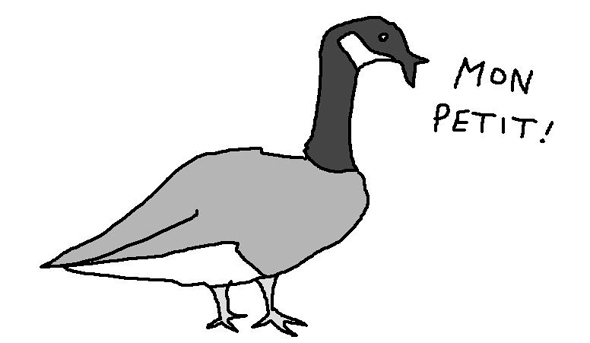 Here in Waterloo, our two universities are not only home to flocks of students, but flocks of geese as well. As a student, I have learned to live with the student population and the goose population, though both are prone to disgruntled outbursts when they fear their territory is being threatened.

About the disgruntled students, little is being done; about the disgruntled geese, I was recently informed by a university insider (anonymous for the sake of their job) that steps were being taken to reduce the goose population. In early spring, university workers sprayed the geese eggs with vegetable oil, the desired effect being that the embryo would suffocate and would not hatch in late spring. This is, apparently, common practice in population control – though I don’t see how it’s any better than trapping and killing beavers, an indiscretion that brought the University of Waterloo some unwanted attention in 2006.

I didn’t want to believe what I heard. But come summer as I walked through the campus, I saw that geese were parenting one or two goslings, compared to nine or ten in previous years.

Allow me to put this into perspective: While attending the university and living in residence, a woman becomes pregnant by another student. She decides not to take off the following term, and returns with octuplets. One morning, the mother awakes to find that seven of her eight children have been murdered.
She proceeds to call the police. The police arrive with campus security to inform her that student services has received too many complaints about the children, and they were lawful in their decision to kill them.

Perhaps the geese would receive better treatment if they paid tuition. Speaking from the perspective of someone who has dealt with OSAP, the paper work, and angry calls from the collection agency – during which they uttered threats that far exceeded the threat of smothering and killing my offspring – I sincerely doubt it.