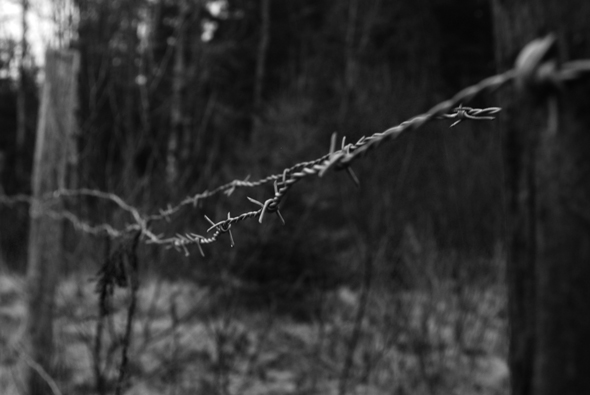 I imagine that there was once an age without borders, an age when the Earth was not mine or hers (and his), but ours and theirs. An age where the adventurous needed only their wits and bravery to explore the world as opposed to paperwork and visas. I don’t remember this age, and doubt that there is a person alive who does. I have read about these times in works of fiction and fantasy, hidden between the implications of metaphor and wishful thinking. But, I have never read of these accounts being manifested in reality. Even North American First Nations, who have often been associated with life in a borderless world, had a sense of territory, albeit not as rigid as their European and Asian counterparts. If peace could not be maintained through treaties, measures were taken to separate conflicting peoples; the Ogijidah of the Anishinabek were peacekeeping warriors who monitored neutral zones. If the Ogijidah efforts were unsuccessful, war over resources and space would ensue. Sound familiar?

Borders have become so tediously protected, so meticulously defined, that we tend to forget how insubstantial they really are. The only force preventing a person from crossing a border are the people entrusted to regulate them. Borders are real in so far as we make them real. They constitute a geographical boundary or legal jurisdiction; but borders can be manipulated, changed or completely destroyed. They have been destroyed: in Siam, Zanzibar, Persia and other lost civilizations.

Borders are more than fortified divisions of land and resources. Outrageous amounts of people have voluntarily died for ‘King and Country,’ so to speak. They sacrificed themselves to protect something they viewed as bigger than their own lives; the essence of who they are and where they belong. Borders define a division of ideology and identity; they provide a physical distinction between ‘us’ and ‘them.’

Nationality gives a sense of belonging in linking an individual through the sands of time to a common origin. It gives a sense of understanding of the unanswerable question of ‘where do we come from?’ and forms the foundations of home. National identity is formed through a presence of common points in people’s daily lives, through the same language, colours, history, religion, cuisine and humor. National identity is undoubtedly important for some, but can also be incredibly destructive. Borders divide us, but they can also keep us united—so long as we’re all on the same side. Patriotism can be easily turned into chauvinism, just like self confidence can easily turn into self importance when the self is attacked.

Perhaps if geography had not separated us as such, humans would have formed a global community where everyone was ‘we’ and ‘they’ didn’t exist. But I suppose that fantasy is only valid in so far as we believe in the benevolence of human nature.