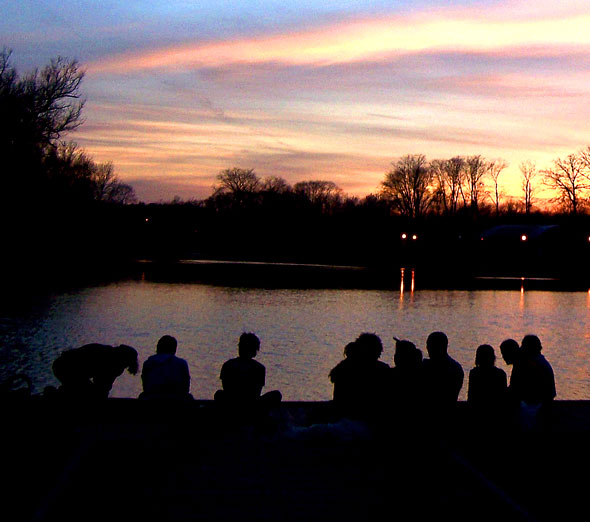 There is a story that I have been told that has guided much of my thinking and actions over the past few years. It is a true story. It is a story about our history, about us. It goes something like this.

In the 17th century, not long after Europeans had first arrived in what was to them a “new world”, an agreement was made between a group of early Settlers and the Iroquois Nations. The treaty was recorded in the Iroquois way, as a Wampum Belt, rather than in the European fashion of words on paper. The agreement, known as the Two Row Wampum, shows two purple lines on a field of white. The design represents two peoples travelling down a river, each in their own vessel, on their own course. They share the river, and they do not disrupt or interfere with the other’s course, or do anything on their own that disrupts the river and the other who travels on it. One vessel carries the Indigenous people and their way of life. The other carries the rest of us; settlers and our way of life.

As I have been told this story, at first, the treaty was held in good faith, and in many parts of the territory, settler and Indigenous communities lived their own lives, with varying degrees of interconnection and relative non-interference. But there came a time when other settlers decided that they wanted the land that the Iroquois peoples possessed and a long process of systematic exploitation and cultural destruction began. As the Wampum shell beads necessary to make new belts were taken away from the people by the soldiers of the settler’s government, the people lost their ability to record history in their own way, and the stories of settlers became the dominant telling of history as they whitewashed the destruction of Indigenous nations and stole their lands.

It was as if pirates had gained taken control of the settler’s ship—our ship. They travelled around in our vessel plundering, pillaging and raping. The pirates had all the decent folk—which as human beings, most settlers naturally are—too scared to resist. Others amongst the settlers had been bought off with the scraps from the pirates’ table; all so easily convinced that these scavengers are the natural leaders of settler society and that all the massive violence perpetrated is the natural order of things—so natural that they barely notice that it is violence at all. These pirates are also genius propagandists and well skilled in the arts of mind control and coercion. And they attack and mercilessly rob the vessel of the Indigenous people at every chance they get.

And that is the story; fucking pirates at the helm. And it is a true story—every word of it. It is even truer than that too. In the city of Waterloo, we live on land that is the property of Six Nations of the Grand River, part of the Iroquois Confederacy. Part of their territory currently spans six miles on either side of the Grand River from source to finish (otherwise know as the Haldimand Tract). Waterloo, Kitchener and Brantford are all on Six Nations land. And as major urban industrial development is planned for KW and Brantford, and as suburban sprawl and/or industry threaten almost everywhere else—as settlers, we are letting the pirates use our vessel as their warship.

As an individual settler, it seems like each of us is helpless. The pirates are scary and they are dangerous and they are organized. The pirates are a gang and they run the ship through the use of their gang tactics: violence and intimidation. But that doesn’t matter; its our fucking ship and nothing we can say or do alleviates our collective responsibility to uphold our end of the Two Row treaty; to conduct our communities in ways that do not interfere with the abilities of Indigenous Peoples to live in their own communities unencumbered and undisturbed by the consequences of our decisions. It requires massive checks on environmental destruction from development, pollution from industry, government interference and police repression. It means a fundamental change in the way we conceive of settler communities on this continent. It means waking up to the fact that our obligations to this place are those of settlers, and that this means something for how we understand our communities