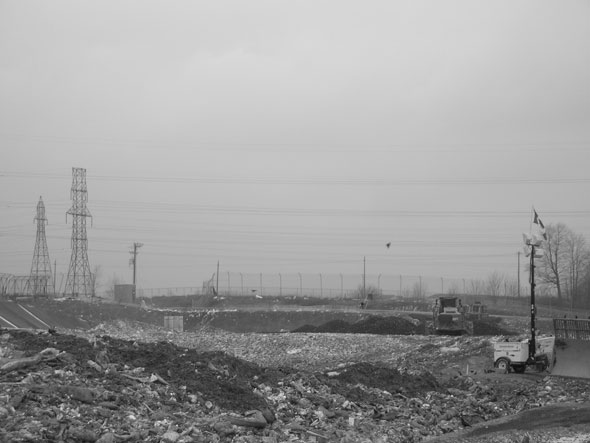 It was in early December that I first got the call from a friend of mine. It was from a Toronto Lawyer; one who has devoted herself to anti-oppression legal system-based activism, and who is also the primary legal advisor for the local activist group—AW@L—that I am a member of. Within a few days of that phone call, a car full of Laurier students was on the road out of Waterloo towards Cayuga at 4:30 on a Monday morning. We were to stand in solidarity with members of a small grassroots environmental organization and with members of Six Nations. At 10:30 in the morning, standing on a road in gusting winds that had the temperature down below -20, we turned around the first of two dump trucks (that day) full of institutional and commercial waste bound for the Edwards dump on a small rural road in Haldimand County. Toronto is the ‘yet-to-be-confirmed’ source of the garbage.

In 2000, Haldimand Against Landfill Transfers (HALT) was formed in the township of Cayuga as a grassroots attempt to clean up a landfill that is, by any consideration, a tragically placed dump site. The site sits on the Grand River Watershed and less than a couple kilometres from the river itself. The site also sits on a wetland, which means that any toxins leaching into the ground will not only reach the watershed quickly, but will also be absorbed in the ecosystem that supports the local farms and wildlife. When a group of concerned citizens of Cayuga found out that the site also sits on (or near) old mining tunnels, which means that toxins are leaching directly into the groundwater, they finally decided to act. They petitioned the Provincial Ministry of the Environment (MOE) to get the dump site cleaned up. They were refused.

The problem, according to the MOE, is that while there is proof that toxins have leached into the land and the watershed, the dispute is over whether toxins have migrated from the source water and into the aquifers of the neighbouring townspeople—whose tap water has “only” been found to contain traces of toxic materials. A resin plant, which had operated in Cayuga for over 30 years (but is now closed down), dumped the vast majority of its waste at the Edwards site. The waste from that plant contained highly toxic substances: polycyclic aromatic hydrocarbons (PAHs). HALT insisted that it was in everybody’s interests for the Province to perform a survey to determine whether or not PAHs had leached into the ground—if so, it should be Province’s responsibility to clean it up—and that given that fragile nature of the land where the site sits, no new waste should be dumped there, ever. Again, the MOE refused.

So a group of mostly elderly residents—some of them with University aged children, some with grandchildren—farmers, and local professionals started a multi pronged campaign to “HALT the dump.” They circulated local petitions and worked with municipal governments and local representatives, and they also started a legal battle with the MOE and engaged in numerous exhausting activities to fund that trial. Four years after starting their attempts to get the dump cleaned up, HALT lost their court case. Out of ideas, they took to picketing Highway 54—the main highway through Cayuga—where it meets with Brooks Road, the road leading to the dump. That was when members of Six Nations decided to take action, and to help the people from HALT to convince the Province and the dump operator to clean up the mess and shut down the dump.

The connections between HALT and Six Nations are numerous, the primary one being a deep concern for the land; wanting to preserve its integrity and ensure that their grandchildren and grandchildren’s grandchildren can still share the same relationship with the land that they have. It is also the specific land in question. Cayuga, a town named after one of the Six Nations, is on the Haldimand Tract—a tract of land that sits 6 miles on either side of the Grand River. Kitchener-Waterloo sits on that same tract of land, and that is a big part of why AW@L was there. The Haldimand tract is land that, historically speaking, is still under Six Nation’s jurisdiction.

And so at this intersection in Cayuga Ontario, people from various places along the river came together, declared themselves in solidarity with each other and the earth, and said that, regardless of what the courts say, the land will not be destroyed for the short sighted gain of the few. For student-activists from AW@L, this was an obvious struggle to immerse ourselves in: for if the local “peaceculture” activists won’t support environmental and social justice, who will?
And while the struggle continues in Cayuga and elsewhere, this carries an extra meaning for AW@L and the KW community. There have been the beginnings of talk that Six Nations may begin to seek the control over lands within the region which is implied by their longstanding assertion of right to title. Some people are scared of what this means, but it need not be seen as anything threatening—it is in fact a wonderful opportunity. We must first accept the historical fact that this is their land, and thus that our government has been terribly deceitful and duplicitous in denying Six Nations access to and control over their own lands. And second, we must not allow fear over the uncertainty of our own identities to cause us to view these assertions of rights in personally confrontational ways. Communities should consider embracing the opportunity to work with First Nations in creating environmental justice and sustainability. The other option would be to see this opportunity instead as a threat to our unentitled privilege. We can either act as our claim to “most intelligent city” would suggest, by fostering a new age of cooperation between indigenous and settler communities, or we can choose to be the rednecks dragging this country downwards towards ignorance and racism. The same goes for our relationship with the earth; we can either work cooperatively towards a common stewardship, or we can continue down the road to destruction—water toxification, air pollution, oil addiction, deforestation and all.