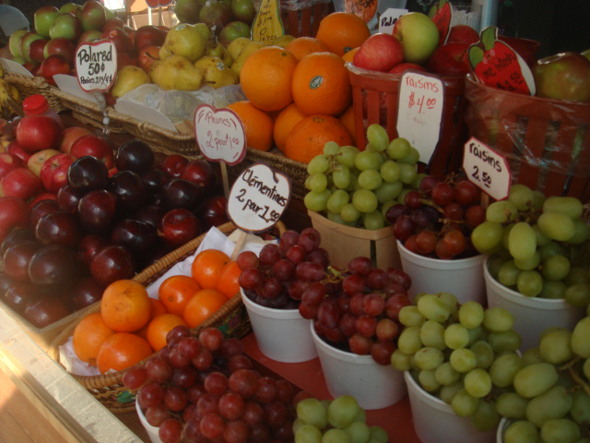 I’m called upon and asked to continue slicing up a pineapple. In the dimly lit classroom I stand up and approach the task at hand, feeling the piercing glare from the rest of my peers. I take a squirt from the hand sanitizer that accompanies my spread out newspaper, a plastic cutting board, an array of sharp knives and of course, the focal point of the project: a pineapple. It’s time to slice and dice.

I picture at once a herbaceous perennial plant baring a fruit wrapped in rigid bark locking in a tender, ripe fruit. A fleshy inside. Layered, resembling the sedimentary rock of the Canadian Shield, that easily tears and as you eat it, the moist nectar drips around the fingers and lips, running down the chin revealing a unique tang. I have no choice but to taste it, and the tang accentuates the taste buds, reminding me of summer. I forget there’s snow outside.

It reminds me of scorching summer days and how my father would cut up chunks of the fruit and bring it into the backyard for my friends and me to eat while we guzzle copious amounts of beer. We share the fruit and celebrate vacation and drunken debauchery, and it brings us closer together; a topper to the alcohol – a chaser in some instances. I can’t help but remember my father having chunks of pineapple stuck in his moustache and failing to realize it from the numbing effects of the ice cold drink.

I slice another slab and toss it on the plate, like dad does. I cut out the core, the dead left behinds. “Sometimes you just have to cut away the dead flesh,” as my father would often remind me.

“Like a coyote in a bear trap, in order to survive they eat off their own paw; you’ve seen three-legged dogs haven’t you?”

I can picture the stump now actually, and the memory fades.

I plop down another piece. I feel the power of the knife, the gliding motion of the razor sharp blade penetrating and slicing through the yellow, tangy fruit. I can smell the pineapple – the unique smell of the juice – a juice which is easily mixed with rum to great appeal. Try a “Pineapple Spritzer”:

Pour rum over pineapple chunk in a tall glass
Add pineapple juice and sweet and sour.
Top with Sprite.
Stir and serve.

The smell associated with a pineapple isn’t easy to describe; a tang that reminds me of summer, a sensory trigger that makes sense because of pineapple’s association to the tropics.

People say pineapples remind them of Hawaii, but I think of my own personal Hawaii, how the accompaniment of the fruit mixed with heat, rum, friends and family by the pool is no different than Hawaii- with addition of the occasional lei for good measure.

We played football with one once, it tore apart my nipples because I bit the bullet and was on “Team Skins.” There’s nothing more rewarding than catching a pineapple Hail Mary only to have its crown leaves penetrate your eyes, ears and nose. My grandmother told me once she would feed me cantaloupe and pineapple when I was teething which amazes me because she’s always been off her rocker. Knowing her, she would probably have bought a pineapple infested with mealybugs. Mealybugs vector wilt disease and I could picture my fruit sticky body wilting like a rose and looking something like a young/old Benjamin Button (thank you F. Scott Fitzgerald).

Remaining at the desk, I continue to chizzle out the core of the ripe fruit. They say the core can’t be eaten without effect, but I’m sure it has been done. People act like the core is Plan 9 or something, but really it’s no different than a peach pit: both will apparently make you extremely constipated.

The amount of congeries my professor will come across in these proceedings crosses my mind and my stomach begins to rumble. Naturally, I begin to see food in my near future. I ingest another slab of pineapple and think of pizza; cheesy, gooey, Hawaiian pizza. You know that feeling you get stepping into a pizza parlour, and that smell of baking dough punches you in the face, that bell rings signaling your arrival and the entire staff peers over like Linda Blair in The Exorcist? Or Pineapple glazed ham, glistening in the oven with toothpicks holding bits of ham in place all around the moist slab of meat. I’m a long ways from class at this moment. Did you know that Chicago is a slang term for pineapple? “One Chicago sundae please.”

The movie, Little Nicky, starring Adam Sandler as Lucifer’s son makes clever usage of the pineapple. There is a scene in which Hitler, in a maid’s uniform (dust feather and all), enters to choose a pineapple out of a cabinet only to have it inserted rectally by none other than Satan himself. And with that I suddenly have no desire to eat anymore.

“Alright, who’s next?” shouts my professor.