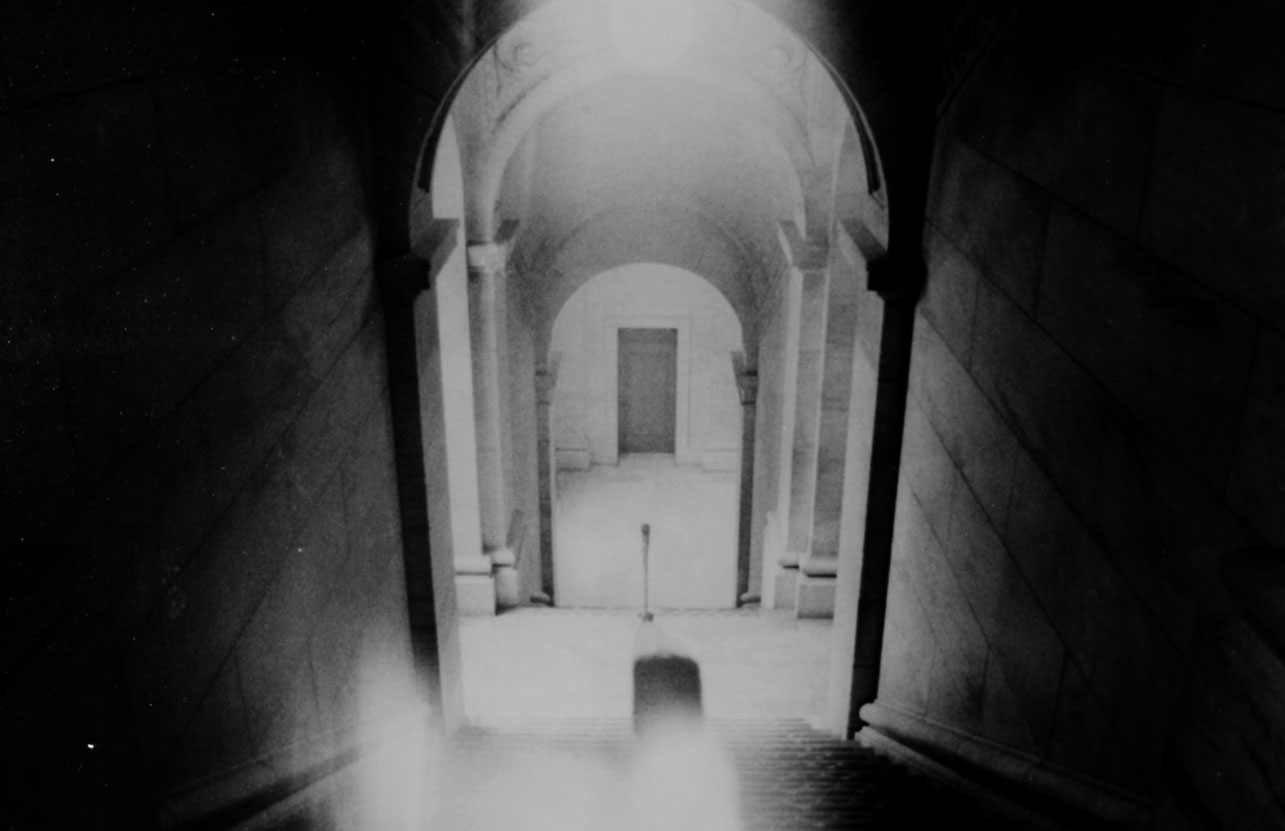 Swim forward to the edge of the pool before she fell, before you found out that the saccharine in her smile would never be enough for your hungering cells. Talk to her. Do it, before you can’t.

Hello, you say, clambering over slick tiles. The chlorine is burning in your lungs. She’s looking down at you and you’re looking up at her and the sunlight behind her is making a crown out of her hair.

She doesn’t say anything. She tilts her head. She walks away. Her shoulders say you’re not worthy of her. Your chemical slurry is saying you are.

Go back to the doctor’s office where the old women sit, pouring over an old Chatelaine in unison. They prod the pictures of squash lasagna and mushroom-drizzled meatloaf like visitors in a museum. You’re sitting across from them, numb, cold, stomach churning at the sight of the food you can’t eat.

The diagnoses rings in your ears like the death toll.

Walk toward the green light at the end of the street and bend down. In the grass, some kid’s left a flashlight, a novelty that can switch between colors of light with the press of a button. You pick it up and lie down with it crossed over your chest.

Above, the stars are invisible. You make fireworks with the flashlight and think of glass and blood.

Lay parallel to the water. You float on your back until the spots on your cornea turn a sickly shade of green. Then you dive: you twirl and twist as your stomach does.

Think as your lungs struggle for air. You can see her in the back of your mind, lounging on the deck, legs supine and covered in sunburnt constellations. It makes you sick.

She is synonymous with your disease.

The sky is graying. Your glass bottles and vials are squeezed into an overstuffed locker. She’s still there, infinitely taunting you from across the water.

You sink down again.

Press your head against the headstone and suck in the snot and the pain. This is your third time – in one week, three times – you know you shouldn’t but you can’t stop thinking about the maggots wiggling away in empty sockets, chewing at the ligaments and making quick work of the marrow.

You feel weak at the knees. Maybe it’s the ero guro film playing in your head or maybe your blood is screaming for attention.

You haven’t had any in your system since you downed thirteen yesterday, hands shaking like an old man’s.

Beside her, the mother presses a mirror under her neck, catching the sunlight. They’re talking, but you can’t hear their voices until she looks up at you.

She mouths the words him, him over there, the one with the –

You sink below the surface again before she finishes her accusation, leaving behind a stream of bubbles as long as your lungs.

Push the papers away and tell her you’re fine. It was just a relapse. The nurse eyes you and asks you if you’re trying to kill yourself.

It takes you a second to register that she’s joking.

The rain thunders on the surface of the water and everyone’s clambering to get out, streaming over concrete and tile in a haze of flesh and chlorine. You get a foot to the shoulder as you follow someone up the metal ladder, skin shivering against the steel.

You’re on the deck and running for your bag when you see her, hiding under her mother’s mirror, quivering in the grey. You curl your lip and grab your bag and watch, hapless, as a bottle you forgot streams from the open pouch and shatters on the deck. You don’t stop to brush away the glass. You don’t have to stop for anything. You’re just like her.

The flashlight is starting to flicker out. It was trash, you realize – useless, forgotten – not something wanted and missed. You throw it aside in the grass and sit up. The light still plays across your field of vision.

You’re standing under the lifeguard’s awning, waiting for the storm to pass. Across the deck, they’re hurrying in unison. You watch as she forgets her sandals and rushes on regardless.

They’re worried about perms and fake tans, plastic breasts and skin. You want to laugh but your adrenaline’s shot, the dopamine in the chemical water a thousand years old.

They’re running now and you’re watching the glint of the glass as the rain sizzles over concrete and tile.

(She forgot her sandals, you think as it happens. You want to tell her to go back, but you can’t. You don’t care.)

You look away as she screams and lifts her foot, shards of glass cutting lines into soft skin. The blood is bright and infallible even in the half-light. You look and look away. It all happens so quickly. She stumbles and her head, cracking against the tile, out of mother’s reach, body slipping – deep end, always off the deep end, always – and now the mother’s left screaming as the half-dead body of her daughter floats to the surface.

Speak, says the judge. You stand. You’re crawling out of your own skin. You can feel the blood in your veins clawing at the fleshy walls, begging – scraping at the mahogany seats, begging. He is looking at you with indifference.

It was an unforeseeable risk, says your defender.

Maybe this time, you think, still sinking, things will be different.