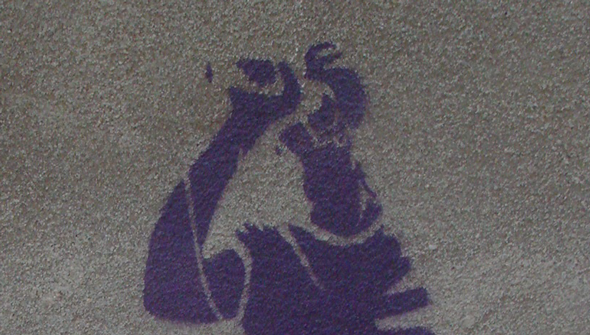 A man and his son are working in the woods when a woman of divine beauty appears before them. “I can grant you long and happy lives if you promise to never tell anyone of this encounter,” she says. The man decides this sounds like a good deal, agrees, and the woman disappears. Their lives carry on and improve enormously; the man becomes wealthy and lives a long life before passing away peacefully in old age. The son becomes a skilled and successful worker, marries a woman he loves passionately, and raises a happy and healthy family. Many years pass like this until on a cold night, while son and wife are sitting blissfully by the fire, the son suddenly remembers the curious instance in his childhood. He tells his wife of the lady in the woods and laughs at its absurdity. His wife looks gravely at him and says only “I told you never to tell” before crumbling before him.

Sound familiar? You’ve probably heard this one before too: One day, a man going about his daily business in his small town. He sees a woman he has never seen before, she is beautiful beyond anything the man has ever seen and he stops to stare at her; but to his surprise she is staring back at him! The two of them carry on like this until the man gathers the courage to go speak to her. One thing leads to another and she agrees to meet him at his house later that night. Upon her arrival the man wastes no time, “You must come to bed with me and become my wife!” He proclaims. The woman concurs but under conditions, “You must give me all of your possessions.”

“And all of your wealth.”

“And the money you have saved for your parents funeral.”

The man is becoming desperate, here she is, in his house, shimmering, and they just continue to stand talking.

She then turns into a hideous monster, deprives him of all his possessions, strips him, and castrates him.

Babayaga, Morgane Le Fay, Lilith, demon seductresses, witches; living in the background of western folk tale history is a pattern that connects women to magic in a strange and scary way. There is an eerie familiarity about this motif. Something about the understood nature of women in western society places them on the precipice between humanity and the unknown.

This idea has been perpetuated before the creation story. The second story, in one of its most ancient forms is called The Romance of Setna Khaemuas and the Mummies and was recorded after the third intermediate period in ancient Egypt. Its presence implies an established oral motif centered around an evil seductress, a pre-existing discomfort with women wielding spiritual or magical power. Politically, at the time the story was recorded Ancient Egypt was shifting, with the beginning of their hellenization they were beginning to structure themselves spiritually into a more organized religion, where there weren’t many female priests to begin with, there soon was none; moving women’s spirituality out of the public sphere and into the private sphere. That is unless, of course, they were evil witches. Its possible this story was one of many that encouraged the belief that when women gained access to magic power they would use it for vindictive, anti-male ways; in the literary tradition of ancient Egypt, women were either using magic against their opponents as a weapon, or taking away their opponents magic, which strips them of their power and masculinity.

Of course the second thing that encourages this theory is the Abrahamic creation story. The creation story has immeasurable and diverse impacts on the way society understands women today. What I want to point out is the implications of the assumption that Eve leads Adam to disobey god. This understanding has led to even more cementation of the already existent motif that women do not have to moral right to be given power. If Eve cannot even resist the temptation of one fruit, how can she be expected to wield magical powers with integrity? From Genesis we see a general mistrust of women involving anything; especially skills that have been historically gendered as female such as: childbirth, child rearing, midwifery, healing, transmission of culture through folk tales, and general sexiness. These things, at one time or another, have been antagonized by the patriarchy as witchy; considering you believe in the inherit evil of women this is logical! Assuming god made women as the property of men and morally dependent on men then there really shouldn’t be skills that women are essentially better at than men; and if such skills exist, its probably witchcraft.

So we see another phenomenon occur. Evidence from the creation story and re-occurring motifs in the cradle of civilization seem to point to magic being linked to women and women being linked to evil; thus, in this context, it is safe to conclude that magic is probably bad news. Nevertheless magic is wildly popular and studied along theology and science for most of history. How is this possible? What occurs is a masterpiece of rhetoric. Think about these words: priest, astrologer, doctor, diviner, scribe, wiseman, alchemist, sorcerer. And now these: witch, enchantress, harpy, she-devil, witchdoctor. One batch of our vocabulary is understood as distinctly masculine, but the skills they describe all fall comfortably under the term ‘witch’ when referring to women. From this we can understand that men obviously do not use magic, they master it. The language used to describe male magicians departs from the realm of mysticism and enters into a system of professionalism.

What were literary motifs, or amusing fables are now weaved tightly into our ideas of magic, skills and gender. Are women dangerously close to the unknown? Or did some ancient Egyptian storytellers just get dumped? Either way, it is quite a legacy to inherit; thousands of years of fear based on sexuality, nurturing and spirituality.