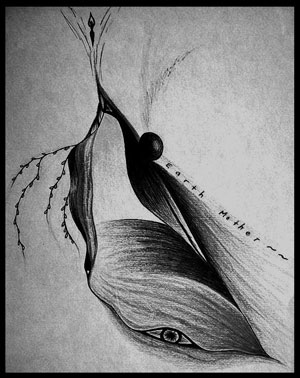 We’re the molecular seizure of regressive progression,
The nuclear insanity of technological absurdity,
The cellular fissure of pill-popping euphoria,
The stormed-out symphony of violent paranoia.
We’re the hierarchical deformation of narcotic vanity,
The militant march of mistaken manipulation,
The mechanical silence of artificial stupidity,
The downward-up, spiral-in, forward-moving step backwards.
We’re a brave-new-world tied up in visions of war-perfect advancement,
The lie-torn salvation of controlled redemption.
We’re the patriarchal matrimony of neglect and repression,
The school-washed products of wasted children,
The paralysis of dumb-downed hot-topic diversions,
The political meandering of mock-endowed celebrity fuck-ups.
We’re morally-not, starved fat, smile-crying, still moving, decay-living, heaven-bound or hell-bound or nowhere-bound, we’re full empty, happy tragic, healthy-sick, the antithesis of justice either rightly mistaken or mistakenly wrong, the end-product shade-mistake of juxtaposed contradictions pretending to make sense underneath masks of make-up-hidden eyes or drug-covered feelings.
We’re the medical partition of god’s choice,
The sacrificial remainders of dying children, countries, continents.
Remember (the molecular seizure of regressive progression)
Or the cellular fissure of pill-popping euphoria like
We’re the paralytic narcosis of subjective misfortune,
Praying and paying for the ever-revolving sameness of breath-movement and loss.
We’re 1968 or 1916 or 1942 or 2019 or whenever,
Listening to the final plea of armageddon’s makers asking for recourse.
We’re the unprecedented (then) under-represented (now) un-presented,
Believing in the failures of lie-promising words over and over again.
We are the product of oligarchic propaganda,
Wrapped up in the idea of a new-hope choice already suffering away like the wind ending.
We’re starving out and rattle-boned
like a second story sold in and selling out.
We are the generational delirium of confounded disagreement fueled by programs and politicians filtering on repeat through the soul of our earth like the space between meaning and blood (now) brewing the disease of our ending so sickeningly slow and religiously sacrificial like the rhyme-lost rhythm of broken moments shallow-drowning in the molecular seizure of paralysis or the cellular fissure of philosophical science bending back the black-holed eternity of broken suns spreading out like sleep-song poems across an expanding universe of galaxies perpetually drifting farther from each other like an earth breathing (or an earth crying) or an earth praying (or an earth decaying) like an earth always ending.
Like we are an earth ending, forever.
So write goodbye but you’ll feel it alone. Write a song but you’ll sing it alone.
Write anything and it’ll end in a good and bye earth ending nothing.